The Future of The NDP 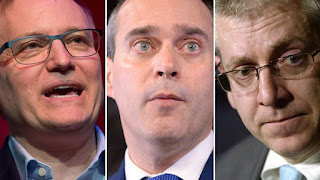 A lot has been written about the Conservative leadership race. But, so far, the contest for the leadership of the NDP has generated little comment -- mainly because, until recently, nobody wanted the job. But now that Peter Julian, Charlie Angus and Guy Caron have put in their applications, attention will tip toward the Dippers.

But, Tom Walkom writes, interest in the party's future does not mean that it will turn to the left. The Leap Manifesto was an attempt to steer the party in that direction. However,

the brief excitement over the so-called LEAP Manifesto — a clarion call to fight climate change — seems to have ebbed.

With the exception of British Columbia MP Peter Julian, who explicitly opposes all pipeline projects aimed at moving bitumen from Alberta’s oilsands, the leadership candidates have been eloquently vague on the topic of climate change.

Angus, an MP from Northern Ontario, says Canada must move toward a green economy and away from fossil fuels. But he also says this must be done in way that doesn’t penalize workers in the energy sector — which is the position of Alberta NDP Premier Rachel Notley, Mulcair and Liberal Prime Minister Justin Trudeau.

Julian and Quebec MP Caron favour a fairer tax system. But they are vague on how they would accomplish that.

Angus has said he wants to find out what New Democrats are thinking before he comes up with specific policy pronouncements on taxes or anything else.

The fixation with taxes indicates that the party -- like Canada's two other major parties -- is still firmly in the grip of Neo-liberalism. And when it comes to free trade and deficits:

Free trade? The NDP used to be against it. But the party has watered down its opposition. Under Mulcair, it actively embraced a free-trade pact with South Korea.

In this leadership race, the candidates to date have taken carefully ambiguous positions on trade and investment deals. Julian wants “fair trade,” a term used by both the Canadian labour movement and U.S. President Donald Trump. Caron says he wants “trade deals that work for Canada.”

Deficits? Mulcair was hammered from within his own party for vowing during the last election campaign to balance the budget no matter what, thereby allowing Trudeau to outflank the NDP from the left.

But the NDP’s official policy, like that of the Conservatives, is to balance the books over the length of any boom and bust business cycle — by running deficits in lean years and surpluses in fat ones.

It appears that all three parties are offering the same menu. The only differences deal with the way they spice up the meal.

LOL. Dippers could've got in the game in 2019 bringing Bernie Sanders. They likely would've formed the government. But instead, out of pure partisan hatred for Junior, they burned his electoral reform initiative down to the ground to cost him politically. (Some kind of self-immolating scorched-Earth gambit: Wile E Coyote style.)

Now that they're back under the boot of FPTP, all they can hope to accomplish is to help the Cons weasel fake majority governments. LOL

Because of them, Canadians get to repeat the Harper era all over again except with Kevin O'Leary at the helm. (Break out the Stop O'Leary! signs. The protesters ought to get rid of him in 8 or 9 years...)

The NDP has no future. Only a slow nostalgic, withering away. Thanks Jack. You asshole.

We'll see MAGA. Change should be a synonym for improvement. These days it isn't. The faces change but the program doesn't.

When you sell your soul, Dana, you're left with ashes.