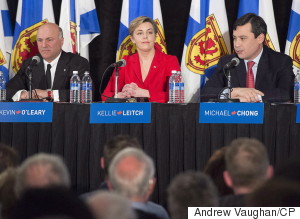 Michael Harris writes that, as the Conservative leadership race comes down to the finish, you have to wonder what the party learned under Stephen Harper's tutelage:

Some days it’s hard to tell if the Dubious Fourteen are political birds of a feather — or warring members of rival motorcycle gangs. There are no excuses for the tawdry display of ego and ambition that so far has passed for a leadership race. For one thing, the party should have learned its lessons from the years of lying, cheating and democracy-busting in the Harper era.


Consider the sound an fury over phony Tories and the echoes of those robocalls:

The same dudes who gave us the In-and-Out Scandal, Bruce Carson, Dean del Mastro, the Duffy/Wright Affair — and very likely the telephone lists of non-supporters for the robocalls affair — is even cheating in its own leadership race. They can’t even replace Yacht Girl without resorting to fake memberships purchased anonymously through the party’s own website.

This is no small matter. Party rules require that memberships be purchased by personal credit cards or cheques. As candidate Chris Alexander said, this was not just a case of people being signed up to memberships without their knowledge. Someone was using software that masked IP addresses and allowed multiple members to be signed up from the same computer — high-tech cheating not entirely unlike the variety used in the unsolved robocalls scandal.


Kevin O'Leary is threatening to use the notwithstanding clause against the provinces:

When was the last time you heard a candidate in a leadership race threaten to use what amounts to the Notunderstanding Clause of the Constitution to impose his policies? Or ask for an audit of his fellow candidates and their alleged party membership sales, as Kevin O’Leary recently did?

Image: Huffington Post
Posted by Owen Gray at 9:54 am

You're right, Toby. Neo-liberalism has affected all the parties. The differences between them are a matter of degrees.

It's pretty pathetic what passes for political issues today Owen. Toby is right about both parties having a neoliberal agenda, which means neither party could care less about creating policy in the interest of Canadians.

I'm not sure I have a good answer to your question, Pam. Somethings are accepted as axiomatic -- in the same way that the earth being flat used to be considered an undeniable truth. When Copernicus and Galileo challenged that notion, they got a lot of unpleasant pushback.

The situation is so bad, the choices so bottom of the barrel, that past Union bashers and Veterans slayers are starting to rise to the top. Man, we have such short memories.

We no longer remember even recent history, zoombats. Our politics have become a variation of the plot for the film Groundhog Day.