Is Trump A New Carter? 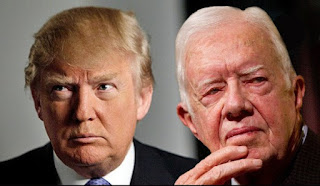 Conservative commentator Ross Douthat argues in this morning's New York Times that Donald Trump may be another Jimmy Carter:

But with the release of the House Republican “replacement” (I use that term loosely) for Obamacare, it’s worth returning to the analogy. It rests, in part, on the work of the political scientist Stephen Skowronek, who argues that certain presidencies are “disjunctive” — straddling a political order passing into history and another one struggling to be born. And “disjunctive” generally means ineffective, because the parties such presidents are leading are likewise trapped between past and future and unable to unify and act.

In the long Reagan era, the Republican Party was, in effect, the party of the health care status quo — bending to accept certain expansions of the welfare state (S-CHIP, a prescription drug benefit in Medicare) in order to forestall a larger government takeover of health insurance.

By the late 2000s, however, the decline in employer-provided coverage and the steady rise of health care costs made status-quo politics untenable: Too many workers who made too much to qualify for Medicaid were unable to afford insurance. Meanwhile, over the same period, Republicans were winning more working-class votes, which meant that their own constituents increasingly stood to benefit from a coverage-expanding health care reform.


When it comes to public healthcare, the Republicans are still the Party of No

because the party’s limited-government ideology was hostile to increased spending, and many of its strongest interest groups stood to lose out from reform. So resist the G.O.P. did — sometimes by embracing a more libertarian vision of health care, but more often by incoherently and opportunistically attacking whatever the Democrats proposed.


And now that they are in the driver's seat the Party is attacking what its leaders propose. They are what they have been for a long time -- an opposition party which has forgotten how to govern.

Trump may, indeed, be the next Carter.

Email ThisBlogThis!Share to TwitterShare to FacebookShare to Pinterest
Labels: Trump And Carter

The birth of neo-liberalism came at the end of the long post-war boom that had seen unprecedented rises in incomes in most Western countries. But the shift to neo-liberalism was particularly quick and noticeable in the US because the Republican's "Southern Strategy" was able to take advantage of the racism and backwardness of middle America and make it very hard for the FDR social democrats to hold office en masse. Neo-Liberalism spread more slowly in other countries because the ideology took time to grow (largely with the help of corporate media). Anyway, Carter was the last of the post-war Democrats to hold the White House, and 12 years later Clinton radically reshaped the Democratic Party into a neo-liberal machine. The abject failure of neo-liberalism and the realization (even by mainstream economists) that something is rotten at the heart of capitalism as it now exists, are sure signs that that "long-wave" is ending. If the US is where the future comes to rehearse, (and Canada is its understudy), the disarray of the Conservatives into a party that has little to trade on other than its anger and racism, this demonstrates that transition is inevitable. Where we will land is another question altogether.

By the way- what Ross Douthat fails to comprehend in the NYT article is that it doesn't really matter how "strong" or "savvy" a Republican leader is at this point, they are now in the grip of history not policy. The rightwing has two choices at this point, admit at some level that neo-liberalism was a failure and adjust their ideology accordingly (which means admitting things like lowering taxes doesn't bring prosperity) or turn to some form of neo-fascism. I think that these are just the basic demands of history, and as Marx said - people make history, just not in circumstances of their own choosing. It looks like they are made their choice for now.

I agree, Kirby. The conservative centre cannot hold. But where we will land is an open question. At the moment, we seem to be moving toward a 21st century fascism.

It's important to realize that the entire political spectrum has succumbed to neoliberalism. In our own country that includes the NDP. In the US it has led to political capture (a "bought and paid for" Congress) followed by regulatory capture and now an executive itself captured by corporatism.

Douthat's premise that Trump has forged a workers' party is fanciful. Look at how Trump is moving to deregulate, gut environmental protections, expand tax cuts for the rich (furthering already massive inequality), and suppress organized labour. There isn't a single appointee to his cabinet who could be considered remotely progressive. At best it's a Potemkin workers' party, a facade.

Douthat is falling for the by now ubiquitous Trump trap - he's going by what Trump says and ignoring all the contradictions in what Trump is actually doing. Douthat also believes that America remains a democracy, something it jettisoned a good long time ago.

Thanks for the link, Mound. The last conclusion is particularly stunning: "Influence is massively unequal." The preliminary analyses of the Republican plan seem to confirm that conclusion in spades.

If racism and neoliberalism are related, we dodged a bullet when Hillary 'Super Predator' Clinton lost the election.

She was a huge neoliberal and gargantuan racist. The Clintons' 'Southern Strategy' of the 1990s, which called for a massive crackdown on inner-city Africans ("they must be brought to heel"), was the most racist of any president of the post-war era.

Maybe in 2020, the Democratic party will cut all ties to its neoliberal past and no longer be the party of looting bankers, global oligarchs, mass-incarcerating racists and civilian-murdering war criminals.

I agree that Hillary is a neo-liberal, MAGA. But calling her a "gargantuan racist" is simply absurd.

.. the salamanders find you guilty Owen, of sending out a stalking horse..

The comments are very very interesting.. the article less so..
as we see its very premise nonsensical.. implying there is any coherence to the Trumph regime. Kirby nails some great points as does the Mound.. but what seems lacking is the term 'corruption'. Perhaps a better term might be 'me first'. What the Trump Bannon Miller et al regime has wrangled into a workable, indeed electing force is corruption, me first, ignorance, racism & greed. Its not that complicated really, to see that Hillary was just too tainted, with too much baggage, and Trump just slid into the resulting void. Bannon et al rode into town in the caboose. Both political parties are now farcical, and dangerous. The GOP especially so.. as they are 'armed' and dangerous.. along with the previous descriptors such as ignorant, corrupt etc. They can now bellow 'fake news' while lying their asses off with impunity.

The four years of Trump & Bannon will be horrifying to redress. The corruption at State & lower governance levels will become more entrenched. The 'captured government' per Mound will simply become business as usual, amplified. Business will be Government. That is exactly what Trump represents.. since that is what political parties represent.. Business runs for election.. the surrogates of Business are Lobbyists. They are the pipeline pigs of 'power' and funding.. and the bearers of back channel clandestine news, needs and direction from Business to their Government.

It's not the first time I've been accused of sending out a stalking horse, salamander. Corruption is central to everything. This is all about buying the government you want. And those with the money get what they want. Trump is the prefect personification of that phenomenon. There are many others who hope to be as "successful" as he has been.