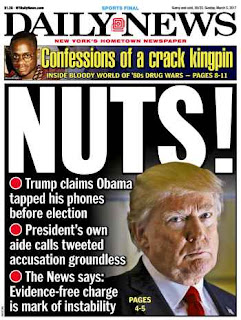 Reports are that Friday was a rough day at the White House. Having discovered that his attorney general had recused himself from all investigations of Russian meddling in the American election, Donald Trump went ballistic and reamed out his staff for allowing Jeff Sessions to step aside. Then he headed to Florida to play golf. At six o'clock Trump sent out a series of tweets claiming -- with no supporting evidence -- that Barack Obama had tapped his phone. Michael Harris writes:

What he came up with was fresh from the outbox of Elsie the Cow.

Even the language was improbable. Do you know anyone who suspects they are under covert surveillance who says they had their “wires tapped”?

Most people would say “I’ve been wiretapped.” Or that “My phone’s been tapped.” Who says “I just found out I had my wires tapped.”? What wires? The ones sticking out of his tin-foil hat when he communes with Agent Mulder’s clientele?


Once again, Trump revealed his ignorance of the government he is supposed to lead. The law specifically forbids a president from doing what Trump claims Obama did. Trump's phone could only be tapped with the approval of a judge. And former Director of National Intelligence James Clapper -- who was in office at the time the telephone would have been tapped says he is not aware of any such authorization.

Trump is engaging in an old tactic --  the counter suit. When Trump went bankrupt in 2008, Trump went to court an argued that he shouldn't have to pay back the money because the Great Recession was an extraordinary event. In fact, he told the court that Deutsch Bank -- by his calculations owed him $3 million. Harris writes:

Trump is indulging in self-exoneration. He is not only saying that every intelligence agency in the United States has it wrong; he’s saying he is the victim of a wire tap, just now uncovered, that he wants the Congress of the United States to investigate.

Get it? Congress and the FBI are investigating the wrong president. They shouldn’t be investigating Donald J. Trump, America’s most patriotic plutocrat. They should be looking into whether one of the most popular and scandal-free presidents in American history abused the investigative powers of U.S. law enforcement in his final days and tapped into the Trump Towers looking for dirt. The Trump counter-punch is always aimed at the crotch.


There is a method to his madness. But it's still madness.

The only question seems to be "When are the men in white coats coming to get him"?

As the Americans say, Rural, he's a "clear and present danger."

As a guy on Twitter named Steve Redmond tweeted today: The NSA confirms it wasn't a wiretap - it was a baby monitor.

It makes you wonder who puts him in his crib at night, Dana.

The term I prefer, Owen, is "barking mad." It's one thing for hyper-partisan, domestic consumption but a far more serious problem at the international level. The serving general commanding US Special Forces, described the state of the Trump White House as "unbelievable turmoil," adding that “As a commander, I’m concerned our government be as stable possible.”

They understand that Trump is weakening America, inviting its adversaries to exploit the glaring vulnerabilities. If Trump shows himself incapable of rising above - well, Trump - his commanders might quietly begin pressing prominent Republicans for his removal. The Deep State indeed.

The Russians ate my homework. There is smoke, I expect to see some fire. The FISA records already say they did one investigation with Trump on the margins, where there more?

I think Trump is a very smart clown but is an IGGY factor that the Democrats need to exhaust or we are all lost.

The cognitive dissidence between Trump and some of his cabinet officers can't continue forever, Mound. Something -- or someone -- will have to give.

What do you mean by "IGGY factor," Steve?

Owen, Iggy was Harper with a pedigree.