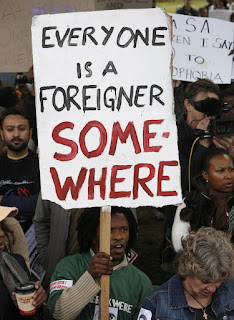 Canadians like to think that, as a nation, we value diversity. Bob Rae reminds us that we haven't always felt that way:


Canada’s commitment to diversity and pluralism has become a critical feature of our identity. For many generations we were no such thing — a deputy minister of immigration in the 1930s was asked how many Jews would be admitted that year. His reply was devastatingly simple: “None is too many.” Chinese immigrants paid a head tax. Japanese and others were rounded up and lost all their property and livelihood in the Second World War. The litany of exclusion and discrimination is long — and we lapse into it still today.

A particular kind of brutality was imposed on the indigenous community. Children were rounded up and taken away to boarding schools whose mission was appallingly simple — “to take the Indian out of the child.” This was the policy of the government of Canada from the 1830s to as recently as the early 1990s. The Chief Justice of Canada has called it “cultural genocide.” This is the system a Tory Senator wants to defend and find the “positive parts of this experience.” This mind boggling comment has rightly set off a firestorm.

South of the 49th parallel, there is a rising tide against people who don't look and sound like us. And -- particularly in the Conservative Party -- one hears echoes of Trumpian nationalism. Rae warns that:

The blustering nationalism he now champions runs contrary to everything America has stood for in the world. Other countries will have to counter what he is doing and saying by insisting that pluralism, openness, and embracing the dignity of difference need to lie at the core of international politics.

“America First” is a dead end, because it will only lead to everyone else insisting on the same protectionism.

We should learn from our own history. And we certainly should not repeat the American present.

Email ThisBlogThis!Share to TwitterShare to FacebookShare to Pinterest
Labels: Xenophobia

Has Bob Rae ever had a thought that wasn't rooted in some brand of absolutism? Is it just the unrelenting practiced politician in him or does he really take the rest of us for fools?

I won't be lectured on Canadian values or the critical features of our national identity by either Kellie Leitch or Justin Trudeau, and certainly not by Mr. Rae when he slides in a reference to "protectionism" when issuing a caution on the corrupting influence of blind nativism. Does McKinsey edit and amend his pronouncements as well as Justin's?

Post-nationalism be damned. And the same for enlightened sovereignty.

Enlightenment of any kind is hard to come by these days, John.