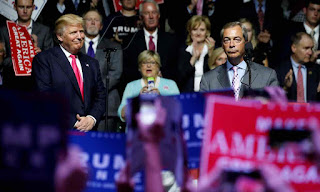 Around the world, populism is shaking the foundations of what were once liberal democracies. Larry Elliott writes:

The rise of populism has rattled the global political establishment. Brexit came as a shock, as did the victory of Donald Trump. Much head-scratching has resulted as leaders seek to work out why large chunks of their electorates are so cross.

The answer seems pretty simple. Populism is the result of economic failure. The 10 years since the financial crisis have shown that the system of economic governance which has held sway for the past four decades is broken. Some call this approach neoliberalism. Perhaps a better description would be unpopulism.


That's an interesting word. Elliott defines it as "tilting the balance of power in the workplace in favour of management and treating people like wage slaves." It is a system which has been "rigged to ensure that the fruits of growth went to the few not to the many. Unpopulism decreed that those responsible for the global financial crisis got away with it while those who were innocent bore the brunt of austerity."

And rather than reversing things, the last ten years have only made the situation worse. Consider how things worked before 1975:

During the business cycle upswing between 1961 and 1969, the bottom 90% of Americans took 67% of the income gains. During the Reagan expansion two decades later they took 20%. During the Greenspan housing bubble of 2001 to 2007, they got just two cents in every extra dollar of national income generated while the richest 10% took the rest.

The US economist Thomas Palley* says that up until the late 1970s countries operated a virtuous circle growth model in which wages were the engine of demand growth.

James Montier and Philip Pilkington, of the global investment firm GMO, say that the system which arose in the 1970s was characterised by four significant economic policies: the abandonment of full employment and its replacement with inflation targeting; an increase in the globalisation of the flows of people, capital and trade; a focus on shareholder maximisation rather than reinvestment and growth; and the pursuit of flexible labour markets and the disruption of trade unions and workers’ organisations.

To take just the last of these four pillars, the idea was that trade unions and minimum wages were impediments to an efficient labour market. Collective bargaining and statutory pay floors would result in workers being paid more than the market rate, with the result that unemployment would inevitably rise.


And Mr. Trump and those who favoured Brexit have no intention of reversing what has happened.

Email ThisBlogThis!Share to TwitterShare to FacebookShare to Pinterest
Labels: Neoliberalism And Unpopulism

Now we have the Internet and robotics changing things so fast that we may see 40% to 50% unemployment by 2030. The big challenge will be to redistribute wealth so that the whole population benefits. The rich and powerful will not be allowed to keep it all. As with previous high stress situations, there will be a breaking point and the pitchforks and Guillotines will appear.

History's pretty clear on that score, Toby. When wealth becomes too concentrated, those who have none storm the Bastille.


Mankind, generally, and Westerners in particular are at a confluence of truly seismic events. Our models of organization - political, economic, even social - have outlived their utility yet effective change is always resisted and generally thwarted from above. The Koch brothers exemplify how far our modern oligarchs will go to prop up the status quo that operates so heavily in their favour.

We whine and bitch, moan and groan, about our plight. We analyze where we went wrong, how we were led astray, and why our political-economic model fails us. We've been doing that - masterfully - for at least 15 years and yet, by and large, we always stop well short of formulating something better. We have a general idea of what we want but it's usually framed as some opposite of what we're doing now. Vague, ad hoc generalizations that go nowhere.

In his 2005 book, "The End of Globalism," John Ralston Saul has a helpful exploration of several economic models from the past that reveals nothing, certainly not our globalized trade regime today, is chiseled in stone. Changing modes that don't work is in our DNA yet we lack that essential imagination today. One example Saul cites is ancient Athens and how it responded when its economy had become moribund due to excessive debt levels. The Athenians came up with an answer and it worked to revitalize their economy and restore prosperity. Their answer? They simply cancelled all debt. Wrote everything off. Everyone started with a fresh slate and the economy just took off.

Sadly we don't have the leadership that flourished in Athens. Our leaders today are indentured to neoliberalism, petit fonctionnaires, administrators and technocrats. You'll never have vision from those people because they're deeply embedded in the system that fails us. That goes as much for Trudeau as it ever did for Harper. They're the high priests of perpetual, exponential economic (GDP) growth. It takes a religious mind to do that, to take on faith what is obviously untrue.

Change is coming but it probably won't be of our choice. There are so many potentially seismic forces in play that it's hard to predict which one or combination of forces will tip our boat. Civilization - political, social, economic - whether local, regional or global has an Achilles Heel - the need for relative stability. We have enjoyed relative stability since 1945 and it led us, for a while, to genuine, broadly shared prosperity. We could have extended that run of good fortune but we chose to abandon caution and common sense for the chance to get rich quick, at least for some and now we find ourselves dangerously over extended. We have grown our economy so large that it now stands at 1.7 times Earth's carrying capacity. That's bad enough. Much more dangerous is our absolute dependence on that sort of overconsumption in a way that is perpetually exponential in growth. Our take home pay is a thousand a month. We're spending 17 hundred and our sole objective is to spend 18 hundred as soon as possible.

Now imagine if we twigged to the idea that the economy could never be larger than the environment, our ecosystem, spaceship Earth. That would mean sharply curbing our spending. Instead of 17-hundred a month, we would have to get down to maybe 800. We are going to get there one way or the other. If we don't choose that path we'll be forced onto it.

We could pursue policies of sustainable retreat to shrink our per capita ecological footprint. But what leader would propose that sort of change and, if she did, what would befall her at the ballot box?

No, neoliberalism it is and shalt be until we arrive at some upheaval event. I wonder what it's going to be. Will it be overpopulation, over-consumption, climate change, the freshwater crisis, robotics and automation. They're all linked in ways we stubbornly refuse to acknowledge and it's those bonds that force us to find solutions to all of these challenges if we're to truly resolve any of them.

Ralston Saul has always admired Canada's First Nations for their emphasis on sustainable development, Mound. They have always known that Nature has its limits. They've known for a long time that disregarding those limits leads to disaster.

Thanks for the link, Mound. "It’s only [due to] our complete disdain for the poor that we don’t solve the remaining problems of global poverty.”

We live in an expanding,populous, world of unrealistic expectations.
The world is divided between those that have and those that don't .
The difference is how to divide the spoils of our human endeavours.
It would seem that few take a moment to count the resources required to feed this lifestyle .
The resources are finite yet the demand increases with population growth.
Arguing that the Koch brothers ( cock in German) take more than their share is a moral one ; not a practical one.
Progressives fall in to the same trap that the Neocons do that wealth distribution is the key to our ills.
Humanity has hard choices to make especially when we are at the verge of a robotics, AI breakout.
"The End of Globalism," John Ralston Saul has a helpful exploration of several economic models from the past that reveals nothing, certainly not our globalized trade regime today, is chiseled in stone. Changing modes that don't work is in our DNA yet we lack that essential imagination today. One example Saul cites is ancient Athens and how it responded when its economy had become moribund due to excessive debt levels. The Athenians came up with an answer and it worked to revitalize their economy and restore prosperity. Their answer? They simply cancelled all debt. Wrote everything off. Everyone started with a fresh slate and the economy just took off.
RE,

I like Saul but he is a hard,to me, read.

"The End of Globalism," John Ralston Saul has a helpful exploration of several economic models from the past that reveals nothing, certainly not our globalized trade regime today, is chiseled in stone. Changing modes that don't work is in our DNA yet we lack that essential imagination today. One example Saul cites is ancient Athens and how it responded when its economy had become moribund due to excessive debt levels. The Athenians came up with an answer and it worked to revitalize their economy and restore prosperity. Their answer? They simply cancelled all debt. Wrote everything off. Everyone started with a fresh slate and the economy just took off.


All this does is to restore the status quo.
Un ending consumerism will prevail!

I propose the opposite of the Mound. we can only save the earth through massive spending. We have the tech and the capacity to live with a zero footprint, and all it takes it cash and will. A Hydrogen economy, drinking our own piss, 100% recycling, mass transit.

You're going to have a hard time selling your new beverage, Steve.

Owen they already do it in Sinagpore!

True, Steve, but I'd expect push back on that one.

Thoughtful comments by Mound and your regulars and your short replies always add to the discussion.

In regards to the back and forth by contrarian Steve - he sets himself up as your constant foil... and your short, respectful and precise replies, well for example today's "You're going to have a hard time selling your new beverage, Steve." is a slam dunk. Steve's comeback and your second reply both three pointers.

I always learn interesting insights when I visit your blog. Much appreciated.

Thanks for your comment, Bill. The goal is here is to develop a civic -- and civil -- dialogue.

I believe that there will come a point where unfettered consumerism will fail.
It will fail because we cannot have endless credit/debt.
Credit/debt equals at best a serfdom and at worst slavery.
Sooner or later we will wake up or be zombies to the corporate state.

That's the choice we face, TB. At the moment, I'm not at all sure which one we're going to make.