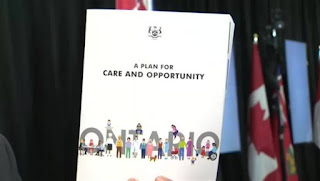 It cements in place Wynne’s earlier commitment to universal pharmacare by eliminating the deductibles and user fees that 2.6 million seniors must currently pay when they use the Ontario Drug Benefit program.

It introduces a rudimentary denticare program for those not already covered by workplace or public plans.

And, as the piece de resistance, it pledges to introduce free daycare for all children from the age of two and a half until they reach kindergarten.

To help pay for this, it raises taxes by an average of $200 per person for the 1.8 million upper and middle income earners who make more than $95,000 a year.

Along the way, the budget promises much-needed money for those the Liberals have stiffed before, including hospitals, long-term care residents and the poor.


Kathleen Wynne is betting that -- as was the case with Justin Trudeau's Liberals -- Ontarians will be willing to tolerate deficits to get these things. And you can bet Doug Ford and the PC's will hammer the Liberals for their red ink.

But Walkom writes that the real question is: Can we trust you? In the past the Liberals have not kept all their promises:

Will the Liberals suddenly find their promises too expensive to implement?

Will they find, as they have before, that times have changed, that the fiscal situation has deteriorated and that, sadly, circumstances demand cutbacks and the privatization of public assets.


The NDP haven't released their platform yet. But Andrea Horwath seems to be signalling that she will outspend the Liberals.

Walkom calls the budget "a masterpiece of social democratic policy." But is it for real? We'll see. It should be a very interesting election.

Remember when Hudak said he would find $2 billion in "efficiencies" by letting go 100,000 public employees? Well, DoFo's decided to triple down on that ill-fated promise and claims his superior business skills will allow him to find $6 billion in savings!

The Star's Nathan Laurie looks at how he might get there. He could
- close 1 in 5 schools and lay off 66,000 teachers
- rip out half the budget for higher education
- wipe out the entire justice system, but that would only save $4.7 billion
- slash Children's and Social Services by 35%, or
- cut 30% out of every other government program.

Wynne's promises have the strong whiff of deathbed desperation, Owen. She won't have my vote,no matter what she does; her betrayal of all of us in the 60% selloff of Hydro One is something I just can't forgive.

We've heard Ford's line before, Cap. And we know where it leads.

There is the Horvath option, Lorne. The question is, which of the choices -- other than voting for Ford -- ensures that he will become premier.

DoFo stepped in it already. He said a family of five will pay $1,000 in extra taxes. Yes, if each member of the family earns more than $130,000 per year! Good thing he cares about "the little guy"!

That's the Ford salespitch, UU4077. Ford likes to think of himself as a little guy. He isn't and never has been a little guy.


I sense that the electorate, at least in Canada, is now less willing to forgive and forget their political leadership than they might have been in the past; less willing to simply wipe the slate clean. Perhaps it's grounded in the more difficult, threatening challenges that confront us today. I can never forgive Justin Trudeau for his betrayal on electoral reform, his laughing dismissal of "social licence" and that sort of thing. He took us for a ride and the public forbearance that once seemed almost bulletproof is finally evaporating. If Scheer wins the next election it's because Trudeau never consolidated his 2015 victory.

I'm reluctant to say too much about Wynne. She's your problem. It always comes back to the Ralph Nader conundrum. How much are you willing to tolerate for the sake of keeping Doug Ford out of power? Is it time to close the McGuinty/Wynne era? I wrestled with that problem before I decided to cast my lot with the Green Party, provincially and federally.

If you read my infrastructure post today, Owen, you'll see that I condemn both dominant parties, Liberal and Conservative, at both levels for willfully betraying our future generations. Maybe there's less to choose from between them than we imagine.

I believe that our major parties are kissing cousins, Mound. So I understand why Lorne will not vote for Wynne. These days I find myself voting strategically. I cannot be a true believer in any party. So it comes down to which party will do the least harm. And, sometimes, it's not easy to make that kind of distinction.