Newsflash: Donald Trump Is A Liar 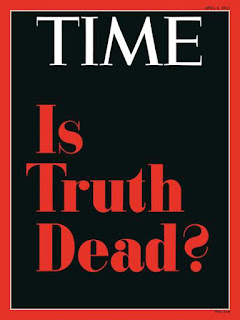 Donald Trump is a liar. And he brags about it. The Canadian Press reports that:

U.S. President Donald Trump boasted in a fundraising speech in Missouri on Wednesday that he made up information about trade in a meeting with Prime Minister Justin Trudeau, according to a recording of the comments obtained by The Washington Post.

The newspaper said in a report posted on its website that Trump had insisted to Trudeau that the United States runs a trade deficit with its neighbour to the north without knowing whether or not that was the case.

Trump said on the recording that after Trudeau told him the U.S. does not have a trade deficit with Canada, he replied, “Wrong, Justin, you do,” then added, “I didn’t even know … I had no idea.”


The only true statement in the speech was "I had no idea." But that doesn't matter. For Trump, the lie is more important than the truth:

Trump regularly bemoans a trade deficit with Canada and complained about it in late February by saying: “We lose a lot with Canada. People don’t know it. Canada’s very smooth. They have you believe that it’s wonderful. And it is, for them. Not wonderful for us.”


This even though a document he himself signed says exactly the opposite:

A different story is told in the recently released 2018 White House “Economic Report of the President” — an annual document prepared by Trump’s own team which bears his signature and contradicts a number of trade statements and policies already articulated by him.

One example involves the supposed trade deficit with Canada. Trump keeps insisting it exists, but the document he signed states Canada is among the few countries in the world with whom the U.S. runs a surplus.

The document states: “The United States ran a trade surplus of $2.6 billion with Canada on a balance-of-payments basis.”


As a former deputy mayor from New York City said long ago, "I wouldn't believe Donald Trump if his tongue were notarized."

Image: Time Magazine
Posted by Owen Gray at 9:47 am

Email ThisBlogThis!Share to TwitterShare to FacebookShare to Pinterest
Labels: Trump And Truth

Or as a friend of his said, "if you asked him for the time, he'd lie just for the practice."

.. aside from a multitude of similars here in Canada
we have our own little bo peep poster boy..
ah th Jason Kenney
the sky is falling.. and shouting 'wolf - wolf' from the western tar sands

Yes, he's a tiny tinny version of del Trumpo
and then there's Scheer, shouting n snouting daily n bravely
there on the banks of the Great Potempkin River
waving gaily.. .. and 'friend, can you spare some change'

These pricks n dicks are shapechangers, skinwalkers
perfect adepts at becoming millionaires
with gold plated pensions.. Its a sickness
aided and abetted by mainstream media sellouts

Paul Godfrey is the cutting chisel edge
Do we really expect 'journalism' from main media
when a complicit partisan sellout dick like this can just fire them?

These are grim times.. very grim
but rays of sunlight keep sprouting and shining
from the astonishing & resilient seedbed of Indy reportage
Its the only aspect that gives me hope

I am encouraged by some big papers like The Washington Post and The New York Times, sal. They're doing good journalism -- like they did during Watergate and the Pentagon Papers days.

I read a fascinating article about the "national security" justification Trump has used to justify his steel and aluminium tariffs.

“We’ve gone rogue,” says one congressional aide who works on trade issues. “This gun’s been lying on the table since Act One. No one’s picked it up for a very good reason. Because it sets off a whole chain of things that you can’t control afterwards.”

It's the old sauce for the goose/sauce for the gander problem. It's been a taboo but, once invoked with no genuine and compelling national security foundation, everyone is free to use it.

Not only facts, Mound, but any kind of rationale has been tossed overboard. Trump navigates the world with his gut -- which is considerable. But, like the man himself, it is overbearing and utterly unreliable.