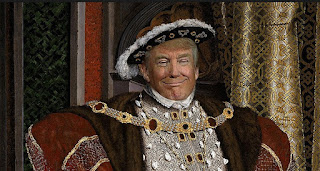 Robert Reich is a little guy who speaks with a big voice. He wrote two days ago that Donald Trump has become a mad king:

Before, he was constrained by a few “adults” – Rex Tillerson, Gary Cohn, H.R. McMaster, and John Kelly – whom he appointed because he thought they had some expertise he lacked.

Now he’s either fired or is in the process of removing the adults. He’s replacing them with a Star Wars cantina of toadies and sycophants who will reflect back at him his own glorious view of himself, and help sell it on TV.


He's more than a narcissist. He's also a megalomaniac:

The man who once said he could shoot someone dead on Fifth Avenue and still be elected president now openly boasts of lying to the Canadian Prime Minister, deciding on his own to negotiate mano a mano with North Korea’s Kim Jong Un, unilaterally slapping tariffs on imported steel and aluminum, and demanding the death penalty for drug dealers.

For weeks, Trump has been pulling big policy pronouncements out of his derriere and then leaving it up to the White House to improvise explanations and implementation plans.


For the moment, Congress and the world seem to be ignoring him:

The Republican tax bill bore almost no resemblance to anything Trump had pushed for. Trump’s big infrastructure plan was dead on arrival in Congress. His surprise spending deal with “Chuck and Nancy” went nowhere. His momentary embrace of gun control measures in the wake of a Florida school shooting quickly evaporated.


But Trump Unbound is far from benign:

Trump could become so enraged at anyone who seriously takes him on that he lashes out, with terrible consequences.

Furious that special counsel Robert Mueller has expanded his investigation, an unbridled Trump could fire him – precipitating a constitutional crisis and in effect a civil war between Trump supporters and the rest of America.


As I recall, the American Revolution was all about getting rid of a Mad King.

There clearly is a reason that Trump admires 'strongmen' like the Philippines' Duerte, Owen. He books no opposition and 'executes' drug dealers, two components of the Toddler-in-Chief's 'Utopian' dream.

I read that Trump was advised not to congratulate Putin on his election "victory." When you're king, you do what you want to do, Lorne.

.. del Trumpho is like a scamp (I use the term lightly)
who has an Admirals outfit thrust upon him
its like he won the Masters and US Open tennis
So he's been below decks, off a thundering lee shore
doing the Stormy galley aide..

He knows dick.. geography, history, legitimacy
those sail far over his head
His scene is fraudulent real estate deals
and ripping ordinary hard working Americans off
and for some reason, that got him elected

It's becoming clearer that Trump's triumph was a fluke, sal -- but it was a calculated fluke. He is operating on the assumption that the fluke made him invincible. There's no fool like a Big Fool.

Trump is a complete failure as a human species, Owen. Anyone can afford a pair of store-bought boobs when you use someone else's cheque book!

He's been using someone else's cheque book for decades, Lulymay. What's amazing is that he's gotten away with it for so long.