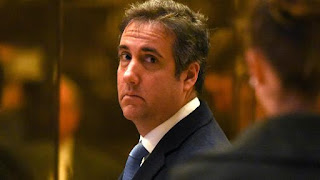 Last Sunday evening was a dark and Stormy night. Yesterday, Donald Trump's spokesman announced that Trump didn't believe a word Ms. Daniels said. But the real story isn't about the sex. It's about the cover up -- and how it was enforced by Trump's consigliari -- Micheal Cohen. Jonathan Chait writes that Cohen has a track record. And part of that record is about how he issues threats:

Daniels describes being approached by a man in a parking lot who threatened her: "a guy walked up on me and said to me, 'Leave Trump alone. Forget the story.' And then he leaned around and looked at my daughter and said, 'That’s a beautiful little girl. It’d be a shame if something happened to her mom.'”


It all sounds like something out of a Martin Scorsese movie. But that scenario fits Cohen:

Cohen is a Trump cultist, whose legal skills, such as they are, compose a small portion of his value to the Trump organization. His true value is as a goon. “If somebody does something Mr. Trump doesn’t like, I do everything in my power to resolve it to Mr. Trump’s benefit,” Cohen said in 2011. “If you do something wrong, I’m going to come at you, grab you by the neck and I’m not going to let you go until I’m finished.” In 2015, he told a reporter, “I’m warning you, tread very fucking lightly, because what I’m going to do to you is going to be fucking disgusting. You understand me?”


Trump has run the presidency the way he ran his family business -- like a New York mobster. And Cohen has been by his side ever since Trump lost the services of Roy Cohn:

Intimidating and threatening people who get in Trump’s way seems to be a recurring theme in his business interactions. There are many documented instances of this behavior. One victim of Trump’s shady financial maneuverings in Atlantic City received a phone call and was told, “My name is Carmine. I don’t know why you’re fucking with Mr. Trump but if you keep fucking with Mr. Trump, we know where you live and we’re going to your house for your wife and kids.”


Trump is increasingly frightened. He knows that Robert Mueller is the guy who sent John Gotti to jail. He knows that he can't intimidate Mueller. But he can fire him. However, one wonders if Trump understands the firestorm that would bring on.

What firestorm? There would only be one if the GOP-controlled Congress were interested in acting as a check on the president's power. That ended last year on January 20.

Trump's problem is that he can't fire Mueller. Currently, only Rosenstein can fire Mueller and only if he has just cause to do so. It's this inability to stop the Mueller probe that causes Trump's friction with Sessions, who he blames for recusing himself. Bottom line, Mueller isn't going away.

Unless Trump fires Sessions and puts someone in his place who will do the dirty deed, Cap. Nixon had to go down the list until he found Robert Bork. But he found him. And you can bet that there's someone waiting in the wings who will do the job.

I don't doubt that Trump could find a replacement for Sessions, Owen. Pruitt is rumoured to be the front-runner.

But Trump could have cut Sessions loose long ago and saved himself a lot of whining on Twitter. But he didn't. That tells me that Trump needs Sessions and can't afford to have him outside the tent pissing in. He needs Sessions to say, "I fired Comey on the basis of Rosenstein's memo, not the president's wishes." Without that, Trump's chances of beating an obstruction of justice charge go way down.

.. John Brennan "venality, moral turpitude, and political corruption''
kind of summed up Team Trumph perfectly
and spelled out where he was headed
the dustbin of American history

I'm not quite sure of the best analogy
or metaphor for Trump.. but when in doubt
I often go nautical & for good reason

Any skipper worth his salt feared
- a loose cannon which would smash around the gundeck
- a runaway ships anchor headed to the depths
- being pinned against a lee shore, incoming tide

There's more of course, but el Trumpho
seems to answer those three admirably
and far from being a skipper worth his salt
he's a born loser, unable to navigate
running out his herd of lawyers.. as if that's seamanship

An inteeresting point, Cap. But there was that interview with NBC where he admitted that Comey's firing was about Russia. I honestly don't know how all of this will play out. But it's my sense that Trump keeps digging the hole deeper. And that's why he's having trouble finding lawyers who'll represent him.

The dustbin is where he should wind up, sal. But it's going to take some Republicans to put him there.

.. I question that Owen
I think Trumpho himself will git himself
to the gitten place (from All The Pretty Horses)
and get his fat ass shot off
I don't think they hang folks
in A Murk Ee Ow of the 'free n brave' no more
but that fat slug working it hard

I think eventually Trump will find himself in the dustbin, sal. But it may take an election to send a good number of the Republicans to the dustbin to do it. I question whether they -- as a species -- will ever grow backbones.


When Trump tried to get diGenova it was because he liked what he heard the guy say on FOX News about an FBI/DoJ conspiracy to undermine the president. diGenova and his better half were set to join Team Trump but were curiously "conflicted out." My guess is that diGenova realized Trump wanted him to argue his nutty conspiracy theories in court. He was ready and willing to spew that nonsense on FOX but would not permanently ruin his legal reputation by trying that garbage on a judge.

We, Owen, are well and truly living in the Age of Crazy.

I agree, Mound. This is the President of the United States we are talking about. And this is crazy.