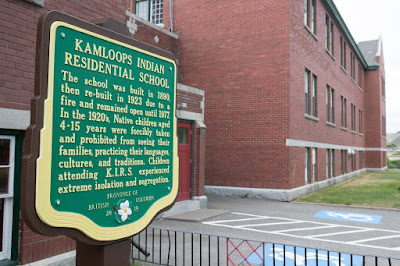 The discovery of the remains of native children in Kamloops has shocked the nation. Perhaps, Susan Delacourt writes, things will change:

Three days after the horrifying discovery of children’s remains outside a former residential school in Kamloops, B.C., the country feels on the verge of an important moment — one that could punch through complacency in a way that reports, inquiries and “calls for action” have not.

In Canada’s long conversation over Indigenous truth and reconciliation, the discovery of these children’s bodies inscribes a brutal, indelible entry in the “truth” part of the ledger.

We have been forced to confront what has been truly ugly in our history:

In Ottawa, for one unofficial memorial day at least, it was being treated as such on Monday, marked best perhaps by the tearful public breakdown of NDP Leader Jagmeet Singh.

Silent, struggling for words for nearly one long minute, Singh was only able to say he would pursue “justice” for these children before ending his news conference. It was an affecting display of what Singh had arrived to say: that words are not going to fix this.

Prime Minister Justin Trudeau cast the Kamloops discovery as the painful, unavoidable truth for those who have been trying to avert their eyes from the history of residential schools.

Speaking to reporters on Monday, Trudeau at least twice directed his comments at this constituency, arguing that the grisly find makes it impossible any longer to be casually unaware of what happened at residential schools.

“This is a moment in time,” Trudeau said. “Non-Indigenous Canadians may not have understood the depth of the trauma for those families … These are the things that Canada is waking up to this weekend. It’s a difficult and hard awakening.”

It is, indeed, a hard awakening. Now we must confront a harder question: How are we going to fix this?

Fix? I don't think we can. The children are dead. There may be some measure of reparations that could be given to living relatives and survivors, but it won't fix the problem.

We could however ban religious institutions from ever getting government contracts again. The legacy of pain and suffering left by the residential schools, orphanages like Mount Cashel, as well as the Magdalene laundries in Ireland, is a horror we should forever seek to avoid. Finally,churches long ago lost any moral or practical claim to freedom from taxation and they should be taxed like any other business.

They have been no paragons of virtue, Cap.

The feds will yet again try to slough this off. Sure those priests and nuns (along with some other clerics) did a number on these kids but with the sanction of the Department of Indian Affairs and the federal governments of the day, both Conservative and Liberal, aided and abetted by the RCMP.

The Mounties admit their role in removing children from their parents and, later, "searching for and returning truants." These weren't truants, idlers skipping class. I was a truant. These kids were escaping their abusers, fleeing in search of safety, fleeing for their lives. The Mounties also insist, unconvincingly, they had no idea about the abuse and deaths of these kids. Bollocks.

In 1875, Bishop Vital Grandin, wrote: "We instil in them a pronounced distaste for the native life so that they will be humiliated when reminded of their origin. When they graduate from our institutions, the children have lost everything Native except their blood."

I'm not surprised that the prime minister is skillfully out to deflect the blame onto the church when the Liberals and Tories have a shared, 120-year responsibility for these atrocities. It was their duty to monitor these clerics and their job to ensure the safety and wellbeing of those children. They failed, Liberals and Tories, and theirs was the ultimate responsibility.

Exactly, Mound. This is as much the government's responsibility as the churches. Duncan Campell Scott is known to most of us as a poet. But, as Deputy Minister of Indian Affairs, he was one of the architects of the residential school system.

I totally agree with you Mound. The Roman Cathlic Church's still on going blindness ought to acknowledge their blatant roll in this 100% as well. Anyong

The Church's record of abuse grows more horrifying with each passing year, Anyong.

Hard to let sink in 215 unmarked graves of children, in Kamloops, how many more are out there. Every parent must think what if one of these precious young lives was my own child? This is all beyond horrifying, the response so far is mostly symbolic, many have called for a national day of mourning- perhaps we can forgo a few flags on Canada Day and have each Canadian reflect on this national disgrace. The system was set up as a breeding ground for abuse, from sadistic Nuns and Pedo Priests to corrupt, cruel administrators, the children didn't stand a chance. Even read a story where brave older children would shield the younger ones from being a priest's sexual toy. It's going to take a lot to fix this, but making every Canadian reflect, and care, is absolutely essential. BC Waterboy

We cannot let this sink into the National Unconscious, waterboy.

There are religions in which the priesthood holds to the proposition that a child born to one of their parishioners, or given over to their charge under any other circumstances, becomes a property of the religious organization. This attitude prepositions them on the borderline that separates propriety in the maintenance of discipline from abusive behaviour. Because whatever they do is done in service to their deity, they hold that laws legislated by civil authorities are subject to assessment and interpretation by the non-secular authorities of their individual cults. Ask a man who got his primary education at Jesuit School. The perverts go along for the personal gratification that this ride can provide for them, and other stakeholders are incentivized to look the other way when the need arises.

It begins as a concern over basic income units and in some cults, after all the carnage, it ends up right back where it started.

Has Peru had a Truth and Reconciliation Commission?

I don't know the answer to your question, John. Certainly, Peru could use one.

I have to ask: why now? I have heard these stories of disappeared children for decades and this technology is not new. I would like to hear some back story.

Also exactly what has been discovered? This technology detects disturbed earth, not bodies directly as far as I can tell. It is not some sort of X-ray machine. How can they be so exact about the number of bodies and even say one was a three-year-old. Dental development can give you the age of a child but for that you have to dig up the bones.

I agree that residential schools were a disaster and that both the Catholic church and various government levels were at fault. But a huge emotional wallow with minimal facts will not help. Lots of people love a weepy movie and hate thinking any deeper.

This is no time to wallow, ffd. We have to face the ugly facts head-on.