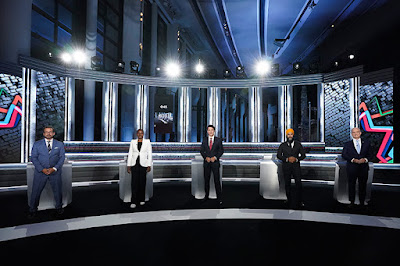 I tried to listen to the English language leaders debate. I turned it off after about forty-five minutes. It wasn't a debate. Michael Harris correctly characterizes it as "a third rate cage fight:"

The confrontation that everyone was waiting for, Trudeau versus O’Toole, never materialized in any coherent way. Given that one of those two men will be prime minister in just ten days, at least according to the current polling, it was a squandered opportunity of monumental proportions.

Had there been a substantive exchange between the two leaders, Trudeau would have been able to probe some of O’Toole’s signature platform policies that have now been costed by the Parliamentary Budget Officer. Those costings reveal that the Conservative party’s child care plan, for example, is nowhere near what the public was led to believe it was.

The way Erin O’Toole has been selling the Conservative plan, families would get a direct cash infusion through an improved child-care tax credit, roughly equivalent to the Liberal cash promise. The Liberal plan is to send $29.8 billion to the provinces over five years, with the goal of creating $10-a-day child care.

“It turns out that the Conservatives would replace the nearly $30-billion in child-care transfers to the provinces with just $2.6 billion in child tax credits to individuals. The Conservatives will honour the first year of deals signed by the Liberal government, delivering provinces a one-time transfer of $3.1 billion. But thereafter, the Tories would replace child-care transfers with a child-care tax-credit worth approximately 91 per cent less,” [The Globe and Mail's] the editorial board wrote.

And there were lots of other nasty personal exchanges:

[Annamie] Paul offered to “educate” the Bloc leader about the reality of racism. Blanchet replied that it was not an offer, but an insult. The Bloc leader already felt aggrieved after the moderator had earlier raised the issues of racism and xenophobia in a question about Quebec’s Bill 21.

Paul was also involved in another vitriolic exchange, after she claimed that Trudeau was not really a feminist, reminding the audience that he had driven two strong women, Jody Wilson-Raybould and Jane Philpott, out of his party over the SNC-Lavalin affair.

It was these clips that made the news broadcasts.

The moderator, Shachi Kurl, was on a power trip. She cut leaders off, not allowing them to give explanatory answers.

This was no debate. It was a Canadian version of The Jerry Springer Show.

Never before heard of Shachi Kurl. Now we know why. Fraser Institute Plant? What were 'they' thinking?

I think the three French debates had more impact in English Canada than the English debate!

And the horse-race reporting seems to be swinging away from O'Fool. Erin is no fake-American, Insurance adjuster wanna-be but it looks like his momentum was a media invention and a mirage that could not be sustained.

Funny isn't it Owen: the Cons are always ready to hand out beneficial tax BREAKS to their wealthy corporate friends, while they offer us mere voters an insignificant tax CREDIT and only when they are on the campaign b.s.trail.

The daily polling continues to change, PoV. It's really hard to predict who will get the most votes.

That's the one through-line in Conservative policy, Lulymay: tax breaks. The richer you are the more money you get.

My taste for political theatre has waned over the years, Owen. Therefore, I gave the debate a big miss.

Wow, you lasted 45 minutes?! I shut that gong show off after 10. I did catch the exchange where Paul accused Trudeau of not being a feminist. Trudeau handled it well by saying he wasn't taking cabinet management advice from her. But he could have been much more forceful by pointing out that Paul caused one of her own female MPs to join the Libs. That would have been a KO.

In any case, I don't think the English debate swayed any votes. The second French debate, OTOH, had much more potential. First, Trudeau killed O'Toole on daycare. O'Toole was banging on about how his plan would put money directly in the pockets of Canadians. Trudeau countered that the poorest Quebecers would get nothing from O'Toole's scheme. Second, Blanchet set up a classic Bloc-Con vote split by saying that a Con government would be better for Quebec. The Libs would be the big beneficiaries of QC vote-splitting and I'm sure Trudeau was glad to hear O'Toole get Blanchet's and Legault's endorsement.

We'll see how things turn out, but I've always felt that political debates are oversold.

3 French debates? I know of only 2, the TVO debate and the main French debate. Either way there should have been more English debates. Either way I hate Trudeau for breaking his promises on electional reform and pharmacare and others and for unleashing his blslackmailing extortist thugs on NDP and Green voters pressuring them to vote for the lies in the Liberal party. Karma is finally catching up to Trudeau.

As a university student, Lorne, I joined the debating club. There's a way to hold a debate. This did not deserve the name.

I watched the French debate, too, Cap. And, while it too was no debate, it was more substantive. The English debate, however, was a complete waste of time.

Trudeau has certainly stirred up a hornet's nest, Gyor. In the end, it seems to me that the outcome is still up in the air.

There's a certain beauty to being a single-issue voter, Owen. I just scan the candidates to see whose party has a credible plan to tackle the climate emergency. Easy, peasy. Not one, Ms. Paul included.

What's that flushing sound I hear?

When Elizabeth May led the party, you had someone to vote for, Mound. Unfortunately, you've been abandoned.

A bit late in the day but here goes.
I voted early this morning fully meaning to spoil my vote.
IN the short, 15 or so queue there were two individuals ranting quite loudly about climate change being phoney and Covid masks being useless.
I thought they were perfect PPC voters!
I had to change my mind and voted for the underperforming Paul Manly and the Greens.