The Shame Of It 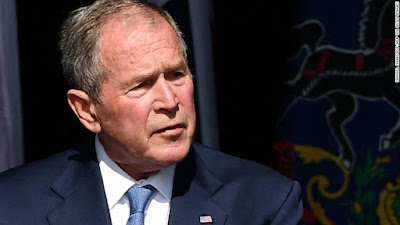 I was never a fan of George W. Bush. He made some terrible decisions that had far-reaching consequences. But, yesterday, in a speech in Shanksville, Pennsylvania, he spoke the unvarnished truth. Jennifer Rubin writes:

In perhaps the most important words spoken in his political career, Bush in his remarks at the crash site of United Airlines Flight 93 drew a straight line between the 9/11 terrorists and the 1/6 terrorists. “We have seen growing evidence that the dangers to our country can come not only across borders but from violence that gathers within,” he said. “There is little cultural overlap between violent extremists abroad and violent extremists at home. But in their disdain for pluralism, in their disregard for human life, in their determination to defile national symbols, they are children of the same foul spirit." He added, "It is our continuing duty to confront them.” Bush’s words were an indictment not only of the violent MAGA insurrectionists but also, implicitly, of his party that coddles them and the leader whom the 1/6 terrorists wanted to install by force.

These days, there are few Republicans willing to speak the truth and point out the obvious:

The Republican Party continues to minimize, deflect and ignore the 1/6 terrorist attack. Can one imagine in the wake of 9/11 Republican Senate Majority Leader Mitch McConnell asking senators as a "favor” not to investigate the 9/11 attacks? Consider the reaction had House Minority Leader Kevin McCarthy insisted we not bother investigating 9/11 because the other side was simply seeking to score political points. One can only imagine the reaction if, after a foreign attack premised on the big lie, Sens. Ted Cruz, Josh Hawley and the other Republicans proceeded to make challenges to the democratic process based on the same conspiracy theory advanced by foreign terrorists.

Rubin has it right:

Bush’s bluntness was a refreshing antidote to the usual blasé treatment of a radicalized Republican Party that embraces “children of the same foul spirit” as the 9/11 terrorists. The press, the ecosystem of donors, activists and operatives, and even, to an extent, the Democrats all treat Republicans as a normal political party within our democratic system, rather than as the enablers of a “foul spirit” and violent extremism. They shy away from labeling Republicans as “1/6 truthers” when the GOP’s effort to direct blame away from the actual terrorists is no better than claiming 9/11 was an inside job. (McCarthy and his cohorts insist it’s Pelosi who should be investigated.)

These days, George W. is a lonely Republican. And that's the shame of it.

Email ThisBlogThis!Share to TwitterShare to FacebookShare to Pinterest
Labels: Bush On Domestic Terrorists

Quite true, Cap. It's easier to get at those people who are closer to home.

I don't know but I think Osama got his comeuppance. And how many hundreds of thousands of Muslims, a good many of them completely innocent, did the US and its allies slaughter over the last 20 years? Death from above, baby! Is there a Hellfire in your future? Oh look...

Give us another decade, two at the outside, and we may become morbidly inured to this sort of carnage.

I fear we already have, Mound.

Yes, its already here. We in B.C. have had some seriously nasty demos in front of hospitals. There is now an article up in the National Post about two Ontario nurses who belong to an organization,, Canadian Frontline Nurses which is organizing more of these demonstrations across Canada, for Monday. These two women were also in D.C. on 6 Jan. at another rally.

It was a good thing Bush finally came out and said what he did. It was about time. It would appear Chris Christy is also changing his tune regarding Trump.

If the U.S.A. doesn't get some of their shit under control, it will come to Canada. Texas and their anti choice laws, watch it come to Canada if O'Toole has a majority. He won't be able to reign in some of his M.P.s and there we go again. In B.C. some ridings are closer than some had thought, RossK at Pacific Gazetteer has his opinion up. There are just too many "reform" types in Canada to think this "american" shit won't come up here, well its always been here, just not in the volume it is these days and what has driven it is the organization of the anti vaccers.

We have our own Trumpists, e.a.f. And, like their cousins south of the order, they're dumb but loud.