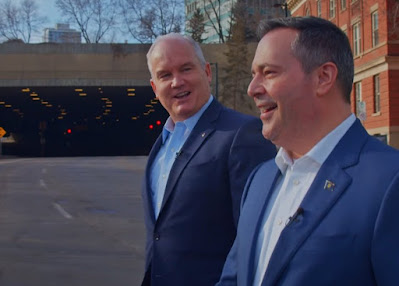 Erin O'Toole says he's going to reform Canadian healthcare. But, when you get into the weeds, O'Toole's plan sounds a lot like Kenney's policy. Gillian Steward writes:

Conservative leader Erin O’Toole’s comments about how a government led by him would improve public health care seem designed to evade the whole truth about what Canadians can expect when they need a family physician, surgery, long-term care or a visit to ER.

O’Toole has said he believes in both “innovation” by the private sector, what he calls “public-private synergies,” and universal access to public health care, meaning no one would have to pay out of their own pocket to get the care they need.

The Kenney approach has public money being funnelled into surgical clinics, diagnostic imaging, laboratories and testing facilities that are owned and operated by various private investors, who expect to earn a return on their investment.

So, yes, there will be universal access; a patient just has to show her health care card to get whatever service she needs. But where is all that public money actually going? How transparent is the contract awarding process and the contracts themselves? What oversight is government going to provide to make sure patients are receiving a high standard of care? And doesn’t expecting a profit mean higher costs than in the public system?

A prime example of this approach is the Alberta government’s arrangement with Telus, Canada’s second largest telecom company, to provide an app that Albertans can use for a virtual consultation with a physician. A virtual walk-in clinic, although the attending physicians might be in another province far from the patient’s network of community resources.

Telus is doing quite well:

Alberta’s health minister Tyler Shandro, breathlessly announced the partnership early in the pandemic as a way for homebound people to get in touch with a doctor. But it was soon discovered that the Telus docs were getting paid more per virtual visit than doctors in Alberta who were bypassing the Telus app and virtually consulting with their patients using whatever technology was available to them in their clinics.

The fees were adjusted after Alberta doctors loudly complained. But we never did find what kind of remuneration or benefit Telus gets from this arrangement. How much public money went to Telus for this service and shouldn’t that information be easily accessible?

Despite the pandemic, the Kenney government was quick to pass legislation that permits the health minister to enter into agreements with “corporations” and to establish alternative relationship plans with physicians who would bypass fee scales negotiated through the Alberta Medical Association.

This approach, Steward writes, is the point of the spear:

This is all in preparation for establishing small, privately owned hospitals focused on complicated surgeries, such as hip and knee replacements. Kenney claims it will be faster, cheaper, more efficient and will reduce wait times, although he doesn’t present any data to back that up.

In fact, it's been tried before:

That has already been tried in Calgary during the Klein era and it was a disaster. The health authority ended up paying 10 per cent more for surgeries it had contracted to the private facility than it paid in its own hospitals. When the place went into receivership the health authority had to pay the receivership fees to keep it going because it didn’t have enough operating capacity in its own hospitals.

There is a reason Alberta is leading the nation in new COVID cases.

Conservatives try to justify more spending in the private sector by claiming greater innovation. But if the private sector were truly innovative and cheaper, we would have seen it by now in dentistry, optometry and psychology, all not "contaminated" by public spending. Instead, private sector innovation focuses less on better health outcomes, and more on better financial outcomes for corporate managers and shareholders. And, frankly, there's not much innovation in using non-unionized labour and outsourcing to create a race to the bottom in working conditions. These are exactly the kind of conditions that cause burnout and quitting among nurses, and the high number of Covid deaths in private long-term care.

Improving healthcare outcomes is complicated, and I don't think any of the parties have shown a firm grasp of the issues in this election. With so much of healthcare administered by the provinces, there's only so much that can be achieved at the federal level. Universal pharmacare, as proposed by the Libs in 2015 and the NDP now, would however be good to see.

It's clear -- and has been clear for some time -- that public healthcare is cheaper than private healthcare, Cap. Conservatives keep arguing that private care is better than public care. Try telling that to the families who have lost loved ones in nursing homes.

Everyone should read and take heed of an article at "Balloon Juice" blog titled "Crisis Standard of Care". Don't think it can't happen here in Canada - one only has to look at Jason Kenny's idea of what public health care entails (including taking a run at both doctors and nurses).

Thanks for the tip, Lulymay. Kenney knows how to make doctors and nurses look elsewhere for employment.