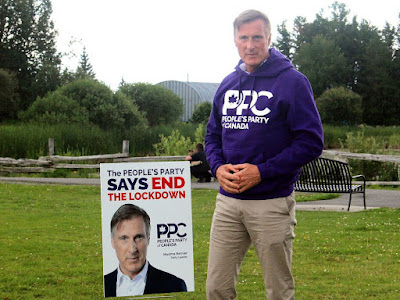 When Maxime Bernier lost the leadership of the Conservative Party by a smidgen, his supporters circulated a story that the leadership had been stolen from him. Stephen Maher writes:

On June 5, 2017, a week after Andrew Scheer upset Maxime Bernier to become leader of the Conservative Party of Canada, I had an off-the-record interview with a senior Bernier organizer who was challenging the results.

The Globe and Mail had just reported that 133,896 voters cast 141,362 ballots, which meant that there were 7,466 more ballots cast than people to cast them. The Bernier team believed that many people voted twice, once by mail and once at their local ballot location.

“It is so goddamn easy to double vote in this,” the organizer said. “In fact, if you are in some of these ridings, you could likely triple vote. You could mail your ballot in, go to your riding … and then go to the convention.”

To make matters worse, as soon as the ballots were counted, they were destroyed. The party said the results had been certified by an accounting firm, but they hadn’t.

“There were a lot more ballots in that box than there were supposed to be,” Max’s guy told me. “The party’s explanation is that there were thousands of innocent mistakes made by volunteers across the country. That’s sort of like saying we flipped the coin and it landed on its edge.”

“What one can derive from all the comment, public and private, from the party, is they have no interest in doing anything but saying, ‘Everything was great. F–k off,’ ” the strategist explained.

Here’s the theory: The Harperites weren’t going to let the man from the Beauce take over their party, fire all of the people who built it and take it in some unknown libertarian direction. Much better for Scheer, a known quantity, to win, since he would leave everyone in their jobs, and keep control of the fund-raising machine.

It is starting to look like [Bernier] will have his revenge on Monday, denying the Conservatives the votes they need to finally dispatch Justin Trudeau.

If the polls are right, the People’s Party will get a lot more votes than last time, mostly from people who voted for Scheer’s party in 2019, likely enough to allow the desperate Liberals to hang on.

You don’t need to read the polls, actually, to know what is happening. In the course of the last 10 days, as the LPC-CPC race got tighter, the Conservatives have been forced into the same kind of strategic-voting pitch that the Liberals always use at the end of a campaign. It started with a vaguely worded meme on a social-media surrogate account, and ends up with O’Toole making an explicit pitch to would-be PPC supporters, echoed by allied commentators.

There will be lots of strategic voting today. We'll know the final count in about four days.

"It is starting to look like [Bernier] will have his revenge on Monday, denying the Conservatives the votes they need to finally dispatch Justin Trudeau." It couldn't happen to a nicer bunch of people. I'm rooting for injuries.

There are going to be injuries, Cap. We'll have to wait to see if some of them will be fatal.

Bernier has a been a slow burning sore loser (not unlike the disgusting Trump south of the border) since the party rejected what was even too-crazy for them. His ideas would take us on a never ending covid pandemic (not that we're really doing much better, we're not- but at least the others can muster a get-vaccinated message). He is tiresome, dangerous to the politics of Canada and has created a base built on nonsense, violence and rejection of science and fact. Hopefully no more campaigns for the foreseeable future and we can go back to ignoring him, along with Erin O'Toole one can hope. BC Waterboy

What has bothered me about this campaign, waterboy, is the anger out there -- something Bernier thrives on.

Perhaps the real "progressive" Conservatives have had a good long look at how the Harper Reformers actually "govern" by another Harper boy in Alberta and have decided they don't like what they see has really happened to their old party. Especially since it still seems to be functioning quite well in the Maritimes.

Usually it is the right, eager for vote-splitting among progressives, who urge people to vote with their hearts. Let's hope they follow their own advice in this election, Owen.

"There will be lots of strategic voting today. "

Of course. And today's poll will confirm or correct all the others we've seen.

If the opinion polls are correct, it means LESS strategic voting, especially west of Ontario.
It's like folks are voting in a PR way in a fptp election. We've jumped the shark?

Do you think the 'don't split the vote' will work this time?
for which (or both) sides?

Flashback to 1983. Brian Mulroney is challenging Joe Clark for the Tory leadership. When the Quebec vote was held a bus with newly fledged Conservatives, guys from a homeless shelter, obviously drunk, appeared to vote for Lyin' Brian. "There's no whore like an old whore".

I'd like to think that there are still a lot of Progressive Conservatives around, Lulymay. Unfortunately, the party dumped that adjective from their logo.

I agree, Lorne. Seems to me they need to identify the cancer within.

If anything, PoV, this election confirms that voters want -- really want -- proportional representation.

Unfortunately the voters don't know they really want proportional representation and refuse to depart from familiarity and ignorance.

Dalton McGinty stuck his neck out in 2007 by holding a PR referendum along with the provincial election of that year. Voters could have indicated interest but very few people had even bothered to find out what PR was. There were ten days of advance poll because of this referendum which was added to the regular voting procedure. I worked at one of these polling stations; the turnout was sluggish.

The result of this referendum was a resounding duh and Dalton McGinty was left looking like an idiot though I think he deserved full credit for trying. I don't think any of his successors are eager to repeat the experiment.

PR's history is not encouraging, ffd. But the discontent in the country is at least partially due to voters trying to make their votes count.

.. We vote & live & are governed in the bewilderness
of Whipped MP’s in some truly corrupt Parties
We vote for candidates, hoping they will win or.. we ‘Vote the Party’
and ‘any which way but loose’ we still get abandoned (screwed over)

As you can see from the comments in this space, sal, there are many who agree with you.

Isn’t that what most Americans did with Trump..ignored him? People are not saying what is really going on in this country which is another Tump like issue With Max. Does anyone think Canada could not become another 13 new states of the US? Leave it to Alberta especially the Medicine Hat area where many people want to become a part of the US . If they think the US is so wonderful, why don’t they just move there? Anyong

My impression is that lots of Albertans like the way the Americans do business, Anyong.