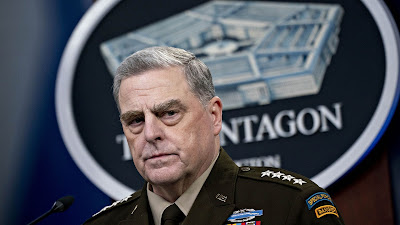 General Mark Milley is being praised these days for his efforts to restrain a clearly deranged president. But, Max Boot writes, there is no guarantee that the Chairman of the Joint Chiefs of Staff will be as wise as Milley:

There is, alas, no shortage of right-wing extremists in the military. See, for example, a supposed resignation letter from an Army lieutenant colonel named Paul Douglas Hague that has ricocheted around the Internet in recent days. The Defense Department already mandates 17 different vaccinations for various personnel. But Hague was said to have resigned to avoid taking a vaccine for covid-19, ludicrously claiming that it signified a “Marxist takeover of the military and the United States government.”

There is absolutely nothing stopping Trump or some other future Republican president from appointing someone with far-right views such as Hague’s as chairman of the Joint Chiefs. In other words, we cannot count on future generals resisting a power-mad, would-be authoritarian in the Oval Office as Milley did.

The potential for another Trump to try what the present Trump did is always there. Legislation is required to reign in a president's unfettered ability to use nuclear weapons:

Sen. Edward J. Markey (D-Mass.) and Rep. Ted Lieu (D-Calif.) have introduced legislation to prohibit the president from a first use of nuclear weapons unless Congress has declared war. That would still allow a president to respond to a nuclear attack but would take off the table the kind of “wag the dog” scenario that so worried Milley. Other experts have proposed going even further by mandating that any presidential nuclear order would have to be ratified by the next two people in the line of presidential succession, normally the vice president and House speaker.

It is imperative for Congress to pass some such limitations on the president’s nuclear-use authority before another unhinged president takes office. We suffered badly enough under Trump; 400,000 Americans died of covid-19 while he was in office and insurrectionists invaded the U.S. Capitol. Yet it could have been far worse — and could still be in the future if we don’t act today.

Will it happen? We'll see.

Email ThisBlogThis!Share to TwitterShare to FacebookShare to Pinterest
Labels: Presidents And Nuclear Weapons

"As it happens, however, there’s a significant flaw in such reasoning. In fact, consider this a guarantee: by 2049, the Chinese military (or what’s left of it) will be so busy coping with a burning, flooding, churning world of climate change — threatening the country’s very survival — that it will possess scant capacity, no less the will, to launch a war with the United States or any of its allies."

But the people displaced by climate change -- climate refugees -- could cause significant global disruption, PoV.

The greater question is what baseline qualification should a president have to become Commander in Chief? As Nixon said, he had the power to slaughter millions of people in 25 minutes. He came out with that when he was in the throes of depression and inebriation as impeachment loomed.

His defense secretary, Schelsinger, and secretary of state, Kissinger, directed the chiefs of staff not to accept any order from Nixon without clearing it with them first.

The Washington Post reports that the Milley story is not what it seems. Milley was acting in consultation with his political superior, Trump's defense secretary, Esper. That may explain why Trump turned on Esper toward the end of his term.

Trump's hand picked CIA director, Gina Haspel, said the president was maniacal after losing, like a "6 year old throwing a tantrum." She told Woodward that she and several other cabinet-level aides feared Trump might stage a rightwing, constitutional coup.

Just to carry the nuclear football requires careful screening. You have to be of sound mind. The shrinks must give you a clear bill of health. Then along comes a deranged president. Yet he's given the launch codes? That's Armageddon-grade madness.

But that just reinforces the irony of "best case scenario".
Fasten our seatbelts!

One way or another, PoV, it's going to be a rough ride.

It truly is madness, Mound. It's like giving a six-year-old a driver's license.