Quebec Does It Again 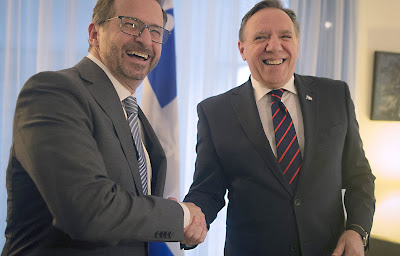 Justin Trudeau should have been feeling pretty good on the morning after the night before, about his strong performance in the second French leaders’ debate, and confident about his prospects for the upcoming evening’s one in English.

And then François Legault went and spoiled his morning by tacitly endorsing Conservative Leader Erin O’Toole.

Legault went out of his way to warn against voting for the Liberals or the NDP, or the Greens for that matter.

"I think it’s dangerous to support those three parties,” he declared, warning voters to be wary of them as representing the centralizing forces of orthodox federalism.

For example, he said: “They think they are better than Quebec at managing the health care system.”

And writ large, he added, “the Quebec nation wants more autonomy, not less.”

“It will be easier,” he said, “for Quebec to negotiate more powers with Mr. O’Toole than Mr. Trudeau.”

Legault's partner in this election is Yves-Francois Blanchet -- a little man with a big grudge. Blanchet says that he and his party will not take part in a coalition government  -- which begs the question, "What are you doing in Ottawa?" The group he leads is a bloc -- a fragment, not a national party.

If M. Legault and M. Blanchet hold sway in la belle province, Justin Trudeau and his party will occupy the opposition benches.

I wouldn't worry too much about what Blanchet and Legault say. They're preaching to their own supporters who intend to vote BQ anyway.

However, as Trudeau pointed out in the second French language debate, they're not the only ones representing the interests of Quebec. Trudeau is himself a proud Quebecer and represents a Quebec riding. As both Mulroney and Layton proved, Quebecers will turn out at the polls to support a native son. And the majority prefer a future in Canada, not outside it. Besides, even Con-friendly reporters like Andrew Coyne and Don Martin admit that O'Toole stunk up the house in the two French debates. He's going nowhere in QC, despite what Blanchet and Legault have to say.

I missed the whole performance and not a pang of guilt. Firstly, imagine a row of politicians looking to get elected and being allowed throughout the whole process being allowed to snipe at each other over slights and shortcomings both real and imaginary, and never being required to sign their names to the substantive policy initiatives that might take us through the storms on the horizon. It's a cross between Catch-22 and Alice in Wonderland. Then think about the whipped parties and the strict adherence to party planks as decided by the heavyweight donors and, well, it isn't a pretty picture. I will still vote, but not much in the hope that there is real guidance inherent in that vote, or that any of the party leaders will show enough leadership to educate voters as to what is really facing us and how we might navigate these challenges.

I hope you're right, Cap.

Your first quote should read Quebec sait fair. Quebec knows how (to do things).

I suspect that this time around voters will cast their ballots and hold their noses, Danneau.

I think Cap may have it right. Legault is spending political capital - credibility - shilling for O'fool. Perhaps it is code for vote Bloc: Bloc does well, say bye to Jr?
Quebec is a mysterious place politically, always surprising us ...

While they can be more volatile they seem to end up with a lot of the same bad gov'ts as in the other provinces and contribute to the federal mess.

Will the folks outside Quebec notice? The Nat. Post ran it as a big headline thinking it will help, but it could hurt O'fool - who wants a 'headwaiter to the province of Quebec" as a PM?
:-)

I have no doubt that Justin's father would label O'Toole a headwaiter to the premiers, PoV.

And today's Chantal Hebert headline (article behind paywall) seems to agree with my take:
"An endorsement from Quebec’s premier could hurt Erin O’Toole as much as it helps him"

Your sentence is grammatically correct, Merrill. But "Quebec se faire" is meant to be a conscious echo of "savoir faire." There are connotative meanings at play here -- just as "mon pays" means more to Quebecers than just "my country."