There They Go Again 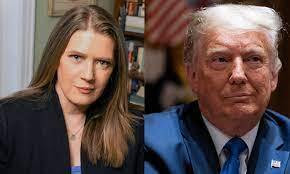 America's most dysfunctional family is at it again. The Washington Post reports that:

Former president Donald Trump has sued his niece, Mary L. Trump, and the New York Times over the publication of a 2018 article detailing allegations that he “participated in dubious tax schemes … including instances of outright fraud” that allowed him to receive over $413 million from his father, Fred Trump Sr., while significantly reducing taxes.

The suit, filed in a Dutchess County, N.Y., court on Tuesday, alleges that Mary Trump, the New York Times and at least three of its reporters “engaged in an insidious plot to obtain confidential and highly-sensitive records” about the former president’s finances. According to the lawsuit, Donald Trump suffered at least $100 million in damages as a result of the alleged actions.

Donald Trump’s suit alleges that the New York Times influenced Mary Trump to help them acquire confidential documents despite a settlement agreement that she had signed after a legal challenge to Fred Trump Sr.’s will. In her 2020 book “Too Much and Never Enough,” Mary Trump detailed how she helped the reporters obtain Donald Trump’s financial records.

And so Trump's  quest for personal vindication via the courts continues:

News of Donald Trump’s lawsuit was first reported by the Daily Beast. Mary Trump told the news website that the legal action was motivated by “desperation. … The walls are closing in and he is throwing anything against the wall that will stick. As is always the case with Donald, he’ll try and change the subject.”

A spokeswoman for the Times said that the paper’s coverage of Donald Trump’s taxes “helped inform citizens through meticulous reporting on a subject of overriding public interest. This lawsuit is an attempt to silence independent news organizations, and we plan to vigorously defend against it.”

We all have our troubles. But at least we can give thanks to the powers behind the universe that we weren't born Trumps.

Email ThisBlogThis!Share to TwitterShare to FacebookShare to Pinterest
Labels: Donald And Mary Trump

Notice how Trump isn't denying that he “participated in dubious tax schemes … including instances of outright fraud.” Instead, Trump alleges a nefarious plot to get his confidential tax records - records, I might add, that he promised to make public. This will not end well for the dotard.

His record as a businessman makes it clear, Cap, that Trump is self-destructive. The problem is that he brings millions of people down with him.

I am boycotting any and all tRump stuff unless it is indictment of the man himself.

Who knows if that will happen, PoV? It should have happened long ago.

Its amusing. this is better than a t.v. series. Love the line about trump being damaged to the tune of $100M. the guy has an over inflated sense of his worth,

This lawsuit may be the undoing of trump. sure is going to be interesting if it goes to trail and he has to explain about the $100M value he puts on himself.

You can bet that Mary Trump's lawyer will do all kinds of things with that 1 million dollar figure, e.a.f.

Notice how Trump isn't denying that he “participated in dubious tax schemes … including instances of outright fraud.”

Republicans and Democrats alike will not Trump fail for to do so will put too many other tax dodgers at risk.
The same goes in the rest of the western world.

Follow the golden rule; he who has the gold , rules.

Money is still the mother's milk of politics, TB.