The Worst In Us 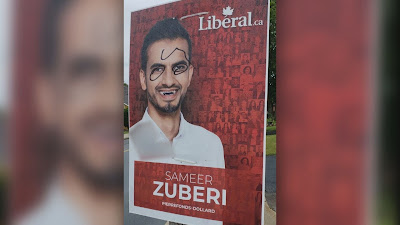 The West Island is that part of Montreal that hugs the shores of Lac St. Louis, from Dorval to Ste. Anne de Bellevue. It used to be an Anglophone ghetto -- a glaring example of what we used to call The Two Solitudes in Quebec. In the last forty years, its population has changed. Lots of Francophones now live there as well as lots of immigrants -- particularly people of colour.

It's where I grew up. And it has its dark side. Global News reports that:

A West Island Liberal candidate said Wednesday that he will continue to campaign, despite being the target of a “public display of racism.”

Sameer Zuberi made the comment on Twitter Wednesday after at least three of his election posters were defaced with racist slurs, referring to people of Pakistani and Indian origins.

One of the signs even included a death threat.

Zuberi, whose father was born in Pakistan, is running for re-election in the federal riding of Pierrefonds-Dollard.

This election has exposed the anger that has been just below the surface during the pandemic. COVID has brought out the best in us. It has also brought out the worst in us.

The deplorable defacing of election signs is nothing new for minority and women candidates. There has always been a segment of society that sees this as "fun."

Fortunately, Mr. Zuberi is running for re-election in a safe Liberal riding that he won last time with over 56% of the vote. I'm confident he'll soon be back to being a nobody fifty yards off Parliament Hill.

He'll keep his seat, Cap. But I'm not sure he'll be on the government side of the House.

On the one hand we could say that Canadian elections were often physically violent in the 19th Century. They gradually became more respectable during the 20th Century. At the same time the candidates were primarily white, male lawyers and businessmen with the occasional academic, trade unionist and the occasional woman. (The women, as far as I can tell, besides being white, tended to come from solidly upper-middle class backgrounds. People of colour were so rare that their appearance was cause for commentary. Racism obviously existed but the exclusion of non-white participants made racist insults and threats basically non-existent.

But on the other hand, I do believe that there has been a rise in the intensity of hatred and anger against rival political parties and movements as well as an increase in the amount of "loud and proud" racism we observe. The main fault of that lies with right-wing media with the USA's FOX News sitting on top of a mountain of radio-hosts, writers, "think-tanks," and internet yahoos.

Secondary blame must lie with the neo-liberal austerity economics that simultaneously make everyone's lives more precarious while also implanting in people's minds that other people are rivals/competitors and that we're all on our own in this brave, new, free-market world.

Add to that the repeated claim that elections are stolen, thwap, and you have a witches brew of malevolence.

The women, as far as I can tell, besides being white, tended to come from solidly upper-middle class backgrounds.

Probably true of both men and women. Labourers do not, even now, have the time and resources to fight an election. Does anyone know if MPs even got paid in the 19th C? Sir John A maintained a legal practice in Kingston even as PM though I don't know if it was for the money.

IIRC, in the UK, parliamentarians did not get paid until ~1911. Labour MPs were supported by the trade unions.

These days, jrk, some candidates appear to be quite rich before they decide to enter politics.