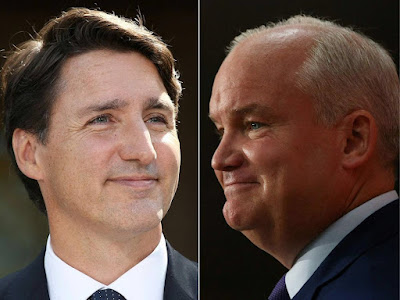 This election, Susan Delacourt writes, is all about change: How much do you want? More or less?

It’s one of the most fundamental questions in any election campaign, but the pandemic has made it incredibly complicated in 2021 — especially for Liberal Leader Justin Trudeau and Conservative Leader Erin O’Toole.

But this is 2021 and the country finds itself in the middle of an election campaign during the time of COVID-19.

So Trudeau has spent a lot of time talking about how he needs a mandate for big, post-pandemic change. “Really big changes, coming in the next weeks and months,” the Liberal leader reiterated on Monday.

The dynamic of this election is the opposite of the usual dynamic. Normally, O'Toole would be the agent of change. Trudeau would represent the old guard. But "security" is everywhere in the Tory platform:

Hence the Conservatives’ surely not accidental emphasis on security all through their platform — called “Secure the Future” — and their presentation of O’Toole as a stable dad from the suburbs who will ratchet down drama in Liberal-led Ottawa.

In the final days of the campaign, O'Toole is engaged in ad hominem attacks on Trudeau:

“I’m a new leader,” said O’Toole, who likes to mention that these days. “Canadians deserve better than a leader concerned only about his own power. But this is a pattern, day after day, month after month, year after year. The only thing he and the Liberal party prioritize is their own survival, more of the same spending and debt, $424 million per day, with more of the same on its way, more of the same corruption.”

We'll know in a week.

Looks like O'Toole has abandoned his compassionate conservative shtick and is back to personal attacks. That's a sign that he's given up on persuading swing voters and is trying to shore up support bleeding away to the PPC on the right. With a week to go, it's looking like another Lib minority.

I have avoided making predictions, Cap. But it seems that's where we're headed.

O'Toole's Carp Crap looked and sounded dangerously Trumpy. He must be seriously frightened of both Mad Max and his own party. The coming leadership review will not be kind to him.

In think that this is a terrible campaign for the Libs. We are still waiting for a definitive answer as to why we are having an election. All Trudeau has to say is that "the previous parliament wasn't working and it we all those nasty PCs who were doing it."

Put it back on O'Toole to defend Skippy and the rest of the obstructionists. Nope the Lib whizkids are not up to this one.

With the help of the feckless media, the Cons have been at least partly successful in promoting their "new" leader. It helps that no American citizenship, or faked insurance-adjuster-status or questionable academic issues have surfaced. This feint to the middle is supposed to grab enough swing voters outside Alberta but (here's hoping) it will push enough votes to the PPC wreck his party and maybe even get a serious pro-rep discussion going.

In 1965, Pearson called an early election - to get a majority - and it misfired. (A loss would have been a tragic backfire.) Pearson got another minority.
With the NDP help, the 63-68 Lib minority gov'ts gave Canada much of the legislation that shapes modern Canada: Old age security and universal health care, to name just two.

If we get a similar outcome to 1965, a misfire rather than a backfire, then Jr had better swallow his pride, thank his lucky stars - and get back to work.

It's pretty clear that O'Toole and his party disagree on a lot of things, rumley. Somewhere down the line, this dysfunctional family is going to have a blowout.

I agree, PoV. If Justin gets a minority government, he'll be very lucky.

That's why they'll be lucky if they come away with a minority government, Ben.

I watched another OToole presser today. The 5th estate is getting restless because he won't give a straight answer to any of their question. Then it struck me: he doesn't have a stratagy or a plan so he can't have answers. He has to fall back on meaningless ' I don't like Justin " playground drivel.

That's essentially the Conservative campaign, rumley. They have been running from the same playbook ever since Justin became the leader of the Liberal Party.

One way or the other, TB.

It could happen. We should be so lucky.
If the result is like 2019 then I don't see it happening.

What makes the difference this time around is policy, PoV. There is little policy-wise that Trudeau and O'Toole can agree on.