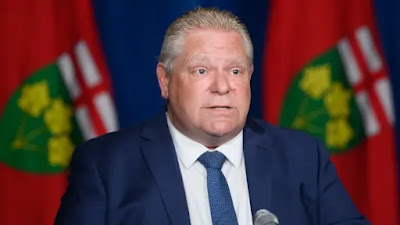 Doug Ford was going to stay out of this election. But he's now in it in a big way. Susan Delacourt writes:

So much for the election truce between Doug Ford and Justin Trudeau.

The detente appears to have crumbled over the issue of vaccinations — proof of vaccination, in particular — an off-and-on wedge issue of this pandemic election. It has given a whole new meaning to “shots exchanged,” which wouldn’t make a bad title for anyone writing a book about this weird campaign in the age of COVID-19.

Yesterday, Doug introduced a policy of vaccine passports -- and blamed Trudeau for the delay:

Ford is blaming Trudeau for his own about-face on vaccine certificates, saying that he was only introducing one in Ontario this fall because Trudeau dropped the ball and called an “unnecessary election” instead.

Team Trudeau fired back within hours, calling it a “shocking” revision of history around the first ministers’ table.

“Today’s press conference from Premier Ford was shocking and a disappointment,” said Bill Blair, who is campaigning for re-election in Scarborough Southwest while also retaining caretaker responsibility for public safety and border matters.

“The premier has been late to announce vaccine passports in Ontario. His comment today that he asked the federal government to bring in a national vaccine passport is untrue. “

Ford appears to have particularly irked the federal Liberals with his assertion that Trudeau’s government had balked at provincial demands for a pan-Canadian proof-of-vaccination system.

"All the provinces, all the premiers, have requested a national vaccine passport,” Ford said.

O'Toole's numbers are surging and Doug is hopping on the bandwagon.

If we get a CON government, it is because of
the infantile 'both sides media' nonsense,
the willfully ignorant electorate and
the very disappointing son of Pierre Elliot Trudeau.

Ford is bullshitting that all premiers requested a national passport. I don't believe that Kenney and Moe would ever agree to such a thing. That would be totally out of keeping with their slavish devotion to the Covid policies of DeSantis and Abbott.

We get the government we deserve, PoV.