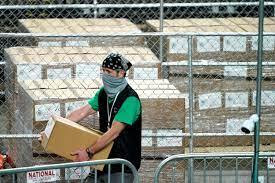 Newsflash! The Cyber Ninjas -- you remember, those bozos from Florida who conducted an audit in Arizona to discover who won the American presidential election in Maricopa County -- have completed their work. And -- wait for it -- they have concluded that Joe Biden won the election. Phil Helsel reports that:

Maricopa County, Arizona, said Thursday that a draft report from a company in a contentious, partisan review of November's election has confirmed the winners.

The "draft report from Cyber Ninjas confirms the county's canvass of the 2020 General Election was accurate and the candidates certified as the winners did, in fact, win," Maricopa County tweeted Thursday night.

The review grew out of Arizona Republican lawmakers' efforts to toss out President Joe Biden's victory in November, and the state and the county have been targeted by those who falsely believe the presidential election was stolen from Donald Trump.

Maricopa County did not release the draft.

NBC affiliate KPNX of Phoenix said that it obtained a copy of the report and that the review widens Biden's victory margin by 360 votes.

In the United States, it's as clear as rain: A sucker is born every minute.

Email ThisBlogThis!Share to TwitterShare to FacebookShare to Pinterest
Labels: The Cyber Ninja Audit

It was money spent to raise money for Trump, Cap.

It was money spent to raise money for Trump, Cap.

What a cynical statement. :)

Cynical yes, jrk. But when it comes to Trump, cynical describes things quite nicely.