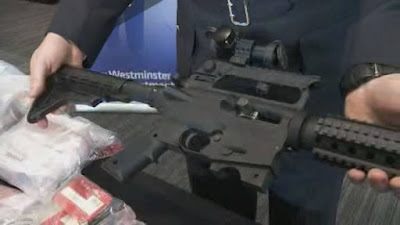 The Conservatives were going to lift the Liberal ban on assault rifles. But now they've changed their minds. John Ibbitson writes:

Faced with the possibility of losing an election that they hoped would deliver a comfortable majority government, the Liberals have been lashing out at a Conservative commitment to lift a 2020 order-in-council that banned certain kinds of semi-automatic weapons.

In Markham, Ont., on Sunday, Mr. Trudeau declared: “Mr. O’Toole has made a secret deal with the gun lobby to reverse that ban on these assault weapons, military-style assault weapons,” which had been used in a number of mass shootings in Canada.

“Those guns have no place in Canada, but that’s the choice Erin O’Toole is offering, to return to a time when these guns were legal in our country,” Mr. Trudeau said. “That’s not what Canadians want.”

And O'Toole began to think that Mr. Trudeau was right. He decided it was better to keep the ban:

At a media availability at Vancouver’s Canada Place, Mr. O’Toole announced that, if elected, his government would keep the order-in-council in place during the public review of legislation and regulations.

“Our intention is to take the politics out of this,” he said.

Clearly, O'Toole's move is a stall -- and it's all about politics.

Funny how Cons are all about supporting the cops, except when it comes to listening to them on gun control. Trudeau is absolutely right when he says, "There is no good reason for anyone in this country to own a military-style assault rifle." Police forces agree with this.

If elected, O'Toole will certainly reverse the Liberal ban and there won't be much "public review." Under the Liberal reclassification, current owners of the 1,500 newly banned weapons have until next April to surrender their guns or face criminal charges. That gives an O'Toole government only six months before his hard-core supporters have to part with their babies.

If O'Toole does end up reversing the assault-weapon ban, it will be yet another unforeseen blowback of calling a snap election.

It's been my experience, Cap, that those who call for law and order believe it is for someone else -- not them.

Since your post, O'Toole has changed course again. The ban will stay until it can be reviewed (wink, wink - then we'll repeal it).

O'Toole poses as a man of principle, Mound. But, obviously, he has only one principle -- whatever makes him prime minister.