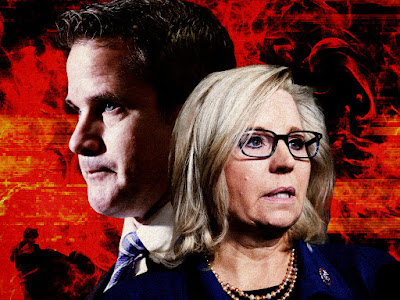 Jennifer Rubin wonders why Liz Cheney and Adam Kinzinger are still members of the Republican Party:

To recap: Kinzinger and Cheney’s party pushed the “big lie” that the election was stolen, overwhelmingly opposed impeachment, blocked a bipartisan commission, tried to undermine the committee and now has threatened private companies against cooperating. McCarthy also blatantly lied in saying the FBI had found the former disgraced president had “no involvement” in the violent insurrection (which he sparked with his call to action in the “stop the steal” rally).

Yet both Cheney and Kinziner remain loyal to the party:

We can praise Cheney and Kinzinger for their candor, but what are they still doing in the GOP and seeking to secure the majority for the Jan. 6 enablers, cheerleaders and rationalizers? It boggles the mind that Cheney, who has repeatedly stated that McCarthy should not be speaker (and surely wouldn’t support other Trump pawns such as New York Rep. Elise Stefanik, who replaced Cheney in the No. 3 spot in House leadership), will run under the GOP banner and certainly support other Republicans whose victories could secure the majority for the party that has embraced authoritarianism, lawlessness and nonstop lying.

There should be no doubt — and Kinzinger has repeatedly acknowledged as such — this is a party that is all about “pushing conspiracy and pushing division and pushing lies.” There’s no doubt that it will stoop to obstruction or embrace violence. Kinzinger is simply going to shrug his shoulders and recommend the country roll the dice on a party that has already proved itself contemptuous of truth, democracy and simple decency?

Kinzinger and Cheney’s advocacy for truth-telling about Jan. 6 is admirable. However, they have been unwilling to acknowledge that putting their party in the majority is not putting democracy and the Constitution above their party or their personal political futures. To the contrary, they are perpetuating the myth that the republic would do just fine with the GOP back in power and with Trump’s flunkies running the House. They know better, and it’s long past time for them to say so.

Apparently, both Cheney and Kinsinger believe that the Republican Party can be redeemed. The truth is that it is way past redemption.

Not part of the Cheney admirers, myself. Father or daughter.

"Cheney and Kinsinger believe that the Republican Party can be redeemed."

In this case 'redeemed' means to clean the GOPs image up slightly and lightly repudiate 'bad manners' in politics, (i.e. Trump style) while being anointed as the bipartisan savior of America.

That it won't work would be a schadenfreudic delight until the tRumpites take over again.

The corruption goes all the way back to Nixon, PoV. The party can't be saved.

Some, such as David Frum and Max Boot, believe the GOP is beyond redemption and only burning it to the ground can save it. That may be unrealistic, a naive hope.

American politics are transactional. If you want to win you had better be able to outspend your opponent. You could think that the Donor Class would be repulsed by the radical caucus but the primary results don't bear that out. Big money doesn't cling to morality. If the loonies do their bidding then they will overlook the lunacy of the tea party/freedom caucus.

Patrician Republicans thought the Donor Class was theirs. It isn't.

They can, however, try to raise a rival conservative party to split the vote and hand control to the Dems until the GOP comes to its senses. The Progressive Conservatives thought they could prevail over the Reform/Alliance radicals. Instead they were consumed.

Why are Cheney and Kinsinger still in the GOP? Simple. Their presence allows the party to continue to fundraise among the Upper East Side shut-ins whose wistful fantasies of a genteel Republican party are captured by David Brooks' columns in the NYT.

.. Per Northern PoV
'Polish the Turds'

The Trumpists won't disappear, Mound. But their numbers can be thinned by a rival party -- and by fielding candidates who won't pander to the loonies.

People like Brooks simply refuse to see that the Republicans are lost, -- totally lost, Cap.

I agree, sal. There's no way to "clean up" the party's image.