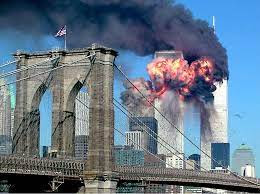 On the anniversary of 9/11, Chris Hedges offered these thoughts:

The explosions and collapse of the towers, however, were, to me, intimately familiar. I had seen it before. This was the familiar language of empire.  I had watched these incendiary messages dropped on southern Kuwait and Iraq during the first Persian Gulf War and descend with thundering concussions in Gaza and Bosnia. The calling card of empire, as was true in Vietnam, is tons of lethal ordnance dropped from the sky. The hijackers spoke to America in the idiom we taught them.

The ignorance, masquerading as innocence, of Americans, mostly white Americans, was nauseating. It was the worst attack on American soil since Pearl Harbor. It was the greatest act of terrorism in American history. It was an incomprehensible act of barbarity.

For Hedges, 9/11 was a case of what goes around, comes around:

We did not, and do not, grasp that we are the mirror image of those we seek to destroy. We too kill with an inchoate fury. Over the past two decades we have extinguished the lives of hundreds of thousands of people who never sought to harm the United States or were involved in the attacks on American soil. We too use religion, in our case the Christian faith, to mount a jihad or crusade. We too go to war to fight phantoms of our own creation.

And so, the cycle continues.

Email ThisBlogThis!Share to TwitterShare to FacebookShare to Pinterest
Labels: The 20th Anniversary Of 9/11

Recommended reading: https://orionmagazine.org/article/thoughts-in-the-presence-of-fear/
I saw this hard on the heels of 9/11 in the CCPA Monitor and asked to republish on a blog...they gave me a postal address for Berry and he said it was great, as long as I credited himself and Orion Magazine (still a supporting subscriber). States pretty elegantly how we got to our sad pass and hints at the way out.

"The hijackers spoke to America in the idiom we taught them."

Blowback 2.0 - coming soon to your neighbourhood?

Drones invade privacy and can deliver many type of weapons to any location.
Drones should be banned, period.

(OK allow a few regulated ones for search & rescue, film.)

Our latest weapons technology always comes back to b used against us, PoV.

Thanks for the link, Danneau. There is a way out. But we never seem to take it.


It could be that the post 9/11 era was America's real introduction to "shock doctrine." An entire nation deeply traumatized and plenty of corporations ready to exploit the opportunities. The former CEO of Haliburton presided as his nation's first nominal co-president but why settle for Afghanistan when the oil fields of Iraq were ripe for the plucking.

America even overhauled its military-industrial complex to admit new partners - neoconservatives, corporate suppliers (contractors like Blackwater and Haliburton), evangelical Christians, each scratching everyone else's backs. Warfighting, combat, was allowed to admit for-profit enterprises. Mercenaries under the wing of the State Department.

$12 billion in cash was delivered to the Coalition Authority in 2004. $9 billion remains missing, unaccounted for. How does $9 billion in pallets of cash simply disappear? How can that much money not be traced? And we thought Apocalypse Now was fanciful.

Andrew Bacevich chronicled this madness in his 2005 book, "The New American Militarism: How Americans are Seduced by War." Today they can't start a football game or a NASCAR race without the obligatory prayer and some jet flyover.

"Thank you for your service."

The United States has been seduced by its own propaganda, Mound. The nation was born out of armed conflict. Unfortunately, it sees its purpose as extending armed conflict.