Lessons From The Election 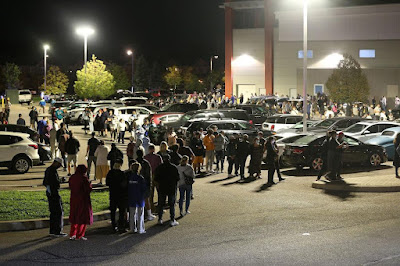 Robin Sears writes that there are three lessons we should take from the Federal election:

Lesson one: We need a major overhaul of Elections Canada’s recruitment, training and election readiness. While we’re at it, let’s add several more advance polling days, culminating on a Sunday election day — the choice of most democracies around the world.

Lesson two: Remove all the TV networks from debate production, hire independent producers with no network affiliation, grant the hosting to a qualifying university or civic organization, and hold two debates in each language. The “real” campaign was triggered by three of the worst political debates in Canadian political history, and that was an already very low bar. Game show sets, ridiculously short sound bites, too many preening journalists, and the now infamously inappropriate question hurled angrily at Bloc Leader Yves-François Blanchet — a gaffe that probably moved several seats in Quebec.

Lesson three: Increase the penalties for any form of co-operation with a foreign power interfering in an election, including accepting payment, to a level that will help deter Canadians from being frightened into spreading slurs about any candidate or party. Name and shame those identified, and if any have diplomatic status, expel them. Mounting evidence of the Chinese Communist Party and its local agents attempting to disrupt the voting in Chinese-Canadian communities is disturbing. They may have prevented some Conservative victories in Vancouver and Toronto. We should have anticipated and prepared for this. The Chinese were much more secretive in their disruption plans than were the Russians and the Iranians during the Trump campaign, but more witnesses will no doubt emerge.

When it comes to elections we live in a brave new world.

"Mounting evidence of the Chinese Communist Party and its local agents attempting to disrupt the voting in Chinese-Canadian communities is disturbing. "

Fair enough. No one like pesky foreigners interfering in our elections.

And Paul Manley's defeat?
A certain ethnic group with strong ties to a highly militarized foreign nation pledged to get rid of him and any other MPs that challenges their narrative.

A quote from Noah Zatzman:
"We will not accept an apology after you realize what you’ve done. We will work to defeat you and bring in progressive climate champions who are antifa and pro-LGBT and pro indigenous sovereignty and Zionists!!!! .”"

The crazies are getting louder, PoV.

Lesson one: We need a major overhaul of Elections Canada’s recruitment, training and election readiness.

Not really fair given we have a pandemic and a lot of election workers are probably over 59. Are we really willing to commit the funds to ensure we can deal with another pandemic?

Lesson two: Remove all the TV networks from debate production,
Sounds great to me

Lesson three: Increase the penalties for any form of co-operation with a foreign power interfering in an election
Sounds fine to me but what is the evidence of foreign influence? It may exist but ....?

If, as Sears suggests, there were more days of early voting, probably the lines would be shorter, jrk.

Northern PoV
It is startling that you can criticize China, India, Russia, USA etc. without fear, yet a certain ethnic group with strong ties to a highly militarized foreign nation you are afraid to mention.

Yes!
I am guilty of being coy
But it was all just a ploy
to show there's really no joy
In being the skeptical goy

If you are still puzzled please check out the last word in the post.
Google it if need be.

(apologies for my pedantic reply, if in fact you were in fact just playing along)