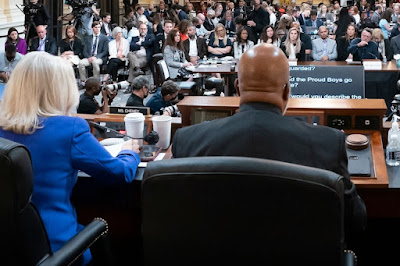 Last night, the House Select Committee investigating Trump and Co.'s attempted coup held its first hearing. It aimed to educate. It did that in spades. Jennifer Rubin writes:

The challenge for the committee is to tell a coherent story of the entire plot and to dispel the myth that the coup attempt was only about the Capitol assault. The committee has so far succeeded. Its initial telling of the far-flung plot — peppered with new, damning tidbits of Trump’s willful pursuit of power — was breathtaking.

And make no mistake. They're taking direct aim at Trump:

If Trump is ever to be held criminally accountable for the coup attempt, prosecutors will have to prove beyond a reasonable doubt that he knew what he was doing was wrong and unjustified. Here, the committee demonstrated there may be ample evidence of that.

Trump was repeatedly told his claims of voter fraud were bogus. New video of former attorney general William P. Barr’s testimony to the committee showed that he told Trump his fraud claims were “bulls--t” and “complete nonsense.” In addition, a sample of testimony from other Trump officials showed claims of fraud were repeatedly debunked and ridiculed. Justice Department officials and the White House counsel threatened to quit if Trump persisted in deploying the lie to retain power. Officials told Trump it was illegal to pressure former vice president Mike Pence to throw the election to him.

Other anecdotes solidified the image of a president fixated on remaining in power. Trump reportedly declared of calls to hang Pence: “Maybe our supporters have the right idea. Mike Pence deserves it.” Cheney’s retelling was bone-chilling — an indication of a dangerous character bent on overthrowing an election.

It was Pence who gave the orders that day to get the National Guard to the capital, while Trump sat in the dining room watching TV and enjoying the show. But most riveting was the video of the violence from that day. Trump claimed that there was "love" in that crowd. The video shows that these thugs had murder on their minds:

Seeing new video, and hearing audio of desperate police describing the attack, was nothing short of terrifying. The cruelty and lawlessness of the mob are indisputable. Trump’s words insisting that “love was in the air” was a powerful reminder of his capacity to lie.

Testimony from Capitol Police Officer Carolyn Edwards, who was abused and injured on that day, made clear that no reasonable person could doubt the crowd’s viciousness and anger. Filmmaker Nick Quested testified that the mob appeared well organized. This was no spontaneous uprising.

It was a good beginning. Let's hope the rest of the hearings are as equally instructive.

The rest of the hearings could go ahead at a careful pace, IF there was no rush. Imagine if the pro Trumpers controlled the House of Reps from November on, the entire process could be silenced.

On TV! Primetime, no less. Deliverance is near ..... but what is the destination?

This process will make many people think that their side is winning when, in fact, the 'alternative facts' crowd have moved on and rule the USA.

That's exactly what will happen, hels, if they take back the House.

It's a teachable moment, PoV. The question is, "How many Americans are capable of learning?"

As interesting as these hearings are, they're too little, too late. We're now 17 months past an attempted coup, and the DOJ has only charged and convicted small fry.

As Steve Phillips points out in the Guardian, "The last time the United States failed to properly punish insurrectionists, they went on to form the Ku Klux Klan, unleash a reign of murderous domestic terrorism, and re-establish formal white supremacy in much of the country for more than 100 years." The GOP is well on its way to doing much worse by fixing elections so they can't lose. The midterm elections are only months away. Garland needs to get his finger out and start charging the ringleaders.

This is all about going to the top, Cap -- where it all started.

The problem , is, with taking someone that is influential down ; as in Donald Trump, is that other marginal characters such as Hillary, Biden junior , not to mention Boris Johnson , Canada's Brain Mulroney and Gordon Campbell, to name a few could be taken to task.
That would not suit the money launderers well!
Politics be damned , when it comes to profit $$$ there are not enough political representatives in the world to make real change.

Marx was correct when he said capitalism would destroy itself but his offering was no less so!

Big Money is at the root of the problem, TB. It's been that way for a long time.