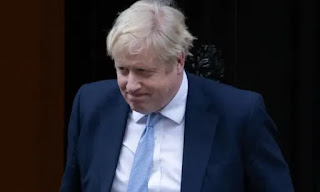 This could be Boris Johnson's last day in office. The Guardian reports that:

Boris Johnson is to face a vote of no confidence on Monday evening after the threshold of 54 letters from Conservative MPs seeking his departure was reached.

In a statement Graham Brady, the chair of the 1922 Committee that represents backbench Tories, said the threshold of 15% of MPs seeking a confidence vote, numbering 54, “has been exceeded”.

“In accordance with the rules, a ballot will be held between 1800 and 2000 today, Monday 6 June,” it continued. “The votes will be counted immediately afterwards. An announcement will be made at a time to be advised. Arrangements for the announcement will be released later today.”

To stay in office, Johnson needs to win the support of at least 50% of all Tory MPs plus one, totalling 180. If he does win he is theoretically safe from such a challenge for a year – although the rules can be changed.

Asked about this on Monday, Brady confirmed to reporters that this was the case: “Technically it’s possible for rules to be changed but the rule at present is there would be a period of grace.”

Brady said he told Johnson on Sunday that a vote would happen, and liaised over the timing: “He shared my view, which is also in line with the rules that we have in place, that that vote should happen as soon as it could reasonably take place, and that would be today.”

Johnson's defenders are lining up:

In an immediate show of support, the foreign secretary, Liz Truss – who is widely assumed to be a contender if Johnson goes – tweeted: “The prime minister has my 100% backing in today’s vote and I strongly encourage colleagues to support him … He has apologised for mistakes made. We must now focus on economic growth.”

Other cabinet ministers also issued supportive messages, among them Rishi Sunak, the chancellor, and Dominic Raab, the justice secretary and deputy prime minister.

Everywhere, it seems, conservatives are in a foul mood. Stay tuned.

Email ThisBlogThis!Share to TwitterShare to FacebookShare to Pinterest
Labels: British No Confidence Vote

"He has apologised for mistakes made. We must now focus on economic growth.” What does this even mean? Boris's apologies are as worthless as Tory economic policies.

The cash registers keep ringing up, "No Sale," Cap.

Does it really matter? ....
beyond the fascinating inside-baseball, gossip aspect and the schadenfreude anticipation?

A new CON may take over and, even if the CONs were to lose in some future electoral-chimera, Labour has been safely defanged with some forgettable cipher whose name escapes me but I think it sounds like 'stammering.

Much like the UCP situation in Alberta. Infotainment to distract from the ongoing extinction event.

The serious British newspapers suggest Johnson will, just, survive.
He will then be able to concentrate on returning to true British values of stones and pounds plus reviving British Leyland to manufacture Morris Minors!
Expect another Tory statue to be erected this time for Enoch Powell.

They're running around in circles these days, PoV.

As always.. nannering of ‘Nation Building’
is the holy moly blessed GRAIL..

The concept of Overpopulation
ain’t gonna win no votes
Hell.. let’s develop the flood plains
catch all the fish in the sea

Anyone notice that the countries
with the fasted population growth
are to great extent dependent on protein
extracted from the oceans ?

As Mound might point out..
that means fishing down the species
bottom dragging ..

I just read that Johnson has survived the vote by 211-148, sal. That's a lot of people in his own caucus who want him gone.

Boris; with this vote of confidence
i have a mandate to pursue the wishes of the public( that voted for me).
I am deeply and emotionally charged by you , the inspirational , Brexiteers who have made this all possible.
We will, in the near future re establish the virtues of the golden age of Victorianism and get Britain working again..
For those that have some doubts of my Britishness I will install , at all points of entry to England; machinery ( of English! whoops,UK) origin although manufactured in China, that detects persons who have not been exposed to the sun other than on winter holidays...

It's quite possible TB, that Boris will misread the situation.

Boris , like so many others of his ilk survive to continue the profit and inherent position of wealth and status that lays beneath their position in life , elected or not!
Much of Boris's stature comes from the influence of Russian Oligarchs financing and continues to do so.
That we think that the Lords and Majesty lost their influence with the Magna Carta
is the biggest fake news of history..............

I recall another leader who got to where he is with the help of Russian money, TB.