Will It Be Poilievre? 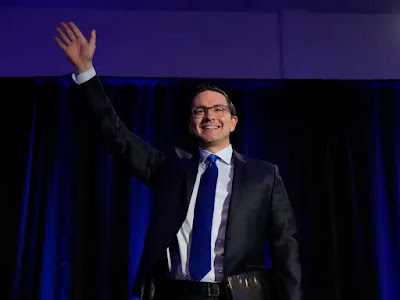 Chantal Hebert writes that the Conservative leadership race is Pierre Poilievre's to lose -- and there's plenty of time for him to do it:

If the Conservative leadership vote took place tomorrow, front-runner Pierre Poilievre would probably be able to turn his lead into a quasi or definitive first-ballot victory.

But with the vote set for Sept. 10, the Ottawa MP is instead about to spend what could turn out to be the longest three months of his already lengthy political tenure.

90 days is an eternity in politics, and recent Conservative campaigns have demonstrated it is one thing to round up members and another to ensure they vote.

In the 2020 leadership vote, almost 100,000 of those who had signed up to cast a ballot failed to do so. That works out to about 40 per cent of the membership.

To stay out of his rivals’ striking distance, Poilievre will have to spend the summer trying to keep his followers engaged.

Whether he can do that is an open question:

A fair number of his recruits are new to party politics. Many were attracted to his campaign by his overtures to the so-called “Freedom Convoy” and to the people who occupied the national capital earlier this year.

It is in no small part to cement their allegiance that Poilievre recently promised legislation to prevent a future federal government from implementing vaccination mandates.

That commitment went down like a lead balloon among the majority of Canadians — including scores of Conservatives — who supported vaccination mandates over the two years of the COVID-19 pandemic.

Every time he doubles down on his more outlandish pronouncements, be it on vaccines or bitcoin or the Bank of Canada, Poilievre risks doing so at cost to his credibility as a leadership contender and, to a lesser degree, as a potential party leader. It is not every one of his followers who signed up for a spell of disruptive leadership.

If only to avoid having to spend the summer replaying his most polarizing hits, Poilievre must hope either Jean Charest or Patrick Brown decides to bail out of the race before the vote.

And, Hebert warns, "a Charest defeat at the hands of an attack dog on Sept. 10 is more likely to hurt the Conservative brand than to diminish the former premier."

The issue is not Poilievre but the demise of the Conservative vote which is self destructing and shows some disturbing facts of the 'new' nature of Conservatism.
Canada is without rational , realistic opposition .
What opposition we have left is the knee jerk reactions to mimic the USA which does not bode well for Canada.
Throughout my 70 plus years i have seen the so called 'left' disappear where Socialists have become Liberal and the Liberals have become Conservative.
Whatever; social conscience is not what it was in my youth or the present day!
To be simplistic , with world with diminishing resources , we find ourselves fighting over the remnants of a bygone age of plenty!

That's true, TB. We fight over remnants -- like lions at an African waterhole.

iow, The Overton Window has been yanked to the extreme right since we acquiescent Boomers came of age.

We live in Huxley's 'World State' with a pinch or Orwell's Big Brother for additional flavouring.

Huxley and Orwell saw what was coming, PoV.

A Puff Of Absurdity - Marie Snyder has an interesting post currently
It deals with the toilet - septic tank aspects of Plymouth Brethren Christian Church
Who else but Poilievre would be so ready to flush ?

Her post needs editing & polish.. but completely understandable..
How many of us can paraphrase Alice in Wonderland meets Animal Farm
into one sensible reflection about a looking glass slathered in lipstick

If this thing is headed where I think it’s headed.. we may remember
Plymouth Pierre as a Hindenburg level disaster, people burning,
clinging to tethers, jumping ..

I foresee much ‘time with family’ on the horizon for many
but the sickening & obvious thing is Canadian Mainstream Media
as interested as Fox, Tucker & Hannity re the Jan 6 Select Committee

The biggest political scandal in Canadian History ?
I ain’t at all sure it won’t turn out that way
despite the reality that 75% of our Mainstream Media
will be complicit in trying to put the fire out

It's disturbing to see how far-reaching this is, sal.