The Crazies Have Found A Home There 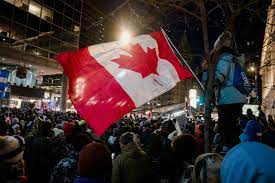 Think the United States is the only place with a large loud population of crazies? Think again. We've got them, too. Alex Boutilier reports that:

Key figures of the convoy protests and related organizations were welcomed to Parliament Hill on Wednesday by a group of Conservative MPs that assured them they have ‘allies’ in Ottawa.

And while the group professed peaceful intentions for future demonstrations, they also warned they believe Canada was on a “dark path,” deeply “divided,” even showing similarities to countries about to descend into “civil war.”

The Ottawa press conference was scheduled to coincide with a conference of the “Canada Citizens Coalition,” or C3, an umbrella group for various protesters connected to February’s convoy demonstrations that paralyzed downtown Ottawa and blocked several Canada-U.S. border crossings.

The protests were purportedly sparked by an opposition to federal vaccine mandates for cross-border truckers, but quickly morphed into a festival of grievances with federal and provincial authorities.

Several Conservative MPs showed up to pledge their support:

They were greeted by multiple Conservative MPs, including leadership candidate Leslyn Lewis, Jeremy Patzer, Ryan Williams, Arnold Viersen and Dean Allison – among others.

“You do have allies. You’ve had allies all along, and so I just wanted to encourage you guys going forward.”

Conservative leader Candice Bergen claimed her party had no hand in organizing the event. But Canadians should beware of her party. The crazies have found a home there.

"The reality is there’s one political party that has been represented around this table here today..." and it's the political party that's been stoking this insurrection from the start. Time for our so-called liberal media to expose the Con operatives, Trump advisers and other crackpots organizing this.

This is the Canadian version of Trumpism, Cap. And, as the hearings in Washington continue to reveal, it's very, very dangerous.

Uh, sedition like the Covid convoy? Way to go!

I had not realized just how crazy many Cons are. Oh, some sure. Hi Pierre, hi Candace, but I thought more backbbenchers had at least a tenuous grasp on san

I have a different view of what those members of the Conservative may be doing. Although it seems they are intentionally stoking a fire by speaking to people who were involved in last winters confrontations for their own political gain, there is another side, and it has to do with democratic freedom. Canadians who feel wronged have the freedom to seek support from lawyers, police, or members of government (regardless of the member's party). Our country would be in serious trouble if those channels were closed: Canada would look very much like something other than a democracy. In the case at hand, Conservatives who are meeting with protesters are acting as they should in our democracy - even if seems they are merely trying to cause political trouble for the party in power. That's for the electorate to decide.

The Conservatives have decided to go down the rabbit hole, jrk.

I agree, CD. That's for the electorate to decide. And, if they're paying attention, they'll know where the Conservatives want to go.

@ CD
"Canadians who feel wronged have the freedom to seek support from lawyers, police, or members of government (regardless of the member's party)."

Certainly, but delivering coffee & pizza to the occupiers is encouraging people who were advocating sedition and signalling to the rest of Canada that you approved of their various egregiously offensive and very likely illegal behaviours. I am not sure that this is a proper role for a member of parliament.

11:52 am…..Placating extremism doesn’t get anyone anywhere. Chamberlain learned that in September 1938. Anyong

I agree, Anyong. Placating extremism only leads to more of it.