To Accomplish Their Ends 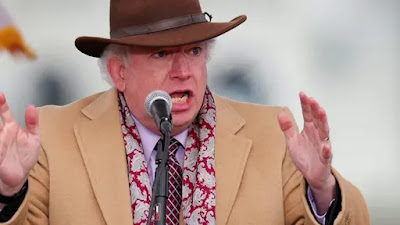 John Eastman was at the centre of yesterday's hearing into the Trump insurrection.  Paul Waldman and Greg Sargent write:

The committee and witnesses offered a devastating case against Eastman, one that both reinforced what was already known and offered new information that made the president and his pet lawyer’s conduct look even worse — and perhaps criminal.

But as you ponder the case against Eastman, remember this: Eastman functioned as Trump’s agent throughout. Trump directly instructed his vice president, Mike Pence, to heed to Eastman’s advice, and to carry out his scheme.

And, as the hearing proceeded, two things became very clear:

First, it showed that Eastman might have fully understood that his scheme — which entailed getting Pence to delay the electoral count in Congress, giving states time to certify sham electors for Trump, based on a fictional legal theory — could lead to violence. And Eastman apparently shrugged off this possibility.

Eastman sought a pardon from Trump. It’s hard to say what this means: Eastman didn’t get one, and he might simply say he figured he’d be prosecuted, martyr-like, by the incoming regime. But it appears to reveal consciousness of legal vulnerability.

Trump claimed that he was going to hire "all the best people." It's abundantly clear that Trump hired people like himself -- people who had no conscience and who would employ violence to accomplish their ends.

Email ThisBlogThis!Share to TwitterShare to FacebookShare to Pinterest
Labels: Eastman

Eastman plead the "5th" more than a hundred times. Excellent analogy on Democracy now for your interest Owen

Clearly, zoombats, Eastman is one of those people who Hemingway characterized as "lower than snake shit."

“I’ve decided I should be on the pardon list if that’s still in the works,” said the frog to the scorpion. Eastman's a disgrace to his profession.

Given the 'alternative facts' Twilight Zone we've all been trapped in, I ain't holding my breath waiting for a good ending here.

OTH, here is a really good TV show about an American scandal that shocked 'both sides' way back when: Gaslit

"Jeff Simon: I almost ignored the Watergate-era miniseries 'Gaslit.' That would have been a terrible mistake"

I'm waiting to see how long it will take before he's disbarred, Cap.

Gaslighting is what it's all about, PoV.