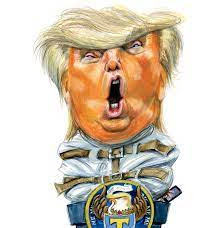 Another day of hearings in Washington and the story keeps getting darker. Dana Milbank writes:

Two weeks of hearings by the select committee have made clear that the insurrection itself was but a manifestation of a much larger plot by Trump to overturn the election by any means necessary: violence, martial law, seizing voting machines, fake electors, intimidating state officials, harassing election workers, drafting meritless lawsuits — and a contemplated putsch at the Justice Department.

It's quite clear now that Trump himself is certifiable. And he surrounded himself with people who were as crazy as he is:

Though many in the Trump administration admirably (if not quite heroically) resisted his illegality, Trump was aided in his depredations by a seemingly limitless supply of crackpots willing to do his bidding. There were Trump lawyers Rudy Giuliani (‘nuff said), Sidney (“The Kracken”) Powell (Trump wanted her to be appointed as an independent counsel investigating election fraud) and John Eastman, who knew his cockamamie scheme to overturn the election was illegal.

The hearing yesterday focused on one of the crazies -- Jeff Clark -- whose house was raided yesterday by the FBI, while he stood outside in his pajamas. But there were all kinds of other crazies:

Screwballs enabled Trump in Congress, as well. There was Sen. Ron Johnson (R-Wis.), whose chief of staff tried to deliver a slate of fake electors to Vice President Mike Pence. And there was Rep. Scott Perry (R-Pa.), who championed Clark for the attorney general job. According to testimony released by the committee Thursday, Perry was among those seeking presidential pardons for their actions, along with Reps. Mo Brooks (Ala.), Matt Gaetz (R-Fla.), Louie Gohmert (R-Tex), Andy Biggs (R-Ariz.) and possibly Marjorie Taylor Greene (R-Ga.). Trump apparently considered blanket pardons for lawmakers and staff involved in the insurrection. At one point, Trump, frustrated that DOJ officials weren’t backing up his lies, urged them: “Just say the election was corrupt and leave the rest to me and the Republican congressmen.”

However, the loonie who directed it all was Trump:

At the center of it all was the crackpot-in-chief, whom Attorney General Bill Barr belatedly realized was “detached from reality.” He manipulated the government to back his election lies in ways that had been unimaginable. Donoghue testified Thursday about how Trump chief of staff Mark Meadows repeatedly insisted that DOJ investigate a YouTube-driven conspiracy theory claiming the CIA and MI6 worked with an Italian satellite company to erase Trump votes. Donoghue called it was “pure insanity,” “patently absurd” and “debunked.” Not satisfied with that answer, Trump’s White House secured the help of Pentagon official Kash Patel and acting defense secretary Christopher Miller, who reached out to an official in Italy to probe the bogus claim.

With so many screwballs running around, it's amazing the whole place didn't blow up. In truth, it almost did.

Had it not been for the rational and courageous few who did the right thing, it seems likely there could have been a serious government meltdown, and it does seem that Trump and his minions were "crazies"- or at least ruthless extremists, as happened in Nazi Germany when a minority of Germans, through propaganda, fear, and hatred, gained control of the government, destroyed that country's institutions (especially its judiciary) and convinced most of the country to accept self-destructive notions of racial superiority and purity, and the goal of world domination. Given where those machinations ultimately led, "Crazy" was the correct term to describe Hitler and his early supporters, and it correctly describes Trump and his close allies who were willing to turn the USA on its head for their own ends.

Giuliani, Powell and Eastman are all lawyers willing to violate their oaths of office and professional codes of conduct to further Trump's attempted coup. Their requests for pardons show consciousness of guilt. Calling them crackpots and screwballs lets them off the hook. They should be called "disgraced lawyers," as some articles do.

All of this is proof that one man's insanity can lead to national insanity, CD.

I take your point, Cap. They were crazy like a fox.

I remember reading something a while back that one of the few books Trump ever read was "Mein Kampf. Maybe that explains his fixation with Fascism.

I haven't read that, Muttsy. But I do know that Trump isn't smart enough to think up this kind of stuff on his own.

6:17 pm…..I remember an interview on CBC before Trump was elected President where the person interviewed said that Trump had a copy on his night table of “Mein Kampf” which he read every night. I have tried to find it but cannot. It was the“Ideas” program. Anyong

@Owen
Re Muttsy's comment. I believe it was a comment by Trump's first wife who said he kept a copy on the bedside table.

Considering the question of Trump's level of literacy she may have had to read it to him. /s

Both Anyong and jrk confirm the story about Trump's interest in Mein Kampf. Certainly, Trump's behaviour mirrors Hitler's. Given what we've discovered from the hearings in Washington, it's no longer a stretch to compare Trump to Hitler.

I don't things are on what I would call an "even keel" yet and aren't likely to happen in the near future. There has been an increasing rise in "Christian Fundamentalism" which I liken to "Muslim Fundamentalism" - at least I can't see any real difference in their goals - and I don't see that mindset going away any time soon.

This can mean more of control the the overall population and certainly by those that "have" the control financially as well as politically of the masses.

My father and his family came out of war torn Northern Ireland in the 1920's for that very reason and while he was raised with a belief in the idea of Christianity itself, he also taught all us kids that "organized religion is just a dreaded disease". I've come to understand why he thought that way.

People can do insane things, Lulymay, when they're convinced that God is on their side.