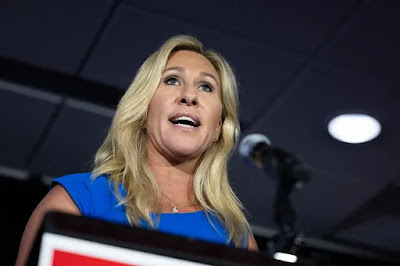 If ever there was a woman who fits the stereotype of the dumb blonde, it's Marjorie Taylor Greene. The woman who has referred to Hitler's secret police as the "Gazpacho" and a petri dish as a "peach tree dish," has now taken aim at Justin Trudeau. Alex McKeen writes:

“Trudeau quickly filled his father’s shoes,” she posted to Twitter. “But in Canada not Cuba.”

The quip appeared to be a reference to the baseless online conspiracy theory that Justin Trudeau is Fidel Castro’s son. It originated in right-wing chat rooms around 2018 and re-emerged around the time of the Freedom Convoy this winter. Justin Trudeau’s father was former prime minister Pierre Trudeau.

The larger context of Greene’s tirade against Trudeau was not about his parentage, but guns.

Numerous gun rights promoters in the U.S., already on the defensive following the mass shooting at Robb Elementary in Uvalde, Texas that killed 19 students and two adults, reacted to the news from Canada with disdain.

In a Twitter thread aimed at Trudeau, Greene wrote that the move was a “terrible violation of rights to innocent Canadians” and suggested that Canada needs private citizens to be “heavily armed” in order to deter attacks from other countries, like Russia.

There was a song several years ago about a woman like Greene. The lyric read, "I gaze upon that lovely dome, and realize there's no one home."

The “dumb blond” label was applied to Monroe. She was not dumb by any stretch of the imagination. Greeny is not blond if you look closely but a wanna be. Greeny should not be given one once of publicity in this country what so ever. Maybe, just maybe we need to build a “wall” Smile! Anyong

Monroe was much smarter than Greene, Anyong. The bigger problem is that the Republican Party is full of Greenes.

Following a school massacre, students and staff are reluctant to return to the scene of the crime and pick up as though nothing happened. So the US federal government has a program that pays to demolish and rebuild these schools. Sensible gun laws mean there's no need for a similar program here. I thought Republicans were all about less government.

Just when I'd managed shake the shackles of misogyny and to conjure up Boris Johnson as the ultimate dumb blonde, you do this to me?

The bigger problem is that the Republican Party is full of Greenes.

Even bigger problem is that the US electorate voted for her and others of her kind.
The US is becoming a leper colony.
TB

One can only conclude, TB, that a vast swath of American voters is as dumb as Greene.

so if we are going for lyrics
i'll take
"You're just a three dressed up as a 9
You're only, wastin' my time
A three dressed up as a 9, hey yeah
or actually "American Woman"
"American woman, get away from me
American woman, mama let me be
Don't come a knockin' around my door
Don't want to see your shadow no more"
just do the whole song
https://www.google.ca/search?hl=en&q=American%20Woman%22

And Rupert Murdoch is doing his best to make Americans even more ignorant.

MTG's father owned a successful construction company in the Atlanta area of which she has been a benefactor. Her wealth is estimated at $30 million. Her husband worked for the family construction business. Claiming to be Christian, she has had two affairs. She also videoed herself harassing Stoneman Douglas shooting survivor David Hogg. An all around disgusting person is MTG, a wannabe Trump with less makeup and hair dye.

Parton's a very bright -- and a very shrewd -- woman, lungta.

She works hard at being a Trump wannabe, perfect. And she is as shameless as he is.