The Loonies Were In Charge 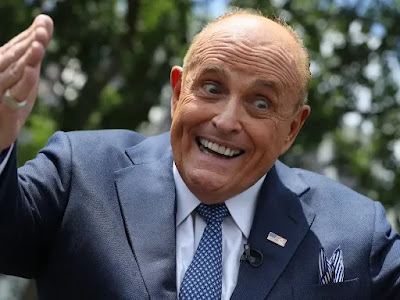 Rudy Giuliani was Donald Trump's most trusted advisor. And Giuliani was too well lubricated to advise anyone. That's one of the conclusions you have to reach after watching yesterday's hearing into the Trump insurrection. Dana Milbank writes:

Giuliani, once America’s Mayor and Time’s Person of the Year, long ago became a national punchline, with his melting hair dye and his post-election news conference at Philadelphia’s Four Seasons Total Landscaping. But thanks to the select committee, we now know that people inside the Trump administration and campaign also thought him preposterous — with one key exception: Trump.

The committee relived some of Giuliani’s most ludicrous claims, sometimes accompanied by footage of his wild-eyed TV appearances. Votes “in garbage cans” and in “shopping baskets” being wheeled in for counting under orders from Frankfurt, Germany. Eight thousand dead people voting in Pennsylvania. A suitcase full of ballots pulled from under a table in Georgia. Votes manipulated via Italy, the Philippines and a deceased communist dictator in Venezuela.

In depositions screened by the committee, a veritable parade of Trump advisers testified that they told the president what they thought of such ideas: “Bull---t.” “Completely bogus.” “Silly.” “Completely nuts.” “Crazy.” “Incorrect.” “Debunked.” “Idiotic.”

White House lawyer Eric Herschmann, in his videotaped deposition, wondered aloud whether Giuliani, “at this stage of his life,” had “the same ability to manage things at this level or not.”

Trump campaign lawyer Matt Morgan, in his deposition, spoke about his conversations with outside counsel: “The general consensus was that law firms were not comfortable making the arguments that Rudy Giuliani was making.”

Giuliani was too bombed to see reality and Trump's Attorney General, Bill Barr, said that Trump was "detached" from it.

The loonies were in charge.

Rudy's been crazier than a shithouse rat for a long time, and the NY bar association received hundreds of complaints about him, including from judges. They held their noses and didn't act until Jan 11, five days after Rudy helped incite an attempted coup.

As JS Mill said, "Bad men need nothing more to compass their ends, than that good men should look on and do nothing." The loonies aren't the only ones responsible for the mess the country's in.

Quite true, Cap. Shithouse rats carry disease. And the disease Rudy keeps spreading is so contagious because so-called "good men" have looked the other way.

The only good thing to be said about Giuliani, Owen, is that he did and does provide comic relief during these dark times. You can always count on Uncle Rudy to say something outrageous.

Rudy has been melting down in public for quite a while, Lorne.

Rudy has been melting down in public for quite a while

And I thought it was just hair dye!!

It was the hair dye that gave it away, TB.

Sad we a laughing at people that make serious decisions with serious consequences.

Foolish people are always the butt of laughter, TB. They can also be very dangerous.