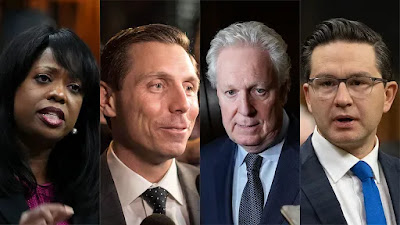 One wonders if the Conservative Party of Canada will ever hold a leadership race without turning it into a master class of mud-wrestling, hanky-panky, and mutual denunciation.

They are usually so busy slagging each other, any notion of policy is at best an after-thought. Sorry guys, but squealing “freedom” at the top of your lungs while tying up a city is not a policy.

Pierre Poilievre, the slur-king of the current leadership, now says that the Patrick Brown campaign is cheating.

Poilievre lodged a formal complaint, accusing his rival of reimbursing membership fees paid by people who agreed to join the party. Brown has made public that he sold 150,000 memberships—a number Poilievre claims is bogus. How, one wonders, would he know, one way or the other?

In addition to the reimbursement charge, it is alleged by the Poilievre camp that the Brown campaign offered “additional financial inducements.” What does that mean? Cash, a bit of bitcoin, free beer? What?

But this kind of cat fight isn't new:

It is interesting that Poilievre has already smeared Brown before, repeatedly calling him a liar. He accused the mayor of Brampton of lying about his position on sex education in Ontario, his position on the carbon tax, and in his critique of the Harper government, of which Poilievre was a key member.

Poilievre seems to have forgotten all about his own attempt in government to de-tune democracy with the risibly named Fair Elections Act, and that other legislative stinker from Harper-times, the Zero Tolerance for Barbaric Practices Act. Strange way to support immigrants.

Poilievre is dissing Brown because Brown could hold the key to who wins the party leadership in September. If Brown’s membership numbers are correct, and the leadership should go to a second or third ballot, Brown could very easily deliver a victory to Jean Charest. So far, the Charest camp has been coy on its membership numbers, saying only that it has a path to victory in the fall.

That is precisely why Poilievre tried to paint an unflattering picture of Charest as a philosophical liberal who was in the pocket of the Chinese as a private consultant. He’s worried.

If Poilievre can get people talking about the moral poverty of his rivals, they may forget about his own blunders on this campaign. He extolled the virtues of bitcoin to Canadians as a hedge against inflation, without telling them he had investments in it. He later claimed that he checked with the ethics commissioner, who gave him the green light.

Poilievre also did his Donald Trump imitation in a childish outburst about firing the governor of the Bank of Canada.

Even Conservative MP Ed Fast came out against Poilievre for his comments about Tiff Macklem. And Poilievre is still missing in action on some big files—from climate change, to the rising tide of authoritarianism around the world. That hole in his resumé earned criticism of the party from former Conservative prime minister Kim Campbell. It isn’t hard to figure out who she is talking about.

It wouldn't be a Con leadership race without accusations of cheating. O'Toole accused MacKay of stealing his campaign info, and before that, Bernier accused Scheer of cheating and quit the party. Under Harper, of course, the Cons became the first and only party in the Commonwealth to be convicted of electoral fraud. Cheating is a way of life with these guys, which is why they assume everyone else cheats too. It's a helluva way to run a party, let alone a country.

If they can't govern themselves, Cap, they will be incapable of governing the country.

If the Conservatives are serious about their desire to form government, they had better get serious about picking a reflective and responsible leader, Owen. I see neither of those qualities in Poilievre.

Conservatives seem to define themselves as proudly ignorant, Lorne. That's not a moniker that leads to success -- on most occasions.

. When I see or hear Poilievre
I hear Him + Jenni Byrne
Neither are strangers
to Electoral Fraud

It appears, sal, that whoever wins the race will be accused of electoral fraud.

They all have learned from the best, heck Stock posted just last week that a still frozen lake in the Alberta mountains was definitive proof of the climate change hoax. Poilievre may gain ground but in the end, he is a good soundbiter and floats new sayings that he thinks will take hold- gatekeepers, a new version of the liberal elite, is making the rounds. Problem for him is that he keeps proposing new ways to gate keep. The others in the "race" are totally irrelevant and don't stand a chance against the stupidest who has crept to the front of the line. Running for Prime Minister you say Pierre? Good luck with that . BC Waterboy

Pierre is full of bile, waterboy. But other than that, there's not much there there.