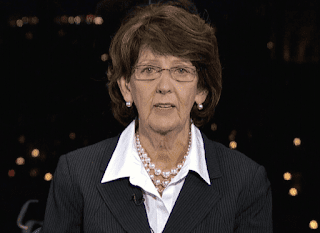 Marjorie LeBreton writes that it's make or break for the Conservative Party of Canada:

I have been a Conservative all of my adult life, witnessing firsthand the party’s evolutions and iterations over 60 years. Throughout that time – as I went from being a secretary at party headquarters and in John Diefenbaker’s office through years as a war horse in battles that all seemed momentous at the time to my grateful service in the Senate of Canada — there was always a common bond that held Conservatives together as we worked in the best interests of the party and of the country.

And these days that bond -- such as it is -- is very fragile. The chief reason for that fragility is that the party has been wandering in the desert for a long time:

I point out the simple fact that since I first joined the staff of the party during the final year of the Diefenbaker government in the 1960s, our party has been in power only three times – in 1979, with the short-lived Clark government; from 1984-1993 with the government led by the visionary and courageous Brian Mulroney; and from 2006- 2015 under the highly intelligent and disciplined Stephen Harper. If you do the math, that’s a grand total of 19 years in the past six decades.

Now, I fervently believe that the Conservative Party has reached an existential choice. The current leadership race is the third in six years, and the message that sends to Canadians in general cannot go unheard by Conservatives in particular: We have to get it right this time. I fear that if we don’t, the great accommodation reached by Stephen Harper and Peter MacKay in the fall of 2003 could fracture, possibly beyond repair.

Clearly, this trend cannot continue if we are serious about earning the support of Canadians in future elections. Setting aside the unseemliness of the treatment of the last leader, Erin O’Toole, and what that says on a human scale, it was clear that he had lost the support of the caucus. The party moved swiftly to set in motion the process for choosing the next leader. Personally, I applauded the Leadership Election Organization Committee for resisting demands for an early vote, opting instead for a longer campaign. The wise decision to hold the vote on September 10th would allow the time required for potential leaders to enter the race, organize their campaigns, sell memberships and introduce themselves to the membership.

The question is, "What will happen in the interval?" In the United States, the Republican Party may blow itself up. The same fate could await the Conservative Party of Canada.

Email ThisBlogThis!Share to TwitterShare to FacebookShare to Pinterest
Labels: The Fate Of The Conservative Party

Two of the PM’s mention in this piece that I remember, weren’t anything of great, wonderful leaders either. Anyong

That's why they've been wandering in the desert, Anyong.

A party in search of its soul, Owen, is how I regard the current leadership contest. The dark angels seem in the ascendant, don't they?

These are nasty people in search of a target, Lorne. In fact, they have several targets in their sights.

Clark wasn't PM long enough to accomplish anything. Mulroney was a mixed bag - on one hand taking principled stands against apartheid and for the environment, on the other taking bribes and setting Canada on the path of neoliberalism that led to the social inequality fueling the rise of fascism.

Harper did more to destroy this country's good governance than any other PM. Since leaving office, he pals around with the likes of Victor Orban as head of the Int'l Democratic Union, an organization helping far right parties get elected.

She spelled both greedy and duplicitous Muldoon authoritarian and slittery Steve wrong.

I agree, Cap. There are good reasons why Canadians have allowed the Conservatives to wander in the desert.

The basic problem behind the Conservatives' failure to achieve government, rumley, is who they are.

Le Breton has been a Conservative all her life, eh? Not quite. Her first forty years was as a PROGRESSIVE Conservative, a distinction this nitwit Le Breton seems incapable of recognizing. Bwian was such a good guy -- too bad the PM's job was an underpaid position requiring regular salary top-ups delivered in paper bags. Yup, the man had his ethics straight all right.

The rest of her whinging shows how tiny overloaded minds work. Praising harper as intelligent and disciplined as he demolished Canada and brought in illegal legislation struck down by the SCC shows her brain is dysfunctional at best.

Con wackadoodles are prowling the land. Poilievre is mixed up with white supremacist Diagolon, and the freedumb convoy dingleberry proto-fascists who have purloined our flag and demanded they run the country instead of our elected MPs need to get a comeuppance. If that actually happens -- I know their defence already because I force myself, in know thy enemy mode, to read some of their nonsense online to see where their excuses for heads are at -- they will call the Liberals and NDP progressives Fascists for opposing them!

It's a common theme of international diplomacy to accuse your enemies of doing exactly what you're doing. Beat 'em to the punch and hope to confuse the masses.

The deplorables portray themselves as just pore li'l white guys and gals being harassed by a police state promoting immigration, and all the implied baggage they nudge, nudge, wink, wink mean by that term -- what good normal people call outright racism. Count on that defence of labelling Trudeau a fascist. UnCanadian twerps like Poilievre the weasel will repeat it as gospel, sneering in his whiny insulting way, because the man is opportunist garbage, no more, no less. The extent of the lunacy these people have talked themselves into believing is beyond amazing.

Read the latest Chris Hedges. He nails the "Christian" fascist brigade in the US and their bought and paid for SCOTUS, and feels they have de facto already taken over DOWN there. Because progressives sat on their hands and hoped it would all go away and in the spirit of free speech, allowed the extreme right a platform in universities and everywhere. Quite scary to contemplate, but the facts are laid out in his commentary.

Most Conservatives are unwilling to admit that they went off the rails decades ago, Bill.