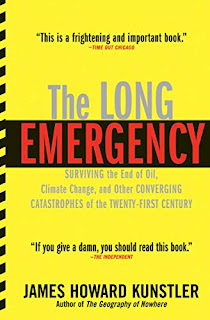 In 2005 Kunstler, famous for his critique of suburbia, noted that civilization’s energy appetites were unsustainable given the declining quality of fossil fuels left in the world.

“We can be certain that the price and supplies of fossil fuels will suffer disruptions in the period ahead that I am calling the Long Emergency,” advised Kunstler. “No combination of alternative energies will permit us to continue living the way we do, or even close to it.”

The elephant in the room is the rising cost of all fossil fuels.

There is a sustained effort on the part of some to ignore the elephant:

The experts mostly blame the pandemic, unsettled supply chains and great surges in demand. Don’t worry, the authorities tell us, all of this is temporary and transient.

At the same time political insurrectionists, who now proliferate like rodents in our whack-a-mole culture, have blamed everything from government deficits to carbon taxes for inflation. They do so even though inflation has appeared in jurisdictions with no deficits and no carbon taxes.

Pierre Poilievre, for instance, has famously accused the Bank of Canada for Canada’s 30-year high inflation rate. On Twitter the demagogue and wannabe prime minister claims that “money printing deficits” have “bid up the price of goods.”

But, clearly, the cost of energy is at the root of the problem:

Since April 2020 the cost of oil has climbed five-fold. The price of coal, the cheapest of fossil fuels, has hit new highs by nearly 150 per cent. Methane, which powers much electrical generation, has also hit new global highs. Diesel, the fuel which moves transport trucks, tractors and heavy machinery, has gone through the roof.

Whenever the price of those fuels rises, so too does the cost of food, housing, clothing and transportation, renewables and electric cars.

Art Berman has repeatedly underscored the basics: “Energy is the economy. Money is a call on energy. Debt is a lien on future energy.”

Lots of economists have given us a different explanation:

For decades now economists have mostly preached a different gospel. Their models pretend that money, labour or technology make the world go around. But this profession largely has been ignorant of the central role that energy plays in the rise and fall of civilizations. Whatever the economists might say, physical reality still rules. Growth doesn’t happen unless the per capita energy spending of fossil fuels increases. Period.

As the oil shocks of the 1970s ably demonstrated, higher oil prices primarily drive inflation. In April, for example, the U.S. inflation rate fell from 8.5 per cent to 8.3 per cent when the world price of oil dropped a bit from US$108 to US$101.

The rising costs of fossil fuels illustrates both the fragility and interdependence of a high energy spending civilization. When China started using more methane for power generation last year, the price of liquified natural gas started to climb. As methane prices escalated, many countries returned to coal because it’s a cheaper energy source.

When Europe thought it could retire nuclear energy with renewables and become dependent on Russian oil and gas with no problems, reality intervened. When the winds didn’t blow on the continent, there were widespread natural gas shortages as countries scrambled to make up for wind energy shortages. The U.S. then exported more fracked gas to Europe, but that caused prices to rise in North America. Then the price of diesel started to climb because refineries use methane to produce hydrogen in order to remove sulfur from diesel. Fossil fuels are the house that Jack built.

Let’s now add to this crazy picture years of underinvestment in oil and gas exploration primarily due to excessive multibillion-dollar losses from fracking (industry flooded the market and drove down the price below the cost of extraction) along with dubious claims about the energy transition. Scarcity is now an issue.

Meanwhile rising oil prices affect the cost of dinner, directly and indirectly. Whenever the price of diesel goes wild so too does the cost of our food, much of which travels far to our pantries. As the energy ecologist Vaclav Smil has calculated it takes the energy equivalents of five cups of diesel fuel (from fertilizers to herbicides to transportation) to put one kilogram of imported tomatoes on the table.

In fact we live in a wasteful civilization that thinks it is entirely acceptable to burn 10 calories of mostly fossil fuels to make one calorie of food, and all by employing fewer than one per cent of the population. Prior to the colonization of farming by fossil fuels, agriculture was local, small, low energy (employing human or animal muscle), inefficient and nutritious. Now it is global, big, high energy, efficient and tasteless.

The inflationary problem doesn’t stop with food. Most people, for example, still don’t understand that one barrel of oil does the equivalent work of 4.5 years of human labour.

As a consequence current oil consumption equals the employment of 500 billion fossil fuel “energy slaves” in our economy. This vast disruptive army has enabled the level of global consumption responsible for the relentless poisoning of oceans, the degradation of forests, the depletion of fisheries, the erosion of soils, the disruption of nutrient cycles and the destabilization of the climate.

Yet we continue to march to the abyss, refusing to change.

Email ThisBlogThis!Share to TwitterShare to FacebookShare to Pinterest
Labels: Fossil Fuels Are The Root Problem

We were really poor at self evaluation and the consequences of our actions weren't we?
Self centered , selfish and greedy were top of the list as human traits
and they were always considered peripheral and the attributes of "the others"

Perhaps, UU. But oil has bedeviled us for quite a while now.

When it comes to objectively looking at our own behaviour, lungta, we've always had a hard time.

Hate to be repetitive on the matter.. but what the hey eh !

In Canada.. we have tons of ‘ethical oil’
this myth is faithfully promoted endlessly
but here we go again.. yes ‘folks’ reality is disturbing
but for those watching the Beverly Hillbillies here it is

Canada’s ‘vast oil reserves’ are actually Tar Sands Bitumen - over 95% ..
After extraction, primarily via ‘in situ’ steaming
the Bitumen is ‘cleaned up somewhat’
then it’s diluted via Condensate approx 1/3 & is called Dilbit
a slurry resembling wet concrete mix and heated, pressurized
and shipped via pipeline to refineries capable of ‘cracking’

At that point, much of the inherent sulphur is ‘cracked’ out
perhaps this is where it becomes ‘ethical’ perhaps not ?
Canada is very short on refineries that can ‘crack’ it
hence most goes to Washington State, California
or the Houston area - Gulf Coast
where it competes with Venezuelan Dilbit
a higher grade, lower sulphur non ethical ‘oil’

If shipped from Burnaby, BC via supertanker
the cargo has to clear Second Narrows shallows at high tide
and can only be 1/2 to 2/3rds full

Th the.. that’s it folks.. !
That is ‘Canada’s Vast ‘Oil’ Reserves’ - Bitumen,
not oil.. it’s a synthetic mix.. slurry
and the condensate is of more value than the Bitumen
it’s extracted first, and priced hourly

The YouTube clip I brought up doesn't have much to do with oil, sal. Have I missed something?

In the other part of this article the author looks at our perilous addiction to growth. He endorses Lovelock's concept of "sustainable retreat." A way of life much more in line with our experience in the 50s and 60s, well before we crossed into overshoot.

Think of this as Thatcher's Curse. She killed off Keynes to make way for Hayek and Friedman. Perpetual exponential growth became and remains the order of the day. Find me a leader in Parliament who is not a disciple of growth.

A terrific clip, Mound. We're growing ourselves to death.

As our Western aspirations die on the vine only to be replaced by Asian ,look alike, ones we would seem to have no future.
Emerging Asia is competing for the worlds dwindling resources , and with some success.
That Elon Musk asks for more for less is indicative of our, western, declining influence on the world.

We are entering a fight to the death battle of the survival of the fittest , Darwinian ism at it most efficient..

Musk is a technocrat, TB. But he's not a smart man.

Should be a Government Of Canada link.. not Youtube.. not a video
Apologies..
It may seem ‘picky’ but I don’t favour misconception much at all
or excuse sloppy / lazy ‘journalism’ - much less ‘echo chamber’
Alberta Bitumen is what it is.. as is Venezuelan Bitumen

Thanks, sal. The first step toward progress is the ability to tell the truth -- and that begins with getting the names right.