Something's Out Of Joint 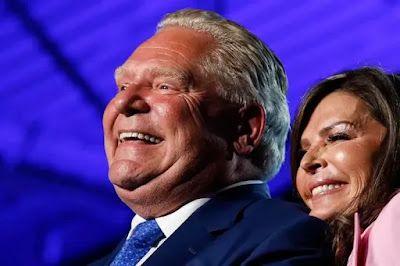 Ontarians have given Doug Ford four more years. He and his party won 83 seats in the province's 124-seat legislature. I'm not surprised. The polls predicted this outcome at the beginning of the campaign.

But I am disappointed. The Dippers and the Liberals received roughly the same proportions of the popular vote. In fact, the Liberals did a tad better than the Dippers -- 23.9% to 23.7%. But the Dippers captured 31 seats, while the Liberals won 8 -- once again, not enough for official party status.

Something's out of joint.

Of course it's out of joint, Owen, the cons like it this way as long as you can get a majority with a minority of the vote it will never change. This election was blown when the egos of the NDP and Libs refused to even consider cooperating was made known to the voters.

The answer as you know is Proportional voting. But DoFo doesn't understand it and definitely doesn't want it - he is laughing all the way to the Bank.

I lived in Ontario (and was incredulous) when Mike Harris won his second majority.

I suspect that the buyer's remorse on this chimera may kick-in soon and mirror what happened back then.

In the meantime, yet another indication that humans will not meet and survive their existential challenge, rather humans are rebelling against the future but the future always wins

All the way to the bank, Ben. And several others are cashing in with him.

We really don't seem smart enough to save ourselves, PoV.

Voter turnout was even worse than reported above. Elections Ontario has it at 43%. If you couldn't be bothered to vote, then don't complain.

The worst possible solution
Gives me no hope for Alberta even with the mental midget gone
Or Trumpistan 2024
Meanwhile my prairie town is cutting down trees to reduce leaf clean-up, paving over green space, and revving up the continuous fed water park, in the drought while charging residents for every drop of water.
But we are blue boxing which means our recycling is shipped at 4 times the cost to be sorted and buried in a different dump.
hint: tins and glass cause no eco damage, burring paper is carbon sequester and plastic is 1/2 price new
Our recycling program is the 21 century answer to "Duck and Cover" ... all feel good ...does no good.

We get the government we deserve, UU.

If there's a way to screw things up, lungta, we'll find it.

No surprise, Owen. Ford wasn't facing much competition. Del Duca couldn't even hold a seat in Vaughan, losing in 2018 and again this time. As for Horvath, there ought to be a three strikes and you're out rule. Having her lead a fourth campaign was a recipe for yet another NDP failure. I'm glad to see both of them go. If this is the best the Libs and NDP have to offer, you're right, something's out of joint.

It's not just the program that wins elections, Cap. It's who leads all the parties.

"If you couldn't be bothered to vote, then don't complain." @ UU

Just what do you do if you don't want any of the candidates or their parties? There is no None of the Above option. When more than half of eligible voters do not vote it signals that something is badly broken.

The riding I'm in always elects a Conservative. All contrary votes are wasted. Gerrymandering is alive and well in Canada.

didn't see much of the Ontario election here in B.C. but I knew Ford would be winning going into the election. The leaders of the two other major parties just weren't visible or had a message to sell. If they did, it would have been all over the news. We got more coverage on what was going on in Alberta with Jason.

With only 43% of Ontario voting no one gets to complain, except those 43%. If a party leader can't get their supporters out to vote, its time for a new group to come in.

Proportional Representation would make every vote count, Toby. But it is not in the interest of those who win elections.

And, in the case of the Liberals and the NDP, that's exactly what's going to happen, e.a.f.