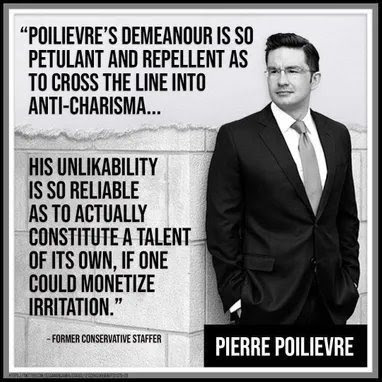 At the moment,  if Pierre Polievre becomes the leader of the Conservative Party his future looks clouded. Robin Sears writes:

Poilievre will likely fall victim to the torment faced by the last two leaders. There’s managing a political base whose views are in sharp contradiction to those of a vast majority of Canadians, with an inability to pivot to positions that are not repulsive to that majority. He’ll also be inheriting a party and caucus irretrievably divided on core issues.

There are three obvious flashpoints: guns, climate and COVID. Most Canadians want our epidemic of handgun violence brought under control. Poilievre will not say how he will do so, as his base is vehemently opposed to any limits on their freedom to own a dozen assault-style weapons if they so choose.

Conservatives around the world have fallen into the trap of framing the fight against climate change as a left-wing conspiracy, none more hysterically than peculiar Pierre. There is no pivot for him here, either. As fires rage this summer and floods drown dozens of communities this fall, he will be left high and dry politically.

Nor will he be able to slough off his COVID baggage, as the public health challenges continue. From his vaccine blarney, to his flirtation with insurrectionary truckers, to his sneers at the public health measures that saved thousands of Canadians from death, Poilievre will drag behind him a very heavy COVID ball and chain, one that his opponents — inside the party and out — will be sure to keep a spotlight on.

His most serious weakness in securing the confidence of Canadians, perhaps, is that he will not have the support of at least a third of his own party on day one. Whether it is Brian Mulroney, Patrick Brown, Michael Chong, Rona Ambrose or Lisa Raitt, the list is long of party elders who will express their sorrow — and anger — at the political dead end that Poilievre seems to be dragging their party into.

So Poilievre may, indeed, meet the same fate as Andrew Scheer and Erin O'Toole. But there is another possibility:

This week, polling firm Abacus found that seven out of 10 Poilievre supporters are at least open to the idea Davos elites may have a “secretive strategy to impose their vision on the world.” And more than a third are open to the statement “Bill Gates has been using microchips to track people and affect their behaviour.” Sadly, the numbers for all of Canada aren’t that much lower on these conspiracies.

So it may be easier to ride a Trumpian tidal wave of anger to political success in Canada than most of us thought. One may hope that Poilievre’s leadership opponents do a better job of exposing this would-be emperor’s nakedness, and that the Liberals and New Democrats pound him with their biggest guns relentlessly.

Poilievre may yet become the Trump of the North.

I don't understand how people can be so stupid as to believe these conspiracy theories. Is it lack of education? People are unable to think and reason? Maybe people have always been like this and the internet is just bringing these people out. For sure the internet has shown that many many people cannot spell the simplest of words, like "too", and many cannot formulate basic sentences correctly. The ignorance is so sad.

Unfortunately, Gordie, I suspect that much of it is willful ignorance.


9 out of 10 conspiracy theorists
also agree peepee pawliver is
Backpfeifengesicht regardless.

I'd suggest the biggest issue which will keep Pierre in opposition is the anti abortion decision coming out of the U.S.A.'s Supreme Court. Many of us just don't trust the Conservatives when it comes the right to control your own body.


Pierre's association last time with the rioters in Ottawa will cost him. the rioters are going for a round two this summer. The City of Ottawa will just love that and keep thousands of tourists out of the city.

Pierre is like the Canadian version of trump, in training.

I agree, e.a.f. And, like Trump, you can't believe a word that comes out of his mouth.