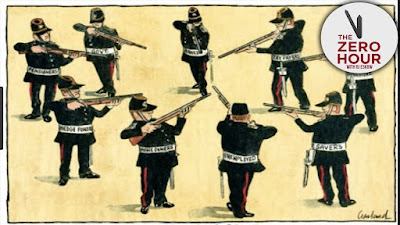 Doug Ford won the election because progressives couldn't get their acts together. Alex Ballingall writes:

For left-wing Ontarians, the despair — and frustration — is real. The premier they accuse of callous cuts and pandemic failures dominated the provincial election on Thursday and returned to power with an even stronger majority government.

The fact that, of the minority of people who bothered to vote, most cast ballots for left-leaning parties opposing Doug Ford’s Progressive Conservatives — that’s just salt in the wound.

“I mean, it’s pretty bad, right? In a lot of ways,” says Christo Aivalis, a partisan New Democrat in Kingston who analyzes politics through a leftist lens on his YouTube channel.

Despite Ford’s commanding victory, Aivalis looks at the election results and sees a majority who wanted a different direction. Almost 54 per cent of ballots were cast for the NDP, Liberals and Greens, versus 41 per cent for Ford’s PCs. Yet none of the more progressive parties could translate that into power. Nor could they reduce the PCs to a minority at Queen’s Park, or even inspire many people to get to the polls. Elections Ontario pegged voter turnout at 43 per cent — the lowest ever.

Progressives spent a lot of time fighting each other:

With similar platforms and campaigns that tried to convince voters to replace Ford’s PC government, the three parties split a majority of votes, making it easier for PCs to get a plurality of ballots in many ridings, said Cameron Anderson, a political science professor at Western University in London, Ont. He compared the situation to the 1990s and early 2000s, when the Canadian Alliance and federal Progressive Conservatives competed for votes on the right side of the political spectrum.

And the first past the post system made the split between them even worse:

Under that system, Ontarians elect MPPs based on who gets the most votes in a given riding. Some argue this is less democratic because it can produce disproportional results when support is relatively low but uniform across the province, such as when the Liberals got 24 per cent of all votes but only elected eight MPPs, or 6.5 per cent of seats at Queen’s Park.

But, most of all, Ontarians weren't in the mood for change:

The lack of a strong appetite for change meant voters didn’t congregate around a single party seen as having the best chance to dethrone Ford, said Lyle, referring to the “strategic voting” that is often discussed among progressive voters keen to defeat a right-leaning alternative.

[Greg]Lyle noted progressive voters “aren’t united in their values,” and that there is a split between those who want government to focus on redistributing wealth and those who want to emphasize economic growth. This makes it difficult to unite people who would never vote for a conservative party, even if that broad group represents the majority of voters, he said.

Ford will interpret his win as a juggernaut. As he did the last time around, he'll come in and, in his first year, he'll do a lot of damage.

Another election lost to FPTP and dismal turnout. We're about to test the truth of Mencken's aphorism that "Democracy is the theory that the common people know what they want, and deserve to get it good and hard."

No one should be considered elected with such a feeble plurality. When half the electorate fails to show up at the polls, we should perhaps nullify to vote and call another, perhaps instituting a reverse poll tax for those who don't show up, and continue doing so until there is a clear preference distinguished by a large majority of the eligible electors. Or we could have a go at PropRep, but, one way or another, it likely behooves us to ensure that voters have good information on which to base decisions, like making John Restakis' Civilizing The State required reading.

As I get older, Cap, I get more sympathetic to Menken's estimate of human potential.

We are drowning in information these days, Danneau. Unfortunately, reliable information is getting harder and harder to find.

I voted, as I have in every election since I became of age, Owen. While I am unhappy with the result, I really can't blame anyone but the almost 60% who turned their backs on this most basic mechanism of democracy, casting a vote.

One of our sons lives in China, Lorne. He says it's a place where there are "lots of rules but no reasons." It's so easy to lose what we have -- and we do not appreciate that fact.

He'll do SO MUCH damage. I'm not sure I'm up for this again, but other provinces aren't fairing much better!

I fear that the near future won't be easy for teachers, Marie. I hope it won't be a replay of the Harris years when John Snoblen was the Minister of Education.

Isn’t the dumbing down of the public, the aim of todays Conservatives? Anyong

It's easier to appeal to the ignorant, Anyong.