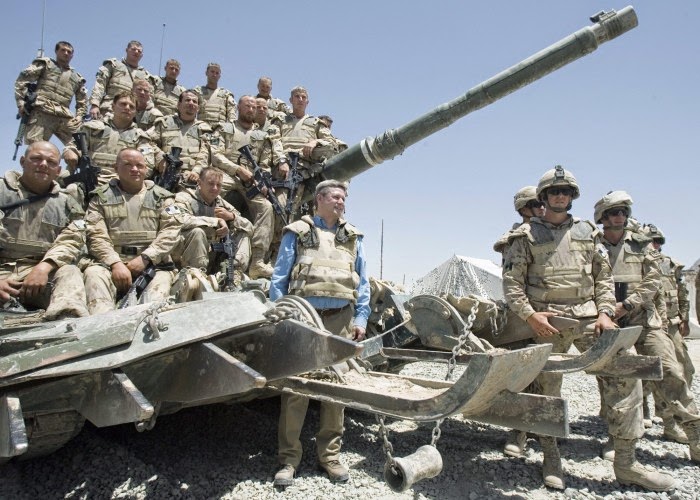 Linda McQuaig writes that there is no better contrast between what the Conservative Party used to stand for and what it stands for now than the contrast between Douglas Roche and Stephen Harper. Roche represented Edmonton between 1972 and 1984. He was appointed to the Senate in 1998. He retired from the Senate in 2004.  Throughout his career, he has been a tireless advocate for nuclear disarmament:

Roche has spent decades championing nuclear disarmament, peace and social justice — causes that have fallen by the wayside in our current rush to celebrate greed and cheer on military intervention.

Launching his twenty-first book this week, Roche is a striking reminder of the gulf between the old Progressive Conservative Party that, at its best, found room for truly public-spirited individuals, and Stephen Harper’s soulless new version.


He believes, quite simply, that war has become an outmoded method for solving disputes:

Gentlemen no longer duel, for instance. But for centuries they did. As Alexander Hamilton prepared for his famous 1804 duel with U.S. vice-president Aaron Burr, he wrote in his diary that he strongly disapproved of duelling but felt obliged to participate because people would look down on him otherwise.

The lack of duelling today doesn’t mean that humans have evolved into more sensitive beings — just that society regards duelling as unacceptable and outdated. Aggression is now channeled into contemporary practices like corporate takeovers or derivatives .


But Mr. Harper is still addicted to the old way of doing things:

Under Harper, Ottawa has shown an enthusiasm for the institution of war, making something of a fetish out of celebrating Canada’s war history, pumping up our military spending and no longer even feigning an appreciation of peace. Our troop contributions to UN peacekeeping missions, already on the decline under the Liberals, have plummeted to 53rd in the world, in between Paraguay and Slovakia.

Harper's 'legacy' will likely be long-lasting, Owen. His ascension was aided and abetted by many who betrayed the old Conservative Party's principles, not the least of whom was Peter MacKay, the same MacKay who many believe has leadership aspirations of the debased party that he helped to create.

Elmer's boy sold out the party his father stood by, Lorne. In fact, the whole Harper saga is a story of betrayal.

I am one who is really angry with MacKay, for permitting that dictator Harper to run this country. Harper is no Conservative, what-so-ever.

Why did we go to war Mr MacKay? Canadians detest Fascists, Dictatorships and Communism.

MacKay has let Canada and Canadians down, very, very badly. Harper has cowed MacKay and all of the Ministers. None of them have the courage to stand-up, against their monster leader Harper.

Quite true, Anon. MacKay has a lot to answer for.