An Ugly Blast From The Past 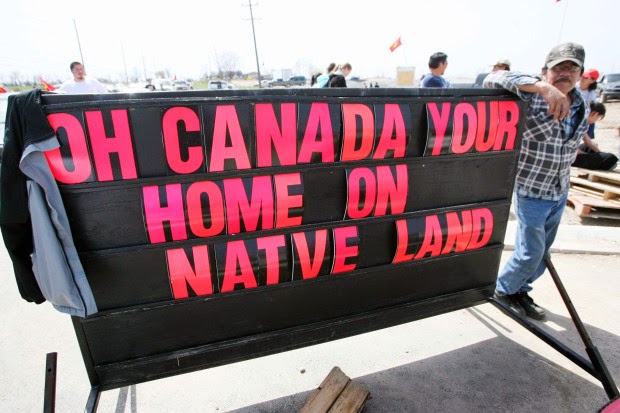 It's not news to note that the Harper government is fixated on the past. From dropping the word "progressive" from the party's moniker to building a resource based economy -- with the focus on one resource -- the Harperites are detemined  to make the clock run backwards. And the "Fair" Elections Act is part of that agenda. Paul Adams writes that, when Canada was founded, the franchise was not available to everyone:

The process has been much more herky-jerky than that.

Two years after women got the vote, Parliament re-affirmed that aboriginal people, including Inuit, could not participate in elections. Nor could minorities such as Chinese, Japanese or Hindus vote federally in places such as British Columbia and Saskatchewan where they were barred from voting provincially.


Canada's first inhabitants have been overlooked since we -- the Europeans -- arrived.  Pierre Poilievre proposes to continue that policy:

As First Nations leaders have pointed out, many people living on reserves don’t have driver’s licences or even bank accounts. Interestingly, ‘status ’ — the core identification document on reserves — have a photograph but not the required by the proposed bill. Moreover, these cards expire and may be difficult to renew.

We know that aboriginal people rely on the vouching provisions of the current law to a far greater degree than other Canadians for precisely those reasons.

Lurking not far beneath the suggestion that most Canadians think it is reasonable for voters to have ID in their pockets on election day is the sense that only the “deserving” — the upright, respectable citizens — should be participating in our democracy.


There is racism just below the surface of the "Fair" Elections Act. This is the government which tore up the Kelowna Accord and treated Chief Theresa Spence with contempt.

Without a doubt, the Harperites are an ugly blast from the past.

Harper has brought over, thousands and thousands of foreigners. The Chinese are, literally pouring into BC.

Foreigners can have drivers licenses and health care cards. That does not mean, they are Canadian citizens.

Harper is using every underhanded tactic, to stay in power. Ugly blast of the past, no-where near describes Harper's vile blast of to-day.

He may be an ugly blast from the past, Anon. But his goal is to radically remake the future so that it looks like yesterday.

ONTARIO = S.BRANT, Caledonia +
we don't back down.

...and the only shame they know is that the home team lost.

Oh, and that cats need 'we'll take your money' night's too.
What a cause for a women in her
station in life- at present.

I know a cause or two she could have picked, but hey!- I'm a dirty
eff'ing liberal hippy- so go away right?

I have words Owen, which I shall
refrain from using here.

My dog hears all my speeches, and broadcasts. :)

Here is something Harper should be scared of, he may be able to stop them from voting but in BC the First Nations have never ceded their lands to the crown and are not treaty Indians therefore still freeholders of all the land in their possession surface and sub-surface. Read how one Chief made the BC Liberals back down and about face:

It's the First Nations who will put an end to Harper's pipe dreams about pipelines, Mogs.

And they wonder why they can't get any traction in the native community, Loving It.

It's because your dog listens better than they do.