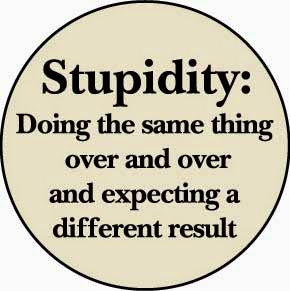 In at least one way, Stephen Harper is absolutely consistent: He is the author of his own misery. That was apparent in 2008, when he almost brought his government down by removing public funding for political parties. It was apparent again last week when the Supreme Court reminded Harper that, if he wanted to reform the Senate, he would have to play by constitutional rules.

And, Robert Asselin writes, it was apparent when Barack Obama decided to delay approval of the Keystone Pipeline. Harper has only himself to blame:

Back in November 2008, President-elect Obama issued a statement: “Few challenges facing America — and the world — are more urgent than combating. Many of you are working to confront this challenge … but too often, Washington has failed to show the same kind of leadership. That will change when I take office.”


Obama sent a signal from the beginning of his administration that climate change would be on his agenda. But Harper isn't good at picking up on signals from other people:

Knowing the oilsands were a tough sale for the Obama administration because of their obvious environmental footprint, what did the Harper government to make Keystone acceptable?

Not much. The Harper government came to the table with no real substantive offering. After eight years in office, Harper still hasn’t put forward meaningful greenhouse gas emission regulations or policies that would make Canada a world leader in research, clean technologies and energy innovation. Instead, his government bought massive ads in D.C. subway stations to argue Canada is a stable, friendly country that has a lot of oil to .

Prime Minister Harper’s approach to selling the Obama administration on Keystone amounts to this: We have a lot of oil, so do yourself a favour and take it. And if you don’t take ours, you’ll be stuck with Venezuela, Saudi Arabia, Russia and a lot of unstable countries.

The prime minister, in effect, told  Obama that -- when it came to energy --  Canada was in the driver's seat. He did not foresee that the Americans would look for new sources of energy within their own borders. And he did not foresee the enormous backlash against Keystone within those borders.

Foresight isn't one of Harper's strengths. He didn't foresee the financial meltdown of 2008. His spin machine likes to trumpet the message  that one of his strengths is standing by his principles. But perhaps it has nothing to do with principles.

Email ThisBlogThis!Share to TwitterShare to FacebookShare to Pinterest
Labels: Harper Is His Own Worst Enemy

Stupidity and absolute blind ambition, an ambition formed in isolation of reality. It does demonstrate the power of the message though Owen, so far nobody has been able to break down this carefully constructed facade. A question that all Canadians should be asking themselves, does this man and his cabinet have my best interests in mind when they form policy and draft legislation? If the answer is yes, then we truly are in serious trouble.

Harper continues to sell the notion that "the vast majority of Canadians" agree with him, waterboy. He said so again on Friday in his reaction to the Supreme Court decision.

Polls -- and elections -- prove that notion is patently absurd. But Harper keeps making the same pitch.

>."Insanity: doing the same thing over and over again and expecting different results."< -Einstein -is the real quote, you were obviously being nice Owen!

Speaking stupidity I wonder how the 'Harper machination machine' in the PMO will respond to rising criticism of the "Fair Elections Act"? Stupidity dictates and councils (sounds PMOish)to go full steam ahead and not listen to your critics.

The new open letter condemning the bill with even more pedigreed signatories.

I was aware of the source, Mogs. But, in this case, the change seemed to fit. Sometimes insanity is a choice -- a stupid choice.

Past performance is a good predictor of future performance, Mogs. I'm not expecting that the way these people respond to their critics will change.

This is what happens, Owen, when you surround yourself with obsequious courtiers who simply reinforce your distorted worldview. And with the aid of the powerful Harper propaganda machine, this is what is consistently being foisted upon a public that often vigorously resists thinking for itself.

The Harperites response to all criticisms of their actions amounts to "oh yeah,well screw you".

Harper himself is right on the edge of saying that to the White House. He's already said it to the UN and the EU.

The people of Canada, by and large, don't seem to mind all that much.

The rest of the world...too soon to say.

Sometimes I think stupidity is viral, Lorne, and -- like the flu -- it can be terminal.

It would appear that the majority of Canadians don't mind being screwed, Dana -- a truly sad state of affairs.

"It would appear that the majority of Canadians don't mind being screwed . . . "

Oh, they mind all right, they just don't believe that they can do anything about it. The cynicism about our political system is rampant. It looks like the majority of Canadians have given up on our political system and are doing their best to ignore it. Consequently our political systems are dominated by old geezers who are stuck in the Cold War era and fanatics who sell their souls to the Market.

I just hope that "Stupidity- Doing the same thing over and expecting a different result" is not the result for the next election. I do sometimes worry though.

Harper is far too arrogant and stubborn to listen to anyone. Harper's Ministers did not want Soudas brought in, Harper insisted.

At meetings of Nations, Harper always manages to anger and insult every countries leaders. They detest Harper's bullying and his hissy fits, when he doesn't get his own way.

What amazes me? Harper's Ministers support him. Their stupidity boggles me.

It's a situation which is ripe for exploitation, Toby. The people who believe that selfishness is a virtue are having the time of their lives.

If we arrive at the same result after the next election, Isne, we're not just stupid. We're insane.

It's remarkable, Anon, that a man who has a talent for infuriating so many people has managed to stay where he is.

Polite, centrist people who don't know what their core principles are and who are concerned about what the neighbours might think will always get screwed.

Not always, Dana. But when they face someone like Harper -- who is hellbent on vengeance -- they will always be played for fools.