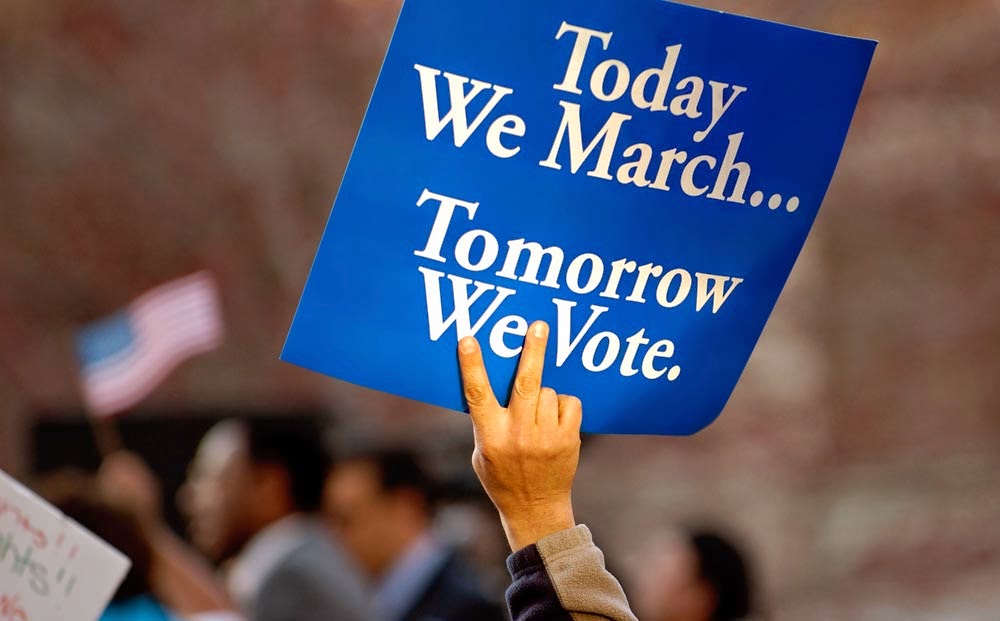 Pierre Polivevre has met all criticism of the "Fair" Elections Act with a mantra of talking points and -- in the case of Marc Mayrand and Sheila Fraser -- ad hominem attacks. It's all been rather depressing. But, Murray Dobbin writes, those very tactics present opponents of the government with a real opportunity.

The bill copies Republican attempts to suppress large segments of the voting population. But those attempts backfired:

In at least some cases efforts at voter suppression in the U.S. have backfired because the attack on black and Latino communities has galvanized them to get out the vote. The government of Florida reduced the early voting period which prompted black churches "to conduct a two-day 'souls to the polls' marathon. And even as election day turned into a late election night, and with the race in Ohio, and thus for the 270 votes needed to win the presidency, called by 11 p.m., black voters remained in line in Miami-Dade and Broward, two heavily Democrat counties in Florida, where black voters broke turnout records even compared to 2008."

Efforts to suppress the vote in civic elections in North Carolina and Texas also backfired, resulting in record turn-outs of the people targeted by Republican party controlled board of elections.

Barack Obama was re-elected because his political machine targeted the very voters the Republicans tried to disenfranchise. Not being allowed to vote gave them a reason to vote. Dobbin is right:

While many in those communities have found little reason to go to the polls given the slim likelihood of any change in their lives, no one likes to be told what they can and can't do -- especially when it comes to rights. For the people targeted by Harper for disenfranchisement, the 2015 election could be purely about democracy itself.

It's time for the opposition to mobilize voters.

I have to admit, Owen, that I woke up this morning feeling depressed, a mood no doubt caused by that sad spectacle yesterday during the committee hearings. I said to my wife that the kinds of attacks being launched against people like Maynard and Fraser may befit the demagoguery of banana republics, but certainly not the Canada we know and love.

Paul Adams, over at ipolitics, has a piece this morning on how Poilievre has dealt with his opposition, Lorne. He treats them as he would treat opponents who were running for the campus Conservative club.

These folks are self absorbed children. Mayrand and Fraser are the adults.

This may be one of those situations where "give them enough rope" has finally come to fruition. We in the blogisphere must continue to make sure that the voters know of their disdain for democracy as hard as it is at times to keep up with the crap they spread.

They remain convinced that they can get away with this, Rural. But the signs of rebellion are sprouting up like dandelions -- Soudas-Adams, the Nadon decision, restive backbenchers.

At some point they will implode.

As I've said before I do think Stephen is desperate and desperate people do dumb things I hope he alienates enough of the con party to have an open revolt. I am also surprised how few people are informed about the 'un-fair elections act.' My neighbour being one of them if I mention anything about the Harper-cons, his reply; "Leave them alone they are doing a good job on the economy."

What ever brand of brainwashing detergent the harper-cons use is having a debilitating effect on my fellow Canadians. Scary to think such a deceitful government that is at war with its citizens actually has supporters among us.

I'm sure there were many conversations just like this one in a country across the water a little under a hundred years ago.

Pierre Polievre reminds me every time I see him how much danger Canada is in.

If you're unfamiliar with the writings of Milton Mayer you ought to remedy that.

I am disgusted with the opposition too. They have done nothing regarding, Harper bringing over thousands and thousands of foreigners taking our jobs.

If the opposition can't stop our Crime Minister and his henchman Poilievre from destroying our democracy, the country and the people? Then, they are not fit to govern either.

I was wondering when this was coming, I know Ezra has ties to the Koch brothers and he is a fanatic. I hope this goes somewhere.

This isn't new, Dana. It's as old as tyranny itself. Thanks for the link.

They can only succeed if we let them succeed, Mogs. So far, there are still a lot of Canadians who support them.

It's time for the opposition to prove that they are worth our support, Anon.

I came across to BC in 2007, obtained citizenship in 2012 and I have to say it is not the Canada I thought I was coming to.
I know it hasn't always been this way and that the curse of Harper and his cronies are mostly to blame. Banana republic sums it up well as to where we are heading with him.
Like Lorne, there are some days I wake up quite depressed, and others when I'm both frustrated and angry.
Angry not just at what I see happening but also angry at the apathy I see around me, something Mogs also mentioned.
I feel like going around yelling at people to open their eyes, wake up, can't you see what's going on? The death of good journalism doesn't help and the general populace seem to take all they read at face value instead of doing a little digging for themselves, you don't have to go very deep as you all know. It doesn't take long to see how dangerous Harper has become, and that the only thing that matters to him is Harper himself and staying in power. The trip to Israel, the really foolish sabre rattling in the Ukraine come to mind recently.
I sincerely hope Rural is right and that there is "enough rope", and that the cons will burn themselves up from within.
I think I share the same seal as Mogs, David Wilks. A man with an RCMP background who meekly toed the line over the "misspoke" incident in the commons a couple of weeks back. I wonder how many people he arrested and then let go, with a pat on the back, after they had come clean. Has he no conscience, he should be all over this like a rash. Is it worth my time to see him, or even write to him? I sometimes wonder.
Anyway, my apologies for rambling on a bit, I know the folks here probably feel the same way. The blogs I visit on a daily basis are what keep me going, at least I feel there are others who are trying to make it right. I would just like to live in the Canada I thought I was coming to.

Like you, Inse, lots of us remember a very different Canada. The lesson is that a lot of damage can be done by one man -- if you let him become the chief chef.

The sooner we send that one man back to his own kitchen, the sooner we can begin to repair the damage he has done.

I used to be thankful, Owen, for how far we'd come since being ruled by Kings and Judges. Then Harper and Toews magically appear- and Canadians don't mind! In fact the Con numbers are going up and people only care about their own stake. Speaks volumes. What a nation it's become, eh?

It's what happens, Loving It, when people decide that selfishness is a virtue.

Owen, having re-read your post, I should have said I agree that motivation to get out the vote-
takes many forms, and all our different voices are required.
Some days I do agree with Dana, though I once said that was defeatism, for which I'm sorry.
I'm pretty sure the people at my church vote- it's just that it's not quite a 'JimmyCarterBaptist' church, if you know what I mean?
I wear my liberal heart on my sleeve there anyway because I figure- if you're on the road less travelled- you're going the right way...

That's true, Loving It. But you have to be prepared sometimes to be all by yourself on that road.

And, once prepared to go alone-
which in itself, I think-
is the litmus test,
you meet the most beautiful friends one could imagine.
It's to surrender all that is comfortable to us- ideas, opinions, people and stuff- that
confounds so many.