Gone The Way Of History? 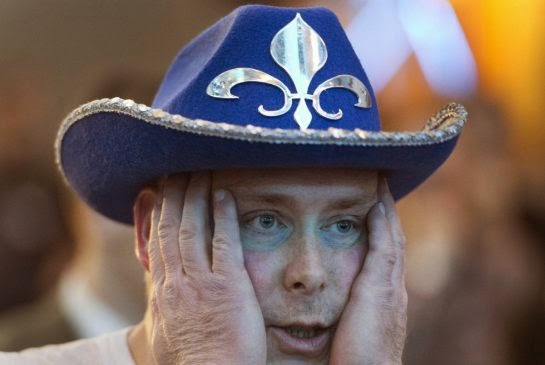 Chantal Hebert writes this morning that the Parti-Quebecois may turn out to be a one generation wonder:


One of the PQ’s worst fears has long been that it would turn out to be the party of a single generation.

Over their short time in office, Marois and her team have done much to turn that fear into a self-fulfilling prophecy.


Like the Harper Conservatives, the PQ is tone deaf:


To every message that Quebec voters were tuning out sovereignty, the PQ has essentially responded by shutting its ears to all but those who sang from its hymn book.

Over the past month, that self-imposed tone-deafness has led to a campaign of false notes, from the second-coming atmosphere that attended the recruitment of media mogul Pierre Karl Péladeau as a star candidate, to Marois’s end-of-campaign mea culpa that she spent too much time entertaining the twin notions of sovereignty and a winning referendum.


That does not mean that Quebec nationalism is dead. It raises its head with each succeeding generation. But the direction it takes is critical. With Maurice Duplessis it was inward looking and afraid of the future. With Jean Lesage's Quiet Revolution it looked out on the world and threw off the shackles of the Catholic Church.

Rene Levesque -- who began his political career in Lesage's cabinet -- pushed nationalism further to the left and insisted that his party's founding principles be social-democratic.

Trying to predict the next reincarnation is a fool's errand. For the moment, it appears that Levesque's dream  -- and Pauline Marois' premiership -- have gone the way of history.

Email ThisBlogThis!Share to TwitterShare to FacebookShare to Pinterest
Labels: The Quebec Election

One can only hope that the election results don't tempt the Harperites to play to their base by showing special contempt for Quebec from hereonin, Owen.

I wouldn't consign them just yet.

Harper has more revulsion to go and years to implement it.

Quebercers have chosen to reject another referendum, Lore. But, if the Harperites take that rejection as an indication that they can do as they please, they will have a rude awakening.

Quebecers will take to the streets before other Canadians do.

Sovereignty isn't dead. It just had the wrong people trying to sell it. With the right people such as Gilles Duceppe perhaps, we may have had something to talk about.

Last night's election is really nothing to celebrate. It is to be lamented really.

There was another alternative -- Quebec Solidaire. Sure it was sovereigntist, but if anyone looked at their platform and policies from their website and English version was available, they would've seen that a referendum would not have been terrible.

I am lamenting most of all that all rewarded a corrupt Liberal government who was endorsed by criminal Arthur Porter no less with a majority so they don't have to go to a referendum or to the polling stations for many years to come? Democracy should be embraced not something to groan about.

Sorry, that last anon comment was from me. I forgot to enter my id when I hit send.

Corruption is not new in Quebec, CK. I still remember when roads were paved in the middle of January -- if a riding was at stake.

No one should be naive about the Quebec Liberal Party. It is heartening, though, that Quebecers saw through the Marois Mirage.

Your comments are always welcome -- anonymously or signed.

I don't really think that even the Marois mirage was worth seeing the Corrupted and pro-privatization and pro-fracking Liberals getting that whopping majority. I really hoped for a minority.

I only hope Couillard does not shut down the Charbonneau Inquiry after Marois extended its' mandate.

I was turned off Marois when she recruited Pierre Karl Peladeau. I never really liked her, but no one seems to give credit where it is due.

She did cancel Charest's loan guarantee that would've kept an asbestos mine on life support.

She did remove the most hideous portions of Bill 78 and closed Gentilly 2 which sat on a land fault, thus made us at risk for what happened in Japan some years ago.

When in opposition, when Charest wanted to frack, she vehemently opposed it.

She was great with the Lac Megantic disaster. Something the Feds couldn't even muster. Nor the Quebec Liberals for that matter, despite having a Liberal MNA at the time.

That silly charter was nothing more than a distraction. Many celebrate its' death. Whatever. It doesn't remove racism here or in the rest of Canada, and we're kidding ourselves if the rest of Canada, particularly among Conservative circles, were not racist.

I am speaking as someone who is a Quebec Solidaire supporter, member and had volunteered for them a few times.

All this to say that Marois, in some ways, had better qualities than Charest or Couillard had.

Like I said in the past, what is so great about federalism anyway? The new unfair elections act will likely pass this summer when no one is paying attention. I will likely not be able to vote in the next election because of it -- I don't have a drivers' license and a neurological condition precludes me from having one.

I could go on, but you get the idea.

I understand your point, CK. After all, it was Rene Levesque -- the former Liberal -- who called the Liberal Party "the biggest whore house in the world."

What bothered me about Marois was that -- from where I sit -- she seemed to be playing wedge politics, just as Harper plays the game.

Couillard says he favours a big tent. We'll see if he is a man of his word.