Time To Shut This Show Down 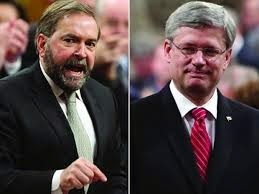 It was a remarkable display of arrogance. In yesterday's question period, Thomas Mulcair asked Stephen Harper if he would apologize for Pierre Poilivere's "cowardly and baseless attack" on Marc Mayrand. The prime minister rose, congratulated Philippe Couillard on his electoral victory and then sat down. And the barking seals honked and applauded.

It's clear that Mr. Harper believes he need not answer any questions -- from the Leader of the Opposition or any of the "self styled experts" who have criticized his so called "Fair" Elections Act.  Andrew Coyne writes:

Unable to answer its critics’ objections, the government has lately shifted into attacking their character. Mr. Poilievre told a Senate committee Tuesday the CEO, Marc Mayrand, is motivated by nothing but a desire for “more power, a bigger budget and less accountability.” The former Auditor General, Sheila Fraser, other government members hinted, was on the take: hadn’t she accepted payment to sit as co-chair of Elections Canada’s Advisory Board? The board’s other members, among them some of the country’s most widely respected political and legal figures, were dismissed by a Tory senator as “celebrities.” The provincial chief electoral officers, political scientists, law professors and other specialists who have denounced the bill were derided as “self-styled” experts. The only people, it would seem, with the integrity or the expertise to comment on the bill are the people who have drafted it to their own advantage.

There’s precedent for this, sadly. It is of a piece with the government’s previous attacks on the former parliamentary budget officer, Kevin Page, and the current Auditor General, Michael Ferguson. Like the CEO, their criticisms were dismissed as incompetent at best, partisan at worst — though, like the CEO, both were appointed by this government. This is more than a baseless smear on three conscientious public servants. It is an assault on their independence and authority as officers of Parliament.


Stephen Harper came to Ottawa to wreak vengeance -- first on the Liberal Party, then on civil servants, and finally on government itself. Even Mr. Harper's former director of communications, Geoff Norquay, has suggested that Mr. Harper is getting even for the "In and Out Affair."

Stephen Harper and his trained seals have been singing the same songs since opening night. Clearly, the time has come to shut this show down.

Imagine, putting the prime minister's personal Beria in charge of rigging Canada's election laws. Harper's choice was not based on knowledge, experience or ability but on the little shit's reliability.

Harper's choice of Poilievre, Mound, is proof that his success has been based on his ability to attract and retain hit men (and women).

"Stephen Harper came to Ottawa to wreak vengeance -- first on the Liberal Party, then on civil servants, and finally on government itself."

He is now wreaking vengeance on the people who had not voted for him, that is, 60% of voters.

For once, Trudeau seemed to work in tandem with Mulcair very effectively in QP yesterday. Trudeau continued pressing Harper on the "Fair" Elections Act instead of diluting Mulcair's very effective attacks on this topic with his usual tiresome questions on why Harper is not helping the middle class.

If only the Libs and NDP would work together instead of attacking each other and focus on getting rid of the common threat.

Just heard that the Ottawa District Carleton School Board had voted for a public hearing on the "Fair" Elections Act.

Hopefully, other school boards will do or have done the same.

What can be done when this bill passes into law and then in 2015 the Harperites are returned to power in a blatantly crooked election that Elections Canada is not allowed to investigate or report on?

It is indeed long past time to shut down this traitorous anti Canadian & antidemocratic regime down. The trouble is there is no means to do so until the next election and by then they may well be in full dictator mode, and no meaningful independent investigative or enforcement powers left to stop their cheating ways!

Harper's arrogance is only exceeded by his hatred of all things Canadian that preceded his illegitimate rise to power Owen.

"“It is a fundamental breakdown of a parliamentary institution to see a sitting Minister of the Crown attack independent officers, present and past, of parliament. It’s ad hominem, it’s personal, it’s unprovoked and it’s certainly undeserved‎,” Mr. Mulcair said, later arguing Prime Minister Stephen Harper is pushing the bill through to “front-load his cheating for the next election.” (Many of the bill’s provisions are expected by some observers to favour the Conservatives, such as expanding partisan appointments at polling stations, hiking donation limits, creating campaign spending loopholes and stopping short of full rules to limit robocalls.)"

And Trudeau is claiming given the chance he will repeal the bill;

"Liberal Leader Justin Trudeau called the bill a "terrible piece of legislation" on Wednesday, one he also said is designed to favour the Tories. He pledged to repeal it if his party wins the next election and he becomes prime minister."

On the prepubescent teen behaviour of Mr. Poilievre a British 'elections' expert flat out and indirectly told Mr.Poilievre to shut-up in his stiff upper lip polite British manner;

"“What I would stress, though, is that the debate about the appropriate role of Elections Canada should revolve around matters of institutional structure rather than personalities,” the veteran researcher and elections expert said, later adding: “I do think it’s important we don’t make groundless accusations against senior electoral administrators.” -Mr. Pinto-Duschinsky.

But then Owen I don't think Mr. Poilievre can help himself after all he was born with a lie exactly in the middle of his last name.

I hope my fellow Canadians are at last paying attention as this is one of the most important if not THE most important political moments in Canada in our lifetimes. Canadians will you be able to say you were able to stand up and stop a want to be despot from taking over and destroying Canada by voting him out? I sincerely hope so.

That certainly appears to be their plan, Rural. They'll find it harder to accomplish as long as Sheila Fraser calls them on it -- and Thomas Mulcair calls Pierre Poilievre a lightweight.

The agenda isn't hidden, Mogs. It's blatantly open for all to see. It's time to mobilize voters.

The opposition are going to have to work together to shut his show down, Anon. Harper is counting on their inability to cooperate to keep him where he is.

Like you, Mogs, I hope they are paying attention. Now is the time to mobilize Canadians. This is too important to wait until the next election.

The shame is the voters do not seem to care.

If they cared, Steve -- really cared -- they would have seen through Harper long ago.

It always amazes me that, people just don't see through Harper. To me Harper as a dictator, he fits that profile. All dictators have very similar personalities. The paranoia, arrogance, selfishness, grandiose plots and plans, of mastering the world, a sociopath that only loves himself and to hell with the people.

Harper does not have one decent bone, in his entire body. Harper also has no ethics nor morals either.

You would think that by now, Anon, people would have cottoned on to Harper. Unfortunately, a goodly number of them are still star struck.