The Stench Keeps Getting Stronger 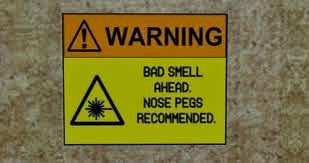 Geoff Norquay -- Stephen  Harper's former Director of Communications -- believes that, with the RCMP's decision to drop its investigation of Nigel Wright, the Senate scandal is off the public's radar screen. But Michael Harris asks the question we should all be asking ourselves: "Does the RCMP work for us, or the PMO?"

The stakes are high here for all concerned. The hallmark of the Harper government is the impulse to politicize everything from science to the running of elections. Is justice being added to the list? There is a growing suspicion that the RCMP is now the prime minister’s police force.

The Mounties' decision is of a piece with other actions they have taken:

During the 2011 election, RCMP officers assisted in the ejection of non-Harper supporters from a Conservative rally in London, Ontario. The unwanted attendees had posted pictures of themselves on Facebook attending a non-Conservative rally and had been spotted by organizers of the London event. The Mounties later admitted that tossing the students out “was not in accordance” with the RCMP’s mandate. But it was perfectly in keeping with the Harper Police mandate.

The RCMP also forced down a small plane flying over Ottawa and Gatineau with an anti-Harper sign. The sign was produced by the Public Service Alliance of Canada; 20,000 PSAC members had been slashed from the public payroll by the Harper government. The sign read, ‘Harper Hates Us.’

Vigilant Mounties on the ground ordered the plane to return to Rockcliffe Airport, where the pilot, Gian Ciambella, was told that his sign could be construed as hate speech. He was also told that the Mounties are responsible for the prime minister’s safety.

Despite a fanciful story that Ciambella had flown too close to Parliament, Transport Canada later confirmed that the pilot had never entered restricted airspace. The Harper Police had ordered down a Piper-Super-Cub flown by a pilot towing a sign to make his living — an anti-Harper sign.

The spin is that the RCMP has been tasked with guaranteeing the prime minister's personal security. But it's beginning to look like their job is to ensure Mr. Harper's political security.

The stench from the Harper bunker keeps getting stronger.

Email ThisBlogThis!Share to TwitterShare to FacebookShare to Pinterest
Labels: The Wright-Duffy Affair

The stench indeed has been strong for a long time Owen, problem is that so many of us go around with our noses plugged. The whole 90K cheque thing indeed still stinks to high heaven but we can now count on the fact that anyone who questions it will be ridiculed. I haven't seen anything yet, but has the great statesman been asked if he will be taking Nigel back into his inner circle now that charges aren't forthcoming. Truth is they'll probably avoid asking it because Nigel actually never really left. Geesh we're such a gullible bunch in this country.

If we can't see through this ruse, waterboy, we deserve everything that befalls us.

Wright made it clear that, if he was charged, he would not lie to protect Harper. Wright is now off the hook which means so is Harper, Perrin and the rest. I suspect that Harper leaned very heavily on Paulson and the commish delivered, again.

It was a nice touch clearing Wright while all eyes were on Toronto for Flaherty's funeral.

Its a crime. Of course after he is finished rigging the elections, he will make police corruption legal.

Lock up people for gardening, but for poisoning democracy a pay raise.

He can't trust people to make the right decision, Steve. He has to make sure they decide in his favour.

Geoff Norquay is entertaining. His contention that the 'Fair Elections Act' is an act of revenge by the Harperites against Elections Canada is enlightening.

And the idea that the Harperites played no role in the RCMP downing of a small airplane towing a banner critical of Harper is also entertaining. Or perhaps the Harperites have corrupted the RCMP to such an extent that they automatically take steps to provide political cover for Harper.

The question of the RCMP's connections to Harper have been around since his first election victory, Anon.

Their investigation of Ralph Goodale's office in the middle of that campaign has never adequately been explained.

If you are an anti-Harper commenter on blogs or in newspapers and you find yourself being pulled over by the RCMP - immediately telephone someone and tell them what's happening and then leave your phone on so they can listen in. If your phone has a record setting use it.

The RCMP is not a trustworthy force on a number of levels.

The possibility that the RCMP have corrupted themselves in the interests of the sociopaths in the Harper party is truly sad.

If you recall of the RCMP in BC? Nothing the RCMP does surprises me. I read, the RCMP were just given another raise. Anything to do with the RCMP reeks, right up to the Space Station. People of BC didn't want the RCMP contract to be renewed. Nor, do they want the RCMP as icons for Canada anymore either.

To me Harper is a fascist and a dictator and he will use every dirty tactic in the book, to cheat this election, as he did the last election.

If Wright, Duffy and Wallin go down so will Harper so, the fix is in.

Unfortunately, Dana, Canadians are getting the idea that -- since the advent of the Harperites -- they can't trust a number of their institutions.

The government seeks to sow its own paranoia among the general public.

Perhaps the fix is in to make sure that they won't go down, Anon.

It truly is a sad situation, Anon. But everything these folks touch is turned inside out.

Owen I don't think nose pegs would be advisable at this juncture, I believe full on gas masks are the requirement now that we know the RCMP considers Harpers security 'Harper's political longevity' at any cost. After all they pepper-sprayed peaceful demonstrators at the behest of Mr. Chretien and we know Mr. Harper is a whole lot more vindictive than Mr. Chretien ever was or could be for that matter.

We may need them to vote next spring as the RCMP may well be tear gassing the voting booths where Harper cannot win, he seems to be trying everything to dissuade non-conservative voters.

It's distressing to see Mr. Harper still have so much sway over our at length people and institutions, Mogs.

He really is intent on getting his way.

Just on the spin; look at practically the only Con's you can even get on a panel- Norquay.
Powers. Elise Mills For Prosperity. That Gerry guy on Matin's show, every week.
Pretty thin gruel, and you can barely nail down an actual MP to appear. Ever.
It's a fr*ggin' joke, really!
I find humour in it, what can I say?

It's hard to find good spokespeople, Loving It, when they're not allowed to write their own scripts.

of course Wright isn't being prosecuted. when it all hit the fan, it was reported Wright was cooperating with the RCMP. so if he did, then he may have gotten "a walk". if he wrote the $90K cheque and there was wrong doing, then there had to be intent. if it couldn't be proven in court, the RCMP would have given him a walk. if wright said anything interesting to the rcmp, then we don't know about it. Now as to the CEO of the RCMP we need to ask, what is more important to him: his job or his country. My money is on his job and for that he needs to keep oil can happy. nothing much will happen to wallin and duffy because they can hit the talk show circuit and write books. if anyone wears any of this it will be the first nations senator. he can't fight back like the others.

harper simply reminds me of Putin. Putin reminds me of Hitler, so there we go. At least Anders constituency saw a need to remove one of these Cons. We can only hope other consitutencies follow suite.

There are signs of rebellion in the ranks. We'll see just how strong the Putin analogy is, e.a.f.

If Harper can stem the rebellion, he really is another Putin.