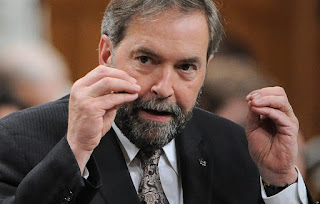 Last week, Tom Mulcair declared that the four pillars of the New Democratic Party were environmentalism, pacifism, feminism and socialism. Gerry Caplan -- who has been a Dipper longer than Mulcair -- writes:


I join the applause, or at least three-quarters of it. I can march behind the banner of socialism, feminism and environmentalism with pride and conviction. But pacifism, not so much. In fact pacifism has never been an NDP value, assuming that words have any meaning.

It's true that J.S. Woodsworth, on the eve of World War II stood in the House and declared that he could not support the resolution to go to war because he was a life long pacifist:

But this was not CCF policy and he stood alone. His party revered him enough to allow him to take this idiosyncratic stand, but no other CCF MP joined him. Prime Minister Mackenzie King also generously expressed his deep respect, calling Woodsworth an “ornament to Parliament.”

One can work for peace and not be a pacifist:

Pacifism is not merely a strategy or approach to be applied to a particular crisis. It’s much more: a philosophy or theory, and if you embrace it, it applies in all situations. A great deal has been written on this surprisingly complex subject, including by one writer who explains that “a pacifist rejects war and believes there are no moral grounds which can justify resorting to war. War, for the pacifist, is always wrong.”

As well, in practical terms, for genuine pacifists violence is never the right answer to any crisis, because it always makes things worse. So its use must always be opposed even when it seems naive or foolish. Hitler and the Second World War are the shorthand examples of this naïveté. You can believe in non-violent resistance to injustice without being a pacifist. And sometimes, force can only be met with force.

And, thus, we have another illustration of Tom Mulcair's problem. For all his talent, he never quite fit in his party.


Tom was never a Dipper and, while most are reluctant to admit it, the NDP rank and file knew it. Mulcair wanted to lead a Blairified NDP, one well shorn of its Leftist roots. That said, many New Dems were happy enough to jettison their party's principles if that was the price of a shot at power.

Now they face the existential question, Mound. What is their purpose?