They Still Stand In Awe Of Harper 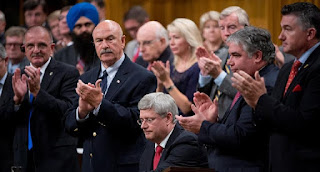 is a one-woman wrecking crew for the party of MacDonald and Mulroney. She parroted the Harper line, signalling that the CPC hasn’t learned a single thing from its recent electoral thrashing. She represents the abyss, not renewal.


Leitch, however, isn't the only former cabinet minister with a Harper obsession:

Take Peter MacKay. When Harper finally left public life, MacKay had a chance to be his own man, or at least what is left of that commodity. Instead, in a sucky and transparent attempt to woo the old Reform wing of the party who might be useful should he decide to run, he dipped deep into the wells of sycophancy and sang Harper’s praises — for leaving his “indelible” mark on the country, for steering Canada through the recession, and for getting the nation’s books balanced.


Those who survived the last election keep repeating Stephen Harper's view of the world:

They continue to play the violin for Stephen Harper. They continue to act as though the loss in 2015 was the result of great ideas poorly articulated, rather than a decade of tyranical one-man rule that very nearly ruined the country with Harper’s warmed up version of Northern Republicanism. Remember how Harper himself mused about banning the niqab in the federal public service, but denied that his government’s anti-Muslim ranting had anything to do with attacks on Muslim women? Trump-like? You know it.


And they refuse to look at the election results:

The party lost the youth vote and young females. It lost First Nations people, scientists, and immigrants. Someone has got to figure out a way to get them back — and it isn’t more tax cuts for wealthy corporations, niqab bans, information blackouts, or rat lines.


Harris suggests that perhaps Michael Chong is the only leadership candidate who doesn't doesn't still stand in awe of Harper.

Image:ocanada.com
Posted by Owen Gray at 8:23 am

Email ThisBlogThis!Share to TwitterShare to FacebookShare to Pinterest
Labels: The Harper Party

Despite the manifest failure of their agenda, Owen, many of the party's stalwarts continue to genuflect at the altar of Harper. Like any other form of fundamentalism, such behaviour is very hard to comprehend.

As with several versions of fundamentalism, Lorne, that faith is misplaced.


It may take some years in the desert, Owen, to purge the Conservatives of that toxic ideology.

They appear to be slow learners, Mound. It may take a long time to conquer the virus.

.. Michael Harris is a Canadian gem ..
Its all fastballs from him, bringing the heat..
Why does he not have a daily column.. ?
Would save me a lot of reading .. ...

He's a superb journalist who documents everything, salamander.