Facts That Don't Suit Its Agenda 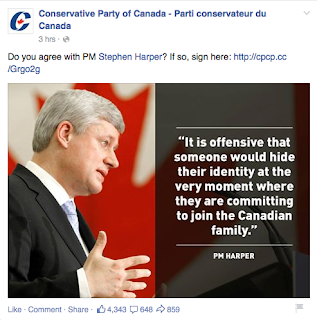 Andrew Coyne used to sing the praises of the Harper Party. That was before he discovered that they were not who they claimed to be. Stephen Harper may be gone, but his party is still a fraud. Take the issue of putting a price on carbon. Coyne writes:

The party of free markets, rather than support a plan that relies on the quintessential market instrument — prices — favours the most costly, intrusive and regulatory-heavy approach imaginable: the very approach that has so signally failed to date. The party of personal responsibility favours sparing people the costs of their economic choices, either socializing them via subsidy or disguising them via regulation.

All of the party's leadership candidates -- save one -- are vehemently opposed to putting a price on carbon:

Yet the position of the Conservative party, and of virtually every one of its leading lights, is flat-out opposition to carbon pricing, in whatever form. Of the federal party leadership candidates, only one, Michael Chong, has come out in favour. The other 87 or so are all opposed. The official line remains the same: it’s a “tax on everything,” and they want no part of it.

British Columbia has had a carbon tax since 2008. Alberta will have one in place by 2018. Ontario and Quebec are implementing cap-and-trade regimes. That’s 80 per cent of the country, by population, where carbon pricing is now law. And in six weeks the government of Canada will formally commit the country to the Paris climate accord, together with its Intended Nationally Determined Contribution, UN-speak for emissions reductions target. By year’s end, the Trudeau government has signalled it will have a national carbon price in place, with or without the provinces’ cooperation.

Email ThisBlogThis!Share to TwitterShare to FacebookShare to Pinterest
Labels: The Conservative Party

It amazes me because the carbon tax has a dubious record of efficacy and is exactly the "solution" that you would think that Cons would favour. I suppose they have to admit that there is a problem before anything. None of the parties (including the Greens) have what I think is a realistic, socially minded, answer to the carbon problem. That is because such and answer requires a shift in legislation as significant as the shift int he 1930s that dealt with the crisis of capitalism that was threatening then. Governments need to force car makers into only making efficient cars and be the instigators of a huge shift toward renewables. Carbon pricing won't do that. Is it an example of the Dunning-Kruger effect or just plain old ideology?

Could be, Kirby. Certainly, Donald Trump is an outstanding example of of the Dunning-Kruger Effect.

I wouldn't say never. After all, in 2008 the Harper Government ™ did propose a cap-and-trade system of carbon pricing. Of course, the current Cons have thrown that inconvenient fact down the memory hole.

I wouldn't put it past them to change policy, Anon. But it doesn't look like the change is just around the corner.

Reality is what can be sold. Sooner or later bad reality is bankrupt. We face massive bankrupty, gather your chickens and what you can trade because the end is comming hard. Canada will fare well but the problem is we will be already owned by the Chinese.

Reality can be a stern teacher, Steve. And it should teach us that we can deal with the Chinese, but we don't have to sell out to them.

We can expect that any carbon tax enacted by the Liberals will not be painful enough to force any change.

There's the rub, Toby. It's necessary. But will it do the job?

Marc Lee of CCPA says, "Most of the carbon tax revenues (2/3) have been in support of corporate income tax cuts, plus 17 per cent to personal income tax cuts, 12 per cent to a credit for low-income households, and small amounts for a bunch of boutique credits, some of which have nothing to do with carbon."

"The low-income credit, in particular, offset the carbon tax for the bottom 40 per cent when it was first introduced in 2008,but as the tax has gone up, the credit has not, making that whole regime regressive -- that is, low-income households pay a greater share of their income to the tax than higher-income households."

Thanks for the link, Anon. If a tax increases income inequality, it's simply perverse.